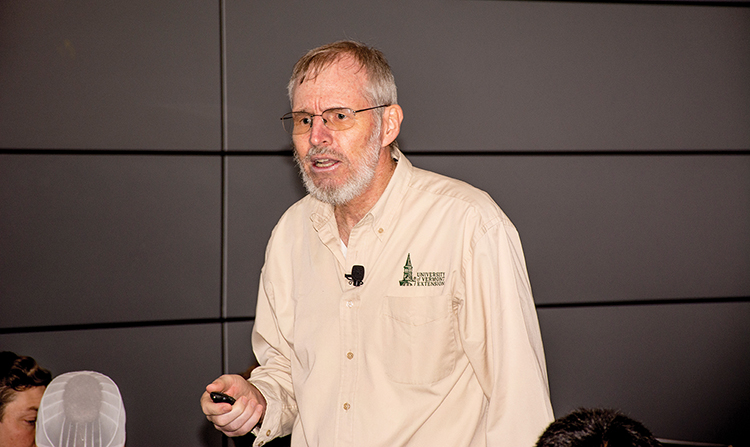 These days, dairying isn’t for the financial faint of heart.

Wild and scary price swings have become normal in the industry, occasionally plunging below the cost of production long enough to be fatal for some.

How volatile have they been?

In the last eight years, monthly Class III prices have ranged from a staggering high of $24.60 per hundredweight to a staggering low of $9.31.

No matter how carefully producers step, there’s no guaranteed way to make it through that minefield. But there are some good tips, which University of Vermont agricultural economist Robert Parsons (above) gave during his World Dairy Expo seminar this month, “Surviving Low Milk Prices.”

He had three major take-home messages for producers, the first one being a dose of encouragement: “If you are still here you have proven you are sustainable,” he said.

The third was action. “Don’t hesitate to identify and set plans into motion. Don’t allow your farm business options to disappear because of inaction.”

Parsons’ talk was mainly directed at small farms, which often have lower production per cow and lack economies of scale, putting them at a disadvantage to bigger operations. As a result, their top challenge tends to be generating enough profit to cover their major expenses that keep rising: family living costs and health insurance.

But his basic suggestions apply to operations of all sizes:

The number of examples he cited suggests that none are more important than cost control — reducing waste, getting the most out of every dollar spent, and always looking for ways to spend fewer of them.

It’s an area with virtually unlimited potential for scrutiny; everything from reducing calf mortality to identifying cows that aren’t paying their way to using one less squirt of teat dip per cow. His point is that they all add up.

But Parsons also emphasized that effective cost control can’t be a one-person job, because insight and good ideas can come from everyone on the farm. As a result, owners and managers should actively engage — and reward — employees for suggestions that make a positive impact.