What would you do if a TV crew called you?

That was the situation faced by Pete, Theo, and Charlie Knigge during the extremely busy week of World Dairy Expo. The phone rang on Wednesday, and by that Friday, a full production crew — with 18 vans — descended upon Knigge Farms to tape what eventually would became the fourth episode for “The Bachelor” in its 21st season.

Fast-forward . . . that episode airs this evening, Monday, January 23, on the ABC television network at 7 p.m. CST. If you plan on watching it with your family, please note it is an adult-themed show.

While “The Bachelor” television crew was onsite for an entire day taping, the Knigge family will learn what video made the episode by watching the show.

What follows is the January 25, 2017 Hoard’s Dairyman People Side column by Andrea Stoltzfus as she interviews the Knigge family about the experience. The slide show at the beginning of this Hoard's Dairyman Intel contains candid photos taken the day of the taping on October 7, 2016.

Also, Yahoo shared a preview of the January 23 episode. As Knigge Farms wrote on its Facebook page, "It may not be bachelorette contestant Corinne's ideal date but if you want to learn more about where your food comes from and see a modern dairy farm using some of the latest technology, this is a great interaction with consumers."

What would you do if a TV crew called you? 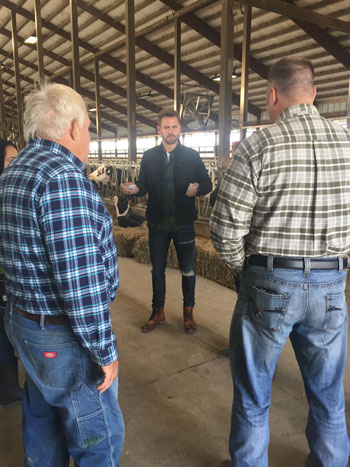 Pete and Charlie Knigge with Nick Vaill,
The Bachelor.

If someone called your farm claiming to be from a television reality show, how would you respond? Politely decline? Think it was someone retaliating on a past prank? Or recognize it as an opportunity?

Pete Knigge, of Knigge Farms in Omro, Wis., was faced with just that situation in October 2016, when a Wednesday phone call came in asking if they would be interested in opening up the farm for a TV show . . . in two days.

“We do farm tours all the time,” Pete said, “and we didn’t have any scheduled for the next day. So I told her she could come out on Thursday to check out our place.”

“The woman got out, gave us her name, and started asking questions about the farm,” Pete said. “She had a few activities in mind, like a hayride and shoveling manure. But we still didn’t know what show she was working with.”

After talking with Pete, his wife, Theo, and their son Charlie, the woman said the farm would work and said they would return on Friday with a camera crew. Pete asked for a business card for contact information.

“After looking in several places — her purse, her briefcase, the car — she couldn’t find one,” he said. “That was really setting off red flags, and we were thinking the whole thing was a joke. Then she finally found one with her name on it. I turned it over and it said ‘The Bachelor’ on the back.”

Pete and Charlie learned that the show had been filming in South Carolina but were forced to leave because of a predicted hurricane. The show relocated to Wisconsin, filming in Milwaukee, and then searching for a rural farm to round out the episode. Looking on the internet for farm tours, they discovered Knigge Farms.

Knigge Farms has an active Facebook page and is linked with online travel sites. Keeping this presence current has led many people to the farm. During the summer months, the Knigges host two or three tours a week for vacationers.

“I have met some of the nicest people from all over the world,” said Pete, whose dairy was the first in the U.S. to milk with robots.

The producer promised to return on Friday with a camera crew and the show’s contestants. Charlie said she had a few suggestions for making the farm “TV ready” and suggestions for the farm team’s wardrobe.

“We were told we couldn’t wear any hats or shirts that had logos or brand names on them. What farmer doesn’t have a cap with a logo on it?” asked Charlie.

The first vehicle to arrive on Friday was an ambulance with EMTs and paramedics. They introduced themselves and told the Knigges a medical crew had to be on-site the entire time the cast and crew were there.

Soon after that, vans drove in, backed up to the milk house, and started unloading equipment. The production crew took over the milk house and the office, and set up tables and control panels to help monitor the six cameras to be used. They also set up antennas and wires so they could remotely send signals to the microphones and cameras.

“The setup took about an hour and a half,” Charlie said. “It was really fascinating to watch.”

Then, Nick Viall, “The Bachelor,” arrived. Charlie and Pete went out to meet him and introduce themselves and talk about the farm.

When the ladies who were appearing on the show arrived, Pete and Charlie tried to engage them in conversations about dairy farms. Standing in the calf barn, several of the women enjoyed seeing the calves and started asking questions.

“We didn’t have much time to talk to them, but some asked good questions,” Pete said. “One woman had grandparents in Fond du Lac (Wis.), and she had actually milked a cow. On the other hand, some of the women didn’t enjoy being on a farm at all.”

Contest yes, but no raw milk

One of the tasks the show’s producer wanted the women to complete was to milk a cow by hand. This proved a bit of a challenge, as the Knigges use two automated robots to milk their 120 cows. Using their grandson’s show cow, they had a cow they could milk.

“After they milked the cow, the producers wanted the contestants all to drink the warm milk,” Charlie said. “We had to explain why they couldn’t drink the raw milk and made it very clear that if they were going to drink warm milk, it would have to be store-bought, pasteurized milk.”

That portion was really the only segment that made the Knigges uncomfortable, they said. Milk was purchased, heated, and the contestants drank it. “We hope that if that part airs, it is edited to include our concerns,” Charlie added. “With hours and hours of footage, it might not even make the final cut. That was difficult, not knowing what they would use for the final editing.”

For the most part, Charlie and Pete were bystanders, though Charlie had some scripted lines and was available to help with farm equipment. Pete was able to remain by the monitors, so he could see the crew as they moved around the farm. Pete and Theo’s daughters, Krista and Mary, were also on hand to help and keep an eye on things.

Several aspects of the taping were interesting to the family, including expanding the “no logos” on clothing to “pretty much everything.”

“There was one person here who had about a dozen rolls of duct tape in all colors, and his job was to walk around the farm covering up all the names and logos on signs, buildings, equipment, you name it,” Pete said. “One of our neighbors came over in his Gator, and the man walked over with his tape and covered up the logo on that, too.”

New shovels, boots, and gloves, purchased by the crew, had been treated so no brand names showed.

The producer’s list of “farm jobs” included feeding calves, feeding hay, and shoveling manure. With an automated calf feeder, large square bales, and a freestall barn, the Knigges had to work a little to make that happen. They brought out bottles for the calves, borrowed some small square bales, and used a skid loader with bucket for the women to shovel manure into.

They also borrowed a neighbor’s hay wagon with sides, so Charlie could drive Nick and the women on a hayride through the heifer pasture. The finale to the day was a “cheese roll,” where ladies each stood on the top of a hill in the pasture and rolled a goat cheese wheel from LeClare Farms . . . down to the Bachelor waiting at the bottom.

“They asked us if we had any steeper hills than that, and could we make the footing muddier by running a hose over the hill,” Pete said. “I told them those were the steepest we had and, no, a hose wasn’t possible.”

“I had never seen the show,” Charlie said, “but I have talked to a lot of people who really like it and follow it closely. But after seeing how they film it, I am not sure why someone would want to be on it.”

The Knigges’ goal for the experience was not to gain celebrity themselves, but educate the nonfarm contestants, crewmembers, and eventual viewers about the dairy industry. “Some of the women didn’t care, but some were genuinely interested in the farm, and several of the crew asked good questions,” Pete said. “We looked at it as a unique and fun opportunity to promote the dairy industry.”

The Knigges were told “The Bachelor” episode would air in late January. “The entire episode was filmed at different locations in Wisconsin, so I don’t know how much time the farm will actually get,” Charlie said. “It’s an experience we will remember.”