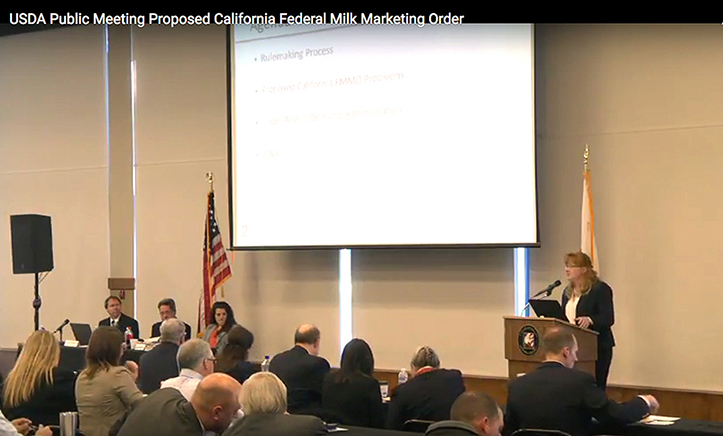 Little, it seems, is going to proceed quickly about California’s effort to join the Federal Milk Marketing Order (FMMO) program.

The most recent example was a first of its kind public hearing held February 22 in Clovis, Calif., by USDA to “explain the whats and the hows of the recommendation that was put forth (February 9) by the department,” said hearing moderator Dana Coale, Deputy Administrator of the Agricultural Marketing Service Dairy Program. “We will not be addressing the whys,” she emphasized.

The meeting was neither exciting nor fast-paced, and it can be seen in its entirety on the internet by clicking here. If you do choose to watch, immediately fast forward to about the 27:30 mark, which is where the proceedings finally get started.

It was, however, also a fascinating meeting for a handful of reasons, including the fact it was the first of its kind for USDA following announcement of a Recommended Decision for an FMMO.

Also, Candace Gates, chief of the California Department of Food and Agriculture (CDFA) Dairy Marketing Branch said she was on hand to learn about what form an FMMO would take in California and that, “We are currently looking at our authority to administer the California quota system as USDA has outlined in the Recommended Decision to establish a California FMMO. During the process we will determine if our current authority is sufficient, or if changes will be needed to allow the California program to be administered as a stand-alone quota program.”

Coale said Gates was not there to answer any questions about CDFA’s potential role.

An extra-long 90-day public comment period is currently underway for any interested person or group to submit comments, questions, or proposed changes to USDA’s California FMMO proposal, which can be seen at here. Comments are due no later than May 15.

The first hour of the meeting was a detailed recap by USDA of the program that has been proposed. It was followed by a 37-minute break for those in attendance to confer and work up questions to ask afterward, so skip that part of the video. The question and answer portion of the video starts at about the 2:13:00 mark.

More than 50 questions were submitted by the audience, many of which were very technical and involved pooling, depooling, payments and payment deductions, and reblending. Some answers were long and equally technical. Previously submitted questions were also read and answered, including a series of eight that sounded like they were exploring pooling versus non-pooling loopholes.

Coale said it is the hope of USDA, after it receives and reviews all comments submitted, to issue a final FMMO proposal sometime this fall. After holding producer and processor informational meetings are held, the proposal would then be put to a producer referendum vote.