By Chad Dechow
The author is an associate professor of dairy cattle genetics at Penn State University. 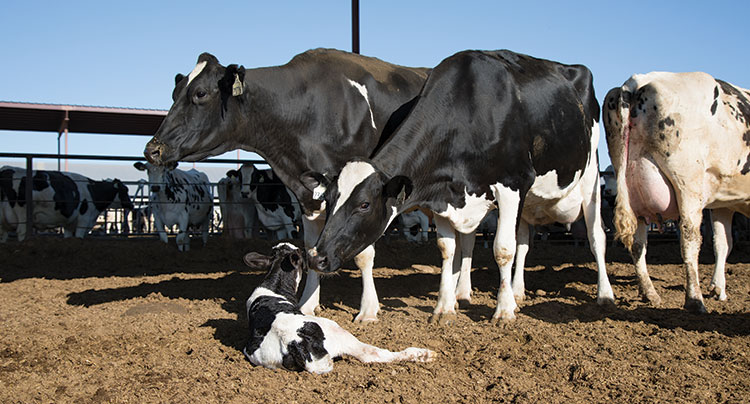 Not only can twins cause cows to calve early, but so can their genetics. By understanding variation in gestation length, farmers can reduce the number of cows that calve in the close-up pen, rather than the maternity pen.
Determining a cow’s due date is an imprecise science. We can predict the date for most cows within a day or two, but the sex of the calf, season of year, and geographic region all play a role in determining gestation length.

For instance, heifer calves are born a day or two earlier than bull calves on average, and twins four to five days earlier than single births. With the use of ultrasound, those sources of variation could be considered when projecting a due date.

Thanks to efforts by scientists from USDA and CDCB (Council on Dairy Cattle Breeding), we can now predict due dates more accurately because we can better account for the genetic component of gestation length. Gestation length PTA (Predicted Transmitting Ability) was officially released by CDCB for the first time in August. Sires and cows that have been genotyped now have gestation length PTA available.

As you can see, gestation length is shortest for Holstein and Jersey, and longest for Brown Swiss and Guernsey. Parturition also occurs a day or two earlier for first-calf Holstein, Jersey, and Milking Shorthorn heifers than for cows of the same breed.

Bull studs may not have gestation length published on their animals yet because it is a new trait, but the data will become increasingly available to producers. There are many potential uses for this new data.

The most important use will be more accurate prediction of due dates. Producers will be able to reduce the frequency of cows accidentally calving in a close-up pen rather than in the maternity pen. On the other hand, producers can avoid cows taking up valuable space in the maternity pens that are not likely to calve for another few days. Dry-off dates can also be adjusted based on more accurate due dates.

Nonseasonal herds may also benefit from altering gestation length to some degree. A repeat breeder that is later in lactation could be bred to a shorter gestation length sire to help shave a few days off its calving interval.

While this may not be a large concern to most producers, more accurate prediction of due dates could help those trying to breed next year’s show calf. Knowing that a given sire has short gestation length could help to avoid the risk of a calf being born on the last day of November or February.

Smaller producers who use paper records and breeding calendars to monitor due dates can easily benefit from knowing a bull’s gestation length PTA. It is somewhat trickier for larger herds that rely on herd management software.

In some instances, software doesn’t readily accommodate differences between breeds much less different sires within a breed. I expect that the more advanced software programs will accommodate this capability in the future, but that does not mean gestation length PTA can’t be used by larger herds currently.

Probably the easiest use they can make of such data is to simply avoid sires that are outliers in either direction. Thus, they can rely on breed average gestation length and most cows will calve in the expected window.

It is clear that there are potential management applications to knowing a sire’s gestation length PTA, but is average gestation length a trait that we should consider changing over time? Probably not for most breeds. Most research suggests that gestation length is a trait with an intermediate optimum.

It remains an unanswered question whether breeds with longer natural gestation lengths, such as Brown Swiss, would benefit from selection to reduce the length of pregnancy. Most research on optimal gestation length is based on Holsteins, and the results may be different for other breeds.

Despite an intermediate optimum, there is some evidence that there is a genetic trend toward shorter gestation length in Holsteins beginning in about 2000. Emphasis on calving ease could be part of the reason by causing a correlated decline in gestation length. For instance, O-man was a Holstein bull that had a large influence on the breed. O-man was known as a calving ease bull and was also an outlier for shorter than average gestation length.

The CDCB has been busy developing many new traits to improve our selection programs. For most of these traits, we want to improve the population to develop more efficient and healthier cows.

Gestation length is a different kind of trait. We may not want to change gestation length dramatically, but knowing when a cow will calve with greater confidence will help refine our management protocols.