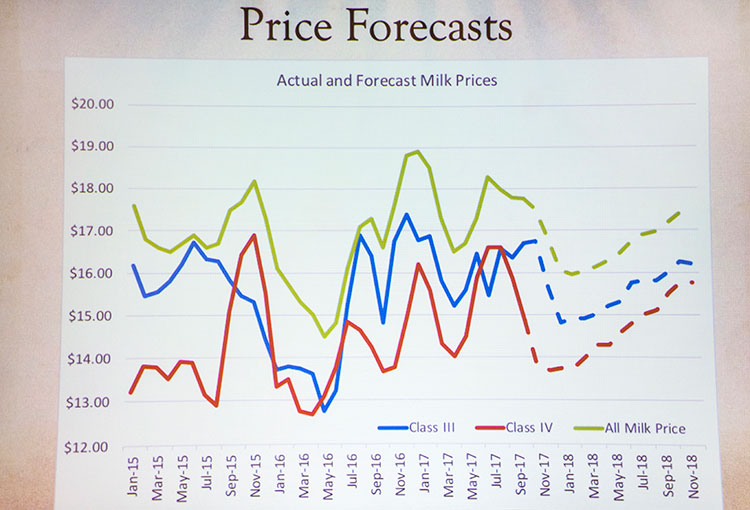 “Unless circumstances change significantly on the export side, I have a hard time being very optimistic about prices in the short run,” said dairy economist Mark Stephenson, director of dairy policy analysis at the University of Wisconsin-Madison, at the 2017 National Agricultural Bankers Conference November 15 to 17 in Milwaukee, Wis.

“I’m now forecasting that the Class III price will be down 65 cents per hundredweight, Class IV down 40 cents, and the All-Milk price down nearly $1,” he said.

“I’m sorry I can’t be more cheerful, but right now I can’t do too much else. I think we need to clear the markets of some of the excess that we have in both production and in stocks of product.”

He explained that previous significant downturns in the All-Milk price have corresponded perfectly to times when the U.S. was off trend in dairy product exports. “The reason, obviously, is that these products stay at home and the first thing that happens is stocks start to build, and that puts downward pressure on prices,” he said.

“Our stocks built in 2016, and they are still building in 2017,” he noted. “Pretty soon something has to give, and that is probably price so we can sell more product.” 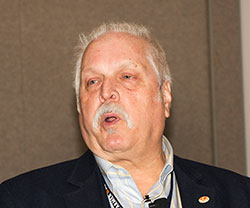 Mark Stephenson
Stephenson said part of the problem is the U.S. is making more milk than it can sell right now. Output has been down in the West and Southwest much of this year, but higher production in the Upper Midwest and Northeast, which is being driven by quickly rising milk per cow, has more than made up for it.

The result has been more dairy products being made available to a world marketplace that is already flooded with milk proteins. In response, nonfat dry milk powder prices have dropped roughly 30 percent this year.

Lower production is usually farmers’ reaction to such situations, but Stephenson said it hasn’t happened yet because milk prices have not dropped below fixed costs. However, he noted that there are signs financial stress is building on many dairies.

“Our farms are getting to the point that they’ve been consuming capital and not replacing equipment that probably should be replaced, and I also hear from feed dealers, equipment manufacturers, and veterinarians that open accounts are growing,” he explained. “So we have evidence there is real pressure on a significant number of farms.”
To comment, email your remarks to intel@hoards.com.
(c) Hoard's Dairyman Intel 2017
December 4, 2017
Subscribe to Hoard's Dairyman Intel by clicking the button below
Related