Dairy has a huge stake in beef sales

While market cows have improved based on reduced lameness scores and more body condition consideration and carcass quality, we can still do more.

By Keith Belk
The author is professor of animal sciences at Colorado State University, where he holds the Monfort Chair. 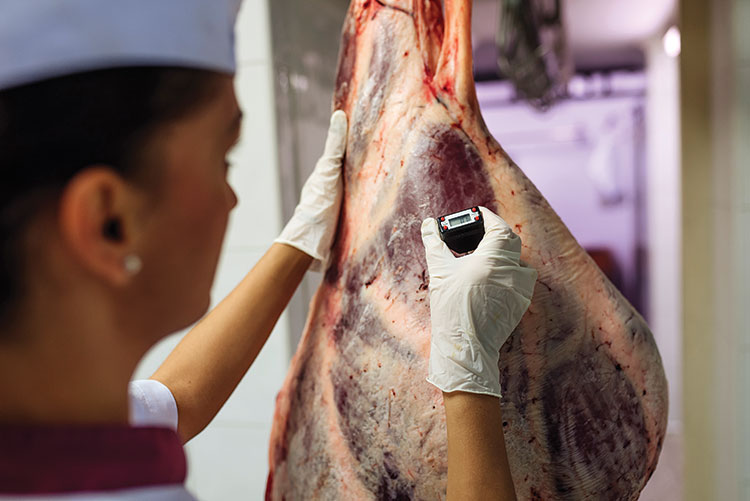 Outside of milk sales, beef is the second-largest income source for many dairy farms. With some additional fine tuning, more income could be realized from market calves, cows, bulls, and steers.
The value that dairy calves, heifers, cows, bulls, and steers have in the beef industry is significant. In fact, dairy animals of all types are estimated to contribute 20 to 25 percent in any given year to the U.S. beef market. Paying attention to how these animals are handled prior to processing has a significant impact on each farm’s revenue.
Recognizing this importance, the beef industry conducted its first market cow and bull beef quality audit in 1994. That audit assessed quality-related strengths and shortfalls of beef from market cows and bulls and established a benchmark to determine further progress down the road. These surveys were carried out in accordance with the business philosophies of W. Edwards Deming.

The industry was making progress

By the time a second audit was conducted in 1999, the beef sector had made significant strides in reducing condemnations, the number of disabled cattle, bruising, damage caused by branding, injection-site lesions, and improving the overall condition of cattle. But the industry was not finished.

At the same time, that audit identified four directives for further improvement:

1. Recognizing and optimizing the value of market cows and bulls.

2. Being proactive to ensure product safety and integrity.

The just-completed fourth edition of the Market Cow and Bull Beef Quality Audit assessed progress in managing these issues and suggested improvements for further enhancing the value and marketability of cows and bulls. The 2016 audit was broken down into several components:

Face-to-face interviews took place with 194 representatives from the supply chain to help define product attributes, the relative importance of these attributes, what factors are important to beef buyers, the image of the industry, and the strengths and weaknesses of the cow and bull market.

Over time, food safety, as a quality attribute, has become the most important factor to beef buyers. In contrast to the fed cattle beef supply, the composition of carcasses, as measured by yield, is the second-most important attribute to most buyers in the beef chain.

However, it became apparent in 2016 that fewer beef buyers actually understand the types of cattle from which their products are being sourced, particularly at retail segments of the beef chain. The beef industry needs to do a better job of helping beef buyers understand the products they’re purchasing. Buyers were generally better prepared to pay more for desired quality attributes, but compared to previous audits, were not prepared to pay as much of a premium for those traits as in the past.

The industry’s image varies significantly, with an equal number of packers seeing it as negative as those who see it as positive. Half of retailers and more than half of the government and trade organization representatives saw the image of the industry as positive.

Economics, quality, and value were considered strengths of the cow and bull industry, while weaknesses focused more on animal welfare aspects, with timeliness of marketing identified as a key production shortcoming by beef packers. Food service, government, and trade organization personnel, as well as further processors, cited animal welfare as a primary weakness of the market cow and bull sector.

Transportation and cattle mobility. For all cattle types . . . beef cows and bulls, and dairy cows and bulls . . . most cattle walked normally with no apparent lameness. This compared favorably with results from previous cow and bull audits. Since 2007, there has been an impressive 24.6 percentage point improvement in prevalence of sound dairy cows. Despite this positive finding, it’s important that producers be mindful to cull cows before lameness is observed whenever possible.

Of the cattle carcasses surveyed, nearly 98 percent had no visible knots or swellings resulting from an injection of animal health products. Furthermore, of the knots visible, about 45 percent were observed in the neck, which is the region in which injections should be administered in accordance with Beef Quality Assurance (BQA) guidelines.

Reduced numbers of injection site lesions through the years is one of the industry’s true success stories. We recently conducted additional research to determine the presence of injection site lesions in the round (hind leg) based on a procedure used in previous injection-site audits. That fact-finding mission demonstrated a 20 percentage point reduction in lesions during the past 15 years in dairy-type carcasses.

Harvest floor assessments: Hide-on. Holstein was the overwhelmingly predominant hide color and pattern for dairy cows and bulls. In other findings, the percentage of cattle without mud on the hide in 2016 (56 percent) was noticeably higher than in 2007 (42.7 percent). This suggests that there has been an industry effort to remove mud from hides before dressing. Packing facilities have comprehensive and costly interventions for removing mud from animals. Still, presence of mud at any level could pose potential contamination and should be minimized.

Harvest floor assessments: Hide-off. Although more than half of cow carcasses surveyed were bruised — an uptick from 2007 — the majority of bruises were of minimal severity (less than 1 pound of surface trim to remove bruise damage). Most of the bruises in cows were located in the round or sirloin. There is still opportunity for improvement in reducing total prevalence of carcass bruising, particularly in dairy cows.

Cooler assessments. There was more fat thickness in dairy bull carcasses as a group, but a reduction in the average fat thickness in dairy cow carcasses since 2007. The research also found that there was very little incidence of arthritic joints. Nearly 99 percent of carcasses were free of arthritic joints, a nearly 5 percent improvement since 2007 and an important step toward better carcass value.

During a strategy session featuring 70 individuals representing every sector of the beef industry, factors affecting the cow and bull beef market were discussed. This included the need for timeliness in marketing of animals; appropriate placement and size of brands; appropriate injection sites; more effective communication about animals not fit for transport; and remaining diligent in educating on BQA principles.

There are dollars being left on the table when it comes to maximizing the carcass value. The team calculated lost opportunities for each audit to give perspective to the value of quality defects identified during in-plant assessments. We found that there has been a large rise in lost opportunities from 1999 to 2016 — the biggest driver of which is the enhanced value for virtually all products, including by-products, associated with cows and bulls. Plus there has been a greater number of condemnations of several variety meats — particularly livers.

Where we go from here?
There is ample evidence to suggest that there have been improvements since 2007. That includes a significant improvement in the quality of carcasses from dairy cows. Progress can continue, however, by focusing on:
Related

Some soybean meal may under deliver on protein
Features
Related to:
features, beef
In Features