One reason for high hay prices out West 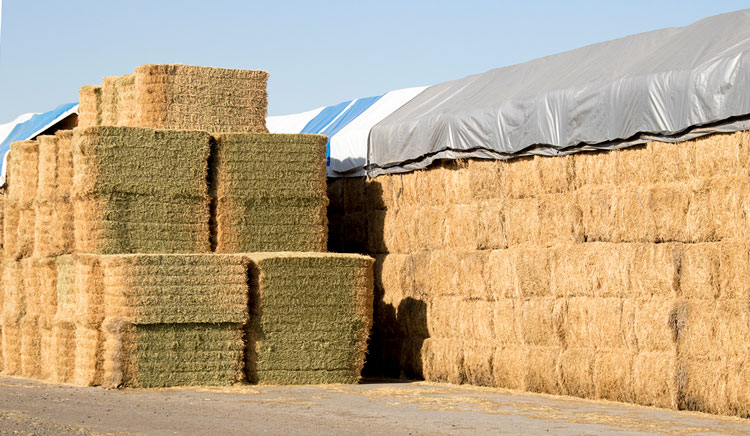 The West may be alfalfa country, but proximity doesn’t mean lower prices for its hay-buying dairies.

About one-fifth of all alfalfa hay grown in the U.S. comes from the 11 Western states. And yet, hay prices there tend to be among the highest in the nation.

Global demand and coastal shipping outlets – plus one particularly deep pocket – create strong price competition for Western milk producers. The result is a market where distant buyers are willing and able to pay what it takes to get alfalfa hay for their cows and local buyers feel the price effects.

Hay industry experts at the University of California-Davis estimate that 85 to 95 percent of all alfalfa grown in the West is consumed some distance away, compared to just 5 to 20 percent in the eastern U.S. In the West’s case, “some distance away” can mean literally anywhere in the world.

Korea is also a million tons-plus buyer that is growing steadily. A five-year phase-out of import duties on alfalfa and other forage crops was completed in 2017 under the Korean Free Trade Agreement, so 2018 will see a whole new price environment for exports there.

No water for alfalfa
One of the fast-growing buyers of U.S. alfalfa hay is the deep pockets buyer mentioned earlier – Saudi Arabia. That nation banned domestic use of water for growing wheat starting in 2017, and the ban will be extended to alfalfa in 2018. As a result, U.S. alfalfa hay exports to Saudi Arabia have more than quadrupled since 2015.

Alan Hallman, USDA’s Foreign Agricultural Service representative in Riyadh, says Saudi Arabia’s appetite for alfalfa is backed up with a willingness to essentially convert its oil dollars into food – in this case dairy products. Hallman says the monarchy pays subsidies to help bring various imports into the country, including a $59 per ton subsidy for alfalfa hay.
To comment, email your remarks to intel@hoards.com.
(c) Hoard's Dairyman Intel 2017
December 18, 2017
Subscribe to Hoard's Dairyman Intel by clicking the button below
Related