She exceeded all expectations

Selz-Pralle Dairy credited hard work and a little luck for breeding a cow that broke the national record for milk production.

The author grew up on a registered Jersey dairy farm in Gays Mills, Wis., and has been a multimedia journalist on radio and television. 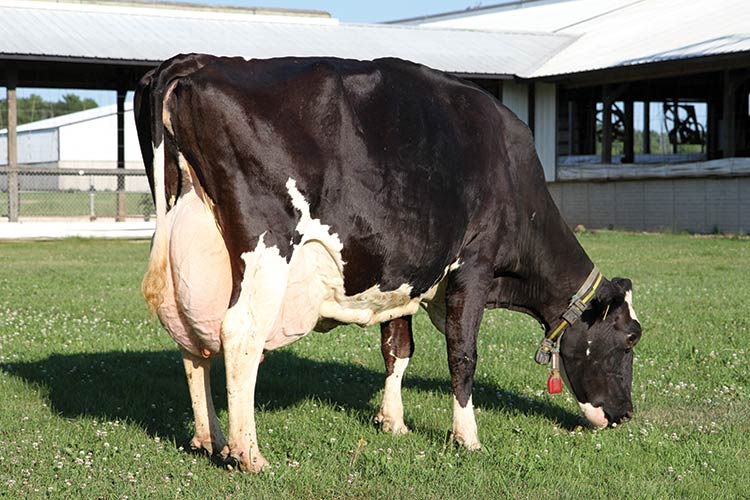 Milking 425 registered Holsteins on their century farm, the Pralles always had a high-performing team. With several cows producing more than 200 pounds of milk daily, 3918 never received any special treatment until Scott noticed her numbers were off the charts while preparing a presentation for SCR monitoring systems.

“We happened to look her up because her rumination was quite high at 600 minutes a day,” Scott said. “Our herd average is about eight and a half hours or 510 minutes. Then, I saw she was producing 270 pounds of milk a day.”

While Pam credits their herd’s success to a lot of hard work and a little luck, they implemented many important strategies for maintaining high-producing cattle like 3918.

Since calving for the first time at 1 year, 11 months, 3918 has never been treated for any health disorders beyond receiving vaccinations.

“She performs the best when we just let her do her thing in the group,” Scott said. “I wish they were all that way.”

While not all cows can go five years without a hiccup, the Pralles said cow comfort has been huge for preventing health concerns.

“We don’t have a lot of brand-new facilities,” Pam said. “What we do have is a staff committed to doing the right protocols every day.”

In their 20-year-old freestall barn, they use natural ventilation and fans to keep fresh air flowing. Mangers and stalls are cleaned multiple times a day, and sanitation is strongly enforced in the milking parlor. In fact, within the past year, they treated just 25 cows for mastitis.

“We don’t push our cows,” Pam said. “We look at low somatic cell count as a preventative for a stronger immune system. Even if we don’t get paid much for it anymore, it makes a healthier cow.”

Those cow comfort practices directly affected their bottom line by improving milk production since cattle could easily access feed, according to Pam. All cows in the herd have ample bunk space with no overstocking, and they trim cows’ feet twice during their lactation for improved mobility. 3918 served as a perfect example of how the ability to eat pushes production.

“She’s not a frail cow,” Pam said. “She has a lot of dairy strength with a strong front end and good feet and legs to get to the feedbunk.”

Selz-Pralle Dairy’s ration is balanced for 105 pounds of milk, yet their herd average is 107 pounds of fat-corrected milk a day. They feed up to 16.8 percent crude protein and put heavy emphasis on digestible feed.

Selz-Pralle started processing BMR corn silage as shredlage four years ago. Since the cows could better digest shredlage, 2 pounds of straw per cow was removed from the diet. Selz-Pralle Dairy also switched from soybean meal to canola, which improved their components in the milk. Another positive step has been utilizing bergafat from palm trees, an ingredient that is not commonly accessible for dairy producers.

“It just so happened that people we work with had it available for us, and that has worked quite well,” Scott said.

“She finished her lactation with the last three tests at 5 percent butterfat with over 200 pounds of milk a day,” Pam said. “That is something we couldn’t predict.”

Keeping a herd of 425 cows healthy requires attentive care and advanced technology. Their drive to be progressive dairy farmers was part of the reason why Selz-Pralle Dairy installed SCR monitoring nearly five years ago.

“The rumination system has been a game-changer for us,” Scott said. “It helps a good cow man or woman detect and stave off what could be a real problem in the herd.”

The Pralles said SCR technology helped them eliminate stressor events and catch problems 24 to 48 hours before cows showed physical signs of stress. The system has paid for itself in reduced veterinary costs. With nearly 500 cows calving last year, Scott said they had just two cases of displaced abomasums.

“When you consider the cost of DA surgery and the number of days milk stays out of the tank, those costs add up,” Scott said.

Give all cows a chance 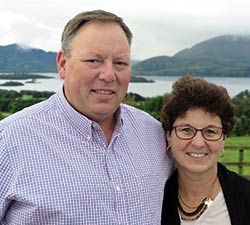 Pam and Scott Pralle (inset) milk 425 registered Holsteins on their century farm in Humbird, Wis
The Pralles recognized genomic testing could be an important tool for managing the bottom 10 to 25 percent of the dairy herd. While they test some cow families to check parent averages, Scott’s philosophy is to let every heifer have a first calf regardless of genetic merit.

“Once they prove themselves, they will either become a recipient in the herd or we will breed them to raise their genomic merit,” Scott said.

Scott’s theory proved profitable for 3918 who showed low genetic merit on paper. In the appropriate environment, she had the chance to fully express her genetic potential.

Calving for the fifth time in December, 3918’s previous daughters also showed their “athleticism.” The 3-year-old is expected to make more than 40,000 pounds in her current lactation. The other is a first-calf heifer that may hit 30,000 pounds. Meanwhile, 3918 is quickly moving back to her 200 pounds of milk per day record averaging 188 pounds within three weeks of calving.

Even after breaking the national record for milk production, Selz-Pralle Dairy is always looking to improve. Scott said one goal is to consistently produce 110 pounds of milk while boosting component levels. Pam said their objectives also incorporate consumer education.

“We need to promote cows like 3918,” Pam said. “Consumers think to get a cow that is an extreme producer there has to be some manipulation, cheating, antibiotics, hormones, or something else going on. 3918 did not need any performance-enhancing substances. She is simply an honest athlete.”

Scott and Pam challenged dairy producers to connect with consumers and share positive stories in agriculture. They said 3918 represents all dairymen as publicity of her production spreads across the globe. “We happen to have her in our barn, but she represents how hard we all work to provide a good environment for our cattle and produce healthy milk economically for everybody,” Pam said.