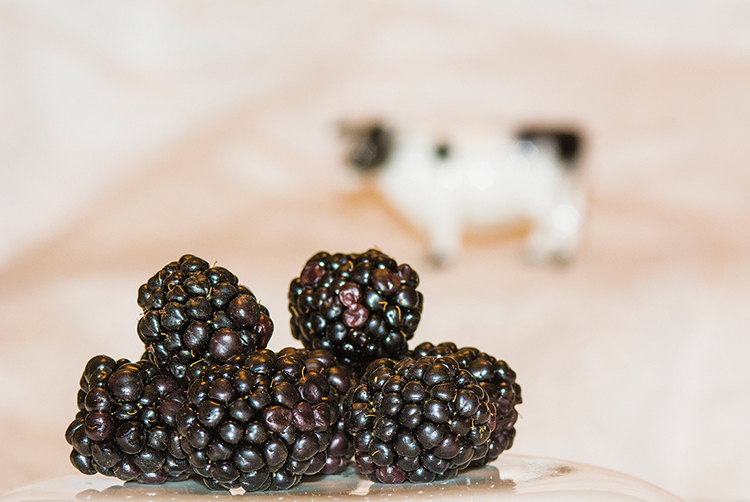 Is there something in blackberries that really improves the reproductive performance of dairy cows?

Scientists have long known that blackberries are loaded with antioxidants and vitamins (A, C, E, K, and the B varieties), and there is growing evidence they are among the most potent of all cancer-fighting fruits.

Oregon grows about 70 percent of all blackberries in the U.S. After the mashing process, processors typically have to pay landfill disposal fees for the mountains of pomace (waste) that is left. OSU Ph.D. student Katherine Swanson, whose Masters work looked at the role of fat-soluble vitamins as antioxidants in the immune system, thought blackberry pomace might have a positive impact on cows’ immune function — and so a feeding trial was born.

“The study was supposed to help improve immune function during the transition period, but we didn’t see any differences at all,” she explains. All cows performed as expected; there was no change in milk production, components, glucose, blood urea nitrogen, or B-hydroxybutyrate. Disease incidence postpartum was also pretty well spread out between the three groups; just one cow out of all 24 in the study had metritis.

But what Swanson did see were big improvements in cows’ reproductive performance.

On average, animals in the high feeding group (two ounces of blackberry pomace per head per day) had first heats 12 days sooner than the controls (no pomace), were bred 15 days earlier, and were pregnant 49 days sooner.

She suspects that antioxidants are the reason why. She graduates in June, but hopes someone will do another feeding study using much higher levels of pomace – 12 to 16 ounces per head per day.

Swanson has also been talking to students in Idaho about their work with grape pomace, “because to my knowledge no one has looked at using it in dairy cows specifically looking at reproductive performance. I think that would be really interesting, especially since the wine industry is so much bigger.”