By Kendra Martin
The author is the digital media and outreach coordinator with AgrAbility PA. 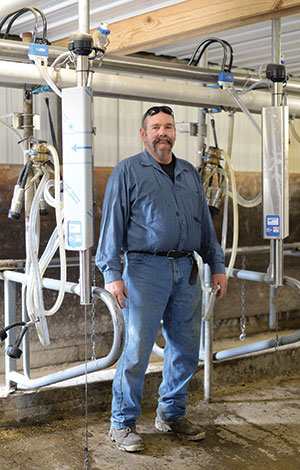 Philip Dean is dealing with several health issues, but modifications to his milking routine allow him to continue farming with less pain.

The year was 1840: Martin Van Buren was president of the United States of America, Antarctica was discovered as a continent, and Philip Dean’s great-great-grandparents started a dairy farm in Lawrence County, Pa.

It may seem like a long time ago — and it was. But Philip thinks back to that year with a sense of pride and strong family tradition.

“Farming is just a way of life for the Deans. We’ve been farming the same land for all of these years, it’d be a shame to see that change,” he explained.

Philip began farming the 200-acre land full time with his father in 1982. He was in his 20s — and his dad was having heart problems and needed more help. Seven years later, Philip and his wife, Cindy, purchased the farm and have been living and working as full-time dairy farmers since. In addition to helping around the barn, Cindy handles the bookkeeping for Dean Farms.

But working in a dairy barn for more than 35 years has a way of taking a toll on one’s body. A few years ago, Philip began to struggle with severe arthritis, shoulder pain, foot problems including hammer toe, and nodules in his lungs that caused pain when breathing in extreme temperature changes. He has also had two knee surgeries over the years.

While talking with a friend at church one Sunday, she recommended that Philip contact AgrAbility PA. The woman was familiar with AgrAbility’s services, as she had worked for the Pennsylvania Office of Vocational Rehabilitation (OVR), which is part of the state’s Department of Labor and Industry. Both AgrAbility PA and OVR work collaboratively throughout the state to help farmers with a disability or health condition continue working in production agriculture.

Not long after that conversation, AgrAbility PA Project Assistant Abbie Spackman met Philip at his farm to conduct a farm evaluation and assessment. An occupational therapist and a farm coordinator from OVR also met with him. The team explored and discussed what types of assistive technology equipment and modifications could be made to his milking process. This consultation and development of formal recommendations are a free service to farmers in the state.

During the farm evaluation, they talked about different types of assistive technology that could help him keep farming. They identified the milking routine as one of the most important tasks to modify.

Recommendations in his flat barn milking parlor included covering the gutters with grates and installing automatic takeoffs for milking. Automatic takeoffs release the milking unit from the udder of the cow when milking is complete. The unit is pulled up and away from the cow, greatly reducing repetitive motions. Thanks to funding support from OVR, these pieces are now in place and Philip can milk 10 cows at once — saving him time, as well as wear and tear on his body.

Other recommendations funded by OVR included a skid steer access platform and a utility vehicle. Philip uses the platform to enter and exit his skid steer safely without the need to climb and step on the front of the machine. It also has served as low scaffolding for doing jobs that require a lift around the farm.

The utility vehicle enables Philip to keep up with the logistics of moving cows from paddock to paddock, and also to pasture. The Deans use intensive rotational grazing. Philip has noticed a significant improvement in the grasses in the last 20 years. “And the cows seem happier, too,” he added. They also take cows outside to the pasture during summertime to calve.

Philip is fortunate to have his grown son, Adam — a fifth generation Dean — involved on the farm and in its ownership. Adam has added a cheesemaking operation to the farm and sells the product in Pittsburgh-area farmers markets.

The joke among the family is that when Adam began working on the farm following high school, Cindy said, “I’m retiring!” Retirement isn’t in Philip’s vocabulary yet, but the couple recently took a long overdue trip to Kentucky for a few days to celebrate their anniversary. It was the first time in 30 years that they had left the farm for more than two nights.

Philip is very grateful for the equipment and modifications that have allowed him to continue milking and working day in and day out around the farm. He describes AgrAbility PA and the OVR staff as the “push to make a lot of this a reality.”

Philip said, “It is great to have people come to the farm and see what we do. I only hope they know how much their support and generosity has meant to me and my family. It has meant everything.”

Assistive technology: In and around the dairy barn

Each year, AgrAbility PA works with dairy farmers throughout the state to make recommendations on assistive technology devices that are available to help in and around the dairy barn. Some of these options include:

Rail system: This system acts as a carrier for the milking units in a tie stall barn and allows for the use of automatic takeoffs. With this system, the farmer does not have to carry or lift the milking units. Rather, they run on an overhead track from the milk house to the stalls where the cows are milked. The units can be easily attached to the milk pipeline and to the cow while the weight is still held by the rail. This system reduces the wear and tear on a farmer’s back and shoulders.

Milk taxi: A piece of assistive technology to help feed calves is a milk taxi, calf mobile, or milk shuttle. Options for these devices range from small and simple to large and complex. Although there are many makes and models, the general concept includes an insulated or heated milk storage tank on wheels with an easy dispensing system. This tool can easily transport milk from the milk house to the calves. It eliminates lifting or carrying heavy buckets and saves time by reducing the number of trips back and forth. Devices with a heating option can keep milk warm for longer periods, allowing a farmer to work at a slower pace if needed. Most of these tools are also designed with self-cleaning or easy-to-clean setups.

Farmers often hesitate at the thought of changing the way they have milked their whole life, and the logistics and finances can also cause some stress. However, many AgrAbility PA clients who modify their milking routine share that they wish they would not have waited so long before making the change. These modifications truly make a significant difference in a farmer’s day-to-day routine around the barn.

Lessons to learn from avian influenza
Features
Related to:
features, farmlife
In Features