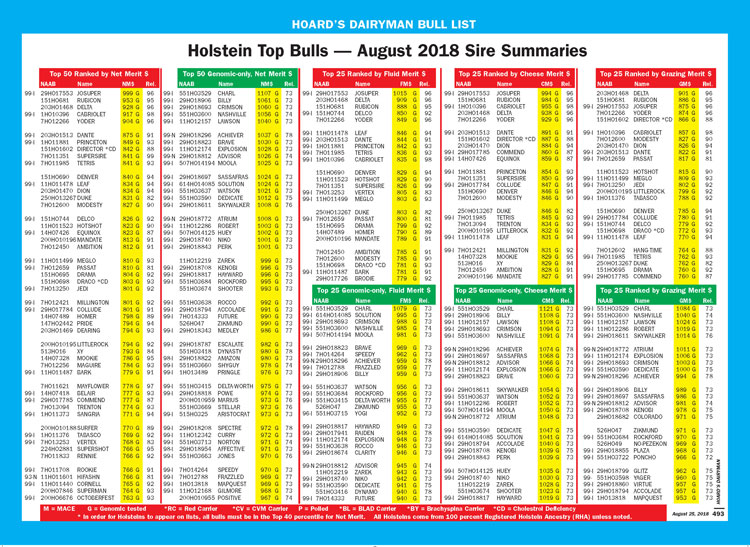 While the Hoard’s Dairyman Bull List will be available in the August 25 issue, we are making it available to readers here as well. It can be downloaded by clicking this link.

To make heads or tails of all those bulls, we sorted through the top bulls and ranked them on nine different traits or indexes in the Holstein breed. In Jerseys, we ranked bulls on two traits; and all other breeds on one trait.

Net Merit has a new look

This is the third change to the Net Merit formula this decade. From 2000 to 2010, there were four other changes to the formula. Here is a recap over time:

2010: Changed the formula weights in Net Merit to coincide with a genetic base change.

There were 4,165 bulls declared active by A.I. marketing organizations. That was up 325 bulls from August 2017. Overall, there were 1,107 bulls available that also have milking daughters. In a previous generation, these were called daughter-proven bulls. This group lost further clout dropping by roughly 50 bulls over the past year.

When everything is considered, genomics garners the largest portion of the bull rankings. The ratio of genomic bulls declared active climbed to 73.4 percent — that’s a new watermark. That tops the previous record from August 2017 evaluations . . . a pinnacle of 72.5 percent.

How quick do the top 50 and 25 lists change with each genetic evaluation?

These examples bring clarity to that question: