By Evan Van Beek
The author was born and raised on his parents’ almond and walnut farm in Tulare, where he was active in FFA, 4-H, and Farm Bureau. He will be a senior at Cal Poly San Luis Obispo this fall. His grandfather relocated his dairy from southern California to Tulare County in 1972, and three of his sons currently operate their own dairies in the county. Evan’s mother’s family has farmed in the area for 120 years. 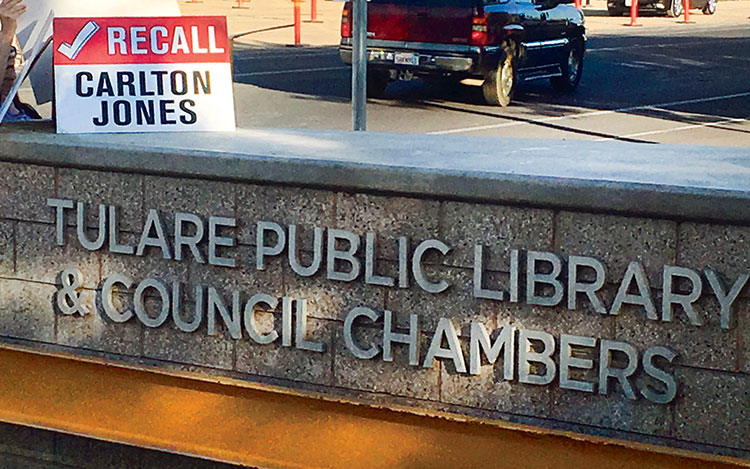 In 2016, its total gross agricultural production value was a staggering $6.3 billion. It is by far the biggest dairy county in California and in the nation, and it exports its products to 75 countries.

Agriculture is the largest private employer in the county, accounting for nearly a quarter of all jobs, and six of the county’s top 15 employers are food handling and processing firms. It is also home to the largest farm equipment show in the world.

Combine those details with the fact that Tulare County and the surrounding areas have been heavily farmed since they were settled, and many of the farms are family operations that have been passed down for generations, and it is not hard to see why its residents have such an emotional connection to agriculture.

So when Tulare Mayor Carlton Jones made disparaging remarks about agriculture and its effects on the land and environment this spring, it should come as no surprise that many of his constituents reacted very negatively.

The conversation that led to Mayor Jones getting embroiled in this situation took place May 18, in a Facebook argument about whether California’s agricultural industry was under attack or being obliterated.

The back-and-forth conversation is far too long to include in this article, but it can be seen in its entirety at http://gvwire.com/2018/05/22/carlton-jones-facebook-thread/. It helps put his more inflammatory comments into better context.

The short summary is that Jones took the side it is not, while those he argued with took the side that it is under attack. The conversation eventually became less civil, which is when Jones made the comment that drew the ire of so many:

“You’re having a conversation with someone in your head. Ag strips the natural resources and contaminates our ground water and air. Ag causes asthma and valley fever, cancer and kills bees. You can’t educate me. You’re trained. You can share with me what you’ve (been) trained to think. We can debate the difference between what you think and what I think.”

A screen shot of the comment was quickly shared on the “My Job Depends on Ag” Facebook page, which boasts over 82,000 members. Once that happened, the outrage began.

Many people in the comment section began asking for his job, as did others who shared the post with their followers. The outrage was so loud that Jones ended up holding a Town Hall meeting a few days later where he offered an explanation/pseudo apology for his comments:

“There’s three things: there’s what was said; who was saying it; and the way it was said. I was totally wrong in the way I was saying it. I was totally wrong in having a chess match with another dude – I don’t even think we were focusing on the information, we were just taking shots at each other. And the goal was: oh, you took a shot at me, I took a shot at you. That was the context of that conversation. I think they were able to take a segment of that and make it sound like I was anti-agriculture. Now what was said is what I would love to get an understanding of here today. If I said something that anyone disagrees with, that’s what we can talk about and explain these concerns. Now, who was saying it. Some people have an issue with me saying those things. And that I’ll never apologize for.”

Many of those watching the town hall (whether by actually attending it or by streaming it online) just wanted to hear Jones apologize for what he said – which they didn’t get. Most had no interest in the reasoning for his post, and even after hearing it they didn’t think the explanation excused his comments. During the public comment section of the Town Hall meeting, many locals continued to reprimand the Mayor and ask for his job. Comment sections online contained much of the same.

The outrage continued at the subsequent City Council meeting on June 5. Many constituents of Mayor Jones who were involved in the agriculture industry showed up to once again hear what he had to say and to have their disgruntled voices heard. The saga finally ended on June 19 when Jones officially stepped down from his role as Mayor, but he stuck to his guns as he addressed the council as Mayor one last time:

(In regard to conversations he had with local farmers) “None of them, not one person, said we disagree with anything you said. We disagree with the way you delivered it. And I apologized for that. I apologize for allowing myself . . . to engage in an argument online. I’m not going to apologize for the things that I said.”

Even though Tulare was able to get a resolution to its mayoral issue, this story still has a number of issues that perhaps need to be dealt with going forward.

One, do we want our politicians to speak without a filter or not? For years, many have claimed to be frustrated with the fact that such a large percentage of politicians are far too calculated in the way they speak and that they present somewhat of a false veneer of themselves publicly. We clamor for them to speak more candidly and give a more accurate depiction of the beliefs they truly hold, yet when Mayor Jones did so he was attacked for it.

Do we want transparency?

It’s not a great look to ask for transparency with elected officials, then when one of them gives it to us they are ripped to shreds. Especially if we take Jones at his word that none of the farmers he talked to disagreed with what he said, just how he delivered it. Getting outraged because Jones delivered a message that he claims many in the industry agree with, yet was just delivered in a way that made many uncomfortable, can be seen by some as a somewhat hypocritical reaction.

Second, we need to decide if this is the precedent we want to set for how we deal with issues that stem from social media comments. I am very torn on this subject.

On one side I see why Jones should have to pay a price for what he said online. As the Mayor of Tulare, he was essentially the CEO and visual representation of our town and community. If that is the case, then you can’t have that person publicly disparaging their constituents’ number one industry. Not only is it a boneheaded thing to do, it is also extremely disrespectful to so many of those who helped put him in the position to represent them.

On the other side, I don’t love the idea of calling for a person’s head on a stake over social media mishaps. I think we have to realize that not only is social media here to stay, it is only going to get more prevalent going forward. As my generation (I am 22) starts to move into the workforce, we are going to find that almost all of our future elected officials, CEOs, farmers, you name it, will have a social media history. If we start eliminating potential candidates who have said or done dumb things online, then we are going to miss out on many very qualified individuals.

All that being said, at the end of the day Jones no longer being the Mayor of Tulare is probably for the best. This was just one of the litany of issues the town had with him. I actually think that had this issue happened in a vacuum, it would not have resulted with Jones losing his title. In this instance, his controversial comments just happened to be the straw that broke the camel’s back.

I think the moral of the story here is that if you’re going to be a controversial elected official, you can’t get caught bashing your town’s main industry online. And on the off chance that you do, you’d better have a really strong apology.

The randomness of reproduction
Reproduction E-Source
Related to:
features, consumers
In Features