For these Expo exhibitors, dreams came true when their bred-and-owned cattle became champions.

The author and her husband work in partnership with family on a 100-cow dairy in St. Charles, Ill. 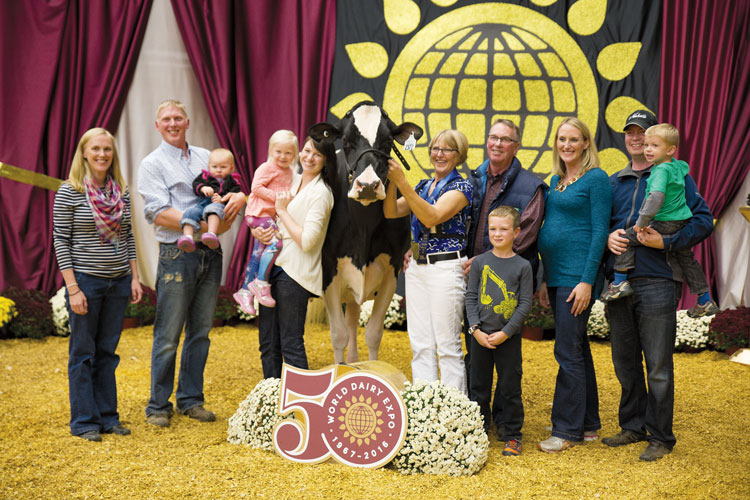 For the Sheehan family, the opportunity to watch their homebred cow walk the colored shavings became much more special when Thomas was named Grand Champion of the International Holstein Show in 2016.

Many people dream of exhibiting a Grand Champion animal at World Dairy Expo. Perhaps more dream of breeding such an animal. A rare few have had the opportunity to claim the title of Grand Champion with a homebred cow.

This spring, the industry lost two such animals — Indian Acres MM Pistachio Pie and Sheeknoll Durham Arrow. Although the two cows represented different breeds and hailed from different regions of the United States, they shared a unique commonality. Both had walked the colored shavings with their breeder on the halter, topped their class, and went on to be named Grand Champion of a breed show at World Dairy Expo.

It’s a feat that has only been achieved by a handful of cows throughout the 51-year history of the show. Their respective breeders, Ashley Sears Randle and Bob and Jeannette Sheehan, agree being named Grand Champion with a homebred animal is a humbling honor.

“It’s the Guernsey!” — the infamous phrase that told 2007 World Dairy Expo Supreme Champion ceremony attendees that Indian Acres MM Pistachio Pie had just made history. Not only was Pistachio Pie the only cow to win the Supreme Champion title in both the open and junior shows in the same year, but this cow did so with its breeder, Ashley Sears Randle, on the halter.

“When my mom gets an idea in her head, nothing stops her,” explained Randle. “As soon as she saw Pecan Pie, she knew she wanted to purchase and work with the cow. Pecan Pie was a deep red-colored Guernsey and stood out because of her exceptional strength and mammary system. My mom had the vision for what the family could develop into for us.”

Pecan Pie traveled later that fall to World Dairy Expo as a junior 3-year-old where the cow was named Reserve Intermediate and Honorable Mention Grand Champion. This cow wasn’t purchased with just the colored shavings in mind, though.

For the Sears family, it was more than going out and looking to buy the next great one. They viewed the purchase as an investment in genetics and a good cow family to breed from. “We were striving to make calculated, careful breeding decisions to make Guernsey cows with good udders and strength that would translate to longevity,” shared Randle.

Despite the Sears’ herd being comprised of mainly Holsteins, Randle shared an interest with her mom in the Guernsey breed. So, when Pecan Pie had a calf, Indian Acres Fays Pumpkin Pie, she became Randle’s 4-H project calf to work with and develop. Randle showed Pumpkin Pie at several national shows and had two daughters sired by Four Winds Magicman-ET — Peach Pie and Pistachio Pie.

Randle credits her parents with instilling the importance of having a vision and patience in a breeding program. “Pumpkin Pie had great style and strength from Pecan Pie. My mom and dad encouraged me to mate Pumpkin Pie to Magicman because of everything we had seen and read regarding the phenomenal udders the sire was transmitting to his daughters,” explained Randle. 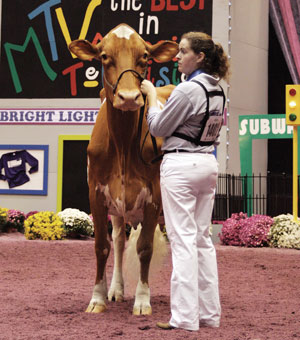 For Ashley Sears Randle, her homebred Grand Champion — Pistachio Pie — saw her through so much more than the 2007 banner moment.

Pistachio Pie needed time to develop as a heifer and a young cow, related Randle. Pistachio Pie was finally showring ready as a 4-year-old. She was named Grand Champion at the All-American Dairy Show in Harrisburg and the North American International Livestock Exposition in Louisville. The following year, Pistachio Pie was named Supreme Champion of the junior and open shows at both the All-American Dairy Show in Harrisburg and World Dairy Expo.

Randle described the experience as a whirlwind. “I had just started my freshman year of college at Cornell University,” she said. “In the weeks between Pistachio Pie’s win at Harrisburg and World Dairy Expo, it was pretty hard to focus on classes.”

Today, Pistachio Pie’s legacy continues through both the maternal and paternal side of Guernsey pedigrees.

“Eleven years later, it’s very humbling to see the impact she has had on the breed through her descendants. She’s been a great foundation cow for us and others,” said Randle.

Indian Acres has a number of Pistachio Pie family members including great-great-granddaughters. Randle described the group as strong individuals that stand on a good set of feet and legs with a strong fore udder and wide rear udder.

“They also tend to have a determined, spunky personality like the rest of the Pie family,” she added. The group has proven successful in the showring and in the barn, accumulating show winnings and All-American nominations and topping Cow Performance Index (CPI) lists. In fact, Pistachio Pie’s daughters average a classification score of VG-89 and have records up to 30,000 pounds of milk and 1,700 pounds of fat.

“After winning the ultimate accolade with Pistachio Pie at World Dairy Expo, I wondered what would be the next goal for our breeding program? Then, we began seeing the impact that her sons, including American Pie, were having in the showring. It was exciting to hear American Pie announced as Premier Sire in 2016 and 2017,” said Randle.

Pistachio Pie passed this spring right before her 16th birthday. “Pistachio Pie saw me through high school, college, law school, and my wedding day. This cow may have crossed the rainbow bridge, but she will always be a part of my family through her descendants,” shared Randle. Pistachio Pie is still at Indian Acres buried under the apple tree on the farm — her favorite spot.

For the Sheehan family, each breeding at Sheeknoll Farms, a 300-cow herd located near Rochester, Minn., is viewed as an opportunity to make the next generation better. “We don’t breed cows to win on the colored shavings,” said Bob Sheehan. “We strive to make cows that exhibit good type traits coupled with good milk production.”

As a calf, Sheeknoll Durham Arrow was renamed “Thomas” by Sheehan’s nephew, and the nickname stuck. “While our nephew chose the name because he liked trains, it was also quite fitting as Thomas was a ‘tank engine’ kind of a cow,” shared Sheehan. Thomas’ family represented six generations of Sheeknoll breeding. Sheehan describes the family as good, honest cows.

“They were medium-sized, with good feet and legs and excellent udders. The family excelled in longevity and high lifetime production,” he continued.

Thomas is sired by Regancrest Elton Durham-ET. Sheehan had used the bull since it was first released and liked how the calves in his herd developed. He recalled, “When I bred Thomas’ dam, Sheeknoll Pronto Venture, Durham was considered old genetics.” In fact, when Thomas was born in 2010, Jeannette was surprised to learn the calf was sired by Durham and asked Bob why he had still been using the bull.

Early on, Thomas didn’t stand out, according to Sheehan. This cow’s showring potential was overshadowed by another homebred cow — Sheeknoll Bolton Ariana. Ariana was a similar age to Thomas and had attracted the attention of the Sheehan family and others as the animal had done well in the showring as a summer yearling.

Thomas calved right at 24 months. “We decided to show her at our state Holstein show as a junior 2-year-old, but Thomas needed more time to develop,” Sheehan explained. “We admired Thomas’ feet and legs, udder and potential to be a great cow in our herd.” Thomas would go on to breed back and have a calf every April — five calves total by the time Thomas reached her sixth birthday.

In 2016, the Sheehan family took Thomas to their state Holstein show and state fair to show as an aged cow. Thomas won Grand Champion at both shows, and the family began getting asked if this cow would also make the trip to Madison, Wis., to show at World Dairy Expo. “Following Thomas’ win at state fair, we decided we would enter her and begin preparing her to make the trip. If Thomas looked good-to-go, we would take her,” said Sheehan.

For Thomas and the Sheehan family, everything seemed to fall into place. “The cow did her part, and we did ours. It was just her day,” he said. Sheeknoll Durham Arrow was named Grand Champion of the 2016 International Holstein Show. For Regancrest Elton Durham-ET, after siring numerous class winners and being named premier sire for five consecutive years, Thomas would be the first Grand Champion win at World Dairy Expo for the bull.

Thomas’ win generated a lot of domestic and international interest in the cow’s genetics. Bob commented, “Because we admired Thomas as a profitable cow in our herd before World Dairy Expo, we had IVF’d her the previous year and had calves already available for sales. We sold one in the fall and a small group in the spring. We continued to IVF Thomas last year until she reached 100 days pregnant.” Thomas has calves by Dymentholm Mr Apples Avalanche, Maverick Crush, Mr Chassity Gold Chip-ET, and Pine-Tree Sid-ET.

Thomas calved with a sixth calf on her eighth birthday and then unfortunately passed away in May. Although she is gone, her legacy continues through the next generation. At a glance, Thomas’ genetics can be seen in the Sheeknoll herd through a similar head marking and spunky personality, according to Sheehan.

“Along with some calves still coming, we also have a group of daughters that will be calving soon,” said Sheehan. “We’re looking forward to seeing how the daughters emulate Thomas’ udder and milk production.”

Although she passed away in October 2017, Snickerdoodle’s influence stretches on. At the time of her death, she had offspring in 11 different countries, sons in A.I., and a multitude of ardent admirers. Her legacy is sure to live on in the Brown Swiss breed. 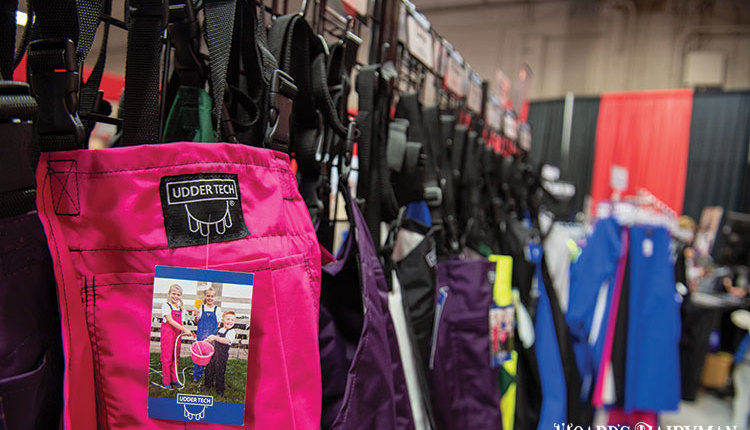 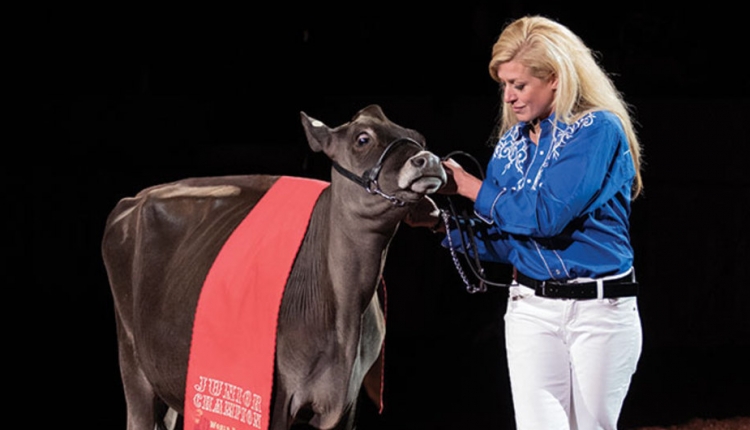