No more plastic covers and tires on this bunker

By Paul Queck
The author is a freelance writer in Indianapolis, Ind. He recently traveled to the Netherlands to interview dairy farmers and processors. 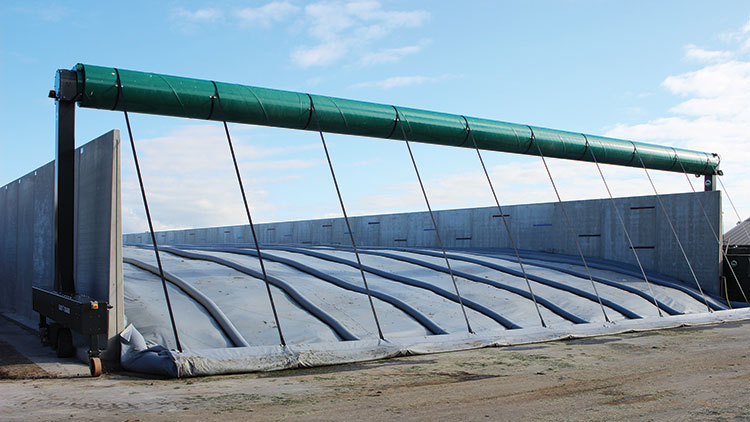 De Jong normally lays down six layers of grass silage (a layer per cutting) in his bunker silo. When packing is complete, he covers the silo. As the bunker cover is pulled into place, hoses on top of the cover, filled with saltwater, press the cover down on the silage.

Covering your bunker silos is one of the most unpleasant jobs on the farm. Plus, it takes a lot of labor. But that’s not the case on Jaap De Jong’s farm.

Jaap, along with his sister, Esther, and parents, Piet and Fetsje, run the family’s 430-cow dairy operation near Scharnegoutum in the Netherlands. Looking at the bigger picture, the farm is situated north of Amsterdam near the shores of the North Sea. The family’s Holstein herd averages 19,840 pounds of milk with 4.35 percent fat and 3.6 percent protein.

The automated silage covering system the De Jong family installed is what the company calls a “Portal System.” It uses a large roller to lay down the cover onto the silage and to pick it back up. The silage cover is reusable. The company reports covers still in use after 15 years. A cover costs about the same as 10-years worth of plastic covering.

The cover has a system of water-filled parallel hoses that lay on top of it from the back of the bunker to the front. These hoses press the cover down tightly onto the silage. There are 34 cubic meters of water pushing down on the cover, “That’s much more pressure than tires provided,” noted De Jong.

De Jong said the silage cover system for one bunker silo cost his dairy operation 75,000 euros (around $87,700 U.S. dollars). “I know it’s expensive,” he said, “but the quality of the silage is much better, we don’t have to buy plastic every year, and it saves labor.

“Before we installed this system, it took five workers to cover this pile,” said De Jong. “Now I can do it myself in a few minutes.”

Finding good help is a major concern for De Jong. Dairy labor in the Netherlands is in short supply. And when you find talent, it’s also expensive. Labor cost is a major driver pushing De Jong and other Dutch dairyman to low-labor systems.

De Jong cuts mostly grass silage, laying down a layer of silage in his bunker silo with each cutting. He normally harvests five to six cuttings each summer.

There are nutritional differences in each layer of silage, but by removing the silage from the end of the bunker, the mix of each layer is the same throughout. “Every day, the cows get the same feed, and for the cows, that’s good,” said De Jong.

He bought the silage cover from Easy Silage B.V. in Dearsum, Netherlands. At the moment, the firm does not sell in the United States.

Readers can learn more about this bunker covering system online at www.easysilage.com.

A reset on calving ease
Features
Related to:
features, silage
In Features

All bunched up
comments powered by Disqus