What could a new NAFTA mean for dairy?

The new trade deal between the United States, Mexico, and Canada advances dairy interests as farmers and the entire industry look for tariff relief and more trade agreements

Tom Vilsack, a former U.S. Agriculture Secretary, is the president and chief executive officer of the U.S. Dairy Export Council. Jim Mulhern is president and CEO of the National Milk Producers Federation.

Tom Vilsack
The U.S.-Mexico-Canada Agreement (USMCA) announced September 30 was achieved after months of hard-nosed negotiations. Now that the three countries have arrived at a verbal agreement, what does it mean for financially struggling U.S. dairy farmers who are eager for hopeful news?

We said Canada’s export pricing schemes, exorbitant tariffs, and nontariff policies run counter to the very idea of free trade and need to change. But our No. 1 message was “keep Mexico’s market open.” We sought to maintain our win-win relationship with the biggest dairy export market for American milk products.

What does that mean for our farmers?

It takes more than 1,500 American farms at the average annual production rate of 710,000 pounds of milk solids per farm to supply a year’s worth of exports to Mexico.

This new, trilateral trade agreement resolves concerns about the evaporation of NAFTA with nothing similar to replace it. The deal lifts a cloud of uncertainty adversely affecting U.S. dairy farmers and exporters. It preserves our strong, duty-free relationship with Mexico. 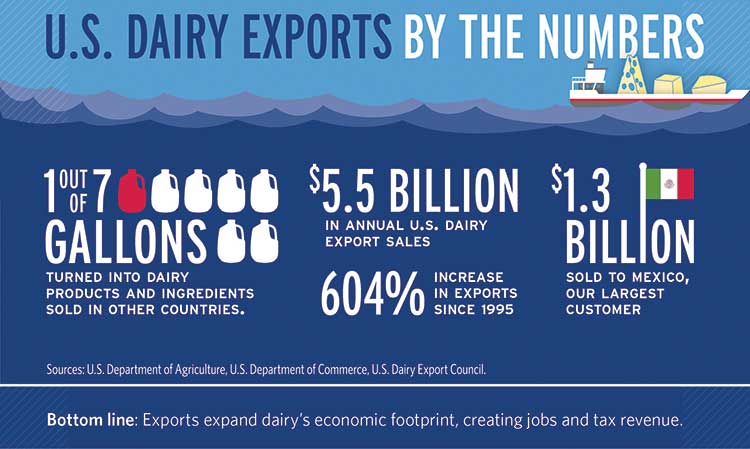 From a long-range, strategic standpoint, one of the greatest benefits of the new NAFTA, now known as USMCA, is it keeps the overall structure of the previous trade pact in place. That should mean more exports for our suppliers and more opportunities for U.S. dairy farmers to stay in business with hope for a better future.

This agreement, if properly implemented, should give incremental new marketing opportunities that will allow us to export more U.S. dairy products to Canada. It’s important to note, however, that Canada will remain a largely self-contained, protected milk market.

As always, the devil will be in the details. The dairy sector is still carefully analyzing those details and their potential impact, including the removal of Canada’s Class 7 milk pricing scheme, and what might replace it.

Yet, we believe that if implemented correctly by Canada, the elimination of Class 7 and the enhanced access to Canada will help some of our dairy farmers, especially in northern states and those owning cooperatives that produce powders.

In a joint news release with the International Dairy Foods Association (IDFA), our three organizations thanked President Trump and his administration for fighting for farmers and processors, as well as the nearly 3 million jobs our industry supports.

The text of the agreement was released on September 30. Trade Promotion Authority legislation laid out a time line for free trade agreement signings and approvals, stating that the president can sign as early as 60 days after the release of the text.

After that, how fast the deal will advance is unknown and could be influenced by several factors, including mid-term elections. While congressional consideration is possible during the lame duck session of Congress following the mid-terms, the more likely scenario is a vote in the spring of 2019.

USMCA is not a quick fix for dairy farmers economically hurt by low milk prices. But it appears to be a hopeful step in the right direction as our industry works on a long-term strategy to grow exports, especially to our No. 1 market, Mexico. We appreciate the hard work of Trump administration negotiators to get us where we are today.

The agreement on USMCA should free up the Trump administration to devote more time to repairing U.S. trade relations with China. That major trading partner has levied retaliatory tariffs on U.S. dairy exports, valued at $577 million last year. By approving USMCA, it also would free up precious time to pursue bilateral negotiations in earnest with high-potential markets like Japan and, post-Brexit, the United Kingdom.

Whatever happens, our organizations will represent the trade interests of the U.S. dairy industry with energetic vigilance.

The U.S.-Mexico-Canada Agreement (USMCA) announced September 30 will replace the North American Free Trade Agreement (NAFTA) while maintaining most of its structure. An analysis of the agreement’s text by the U.S. Dairy Export Council (USDEC) and National Milk Producers Federation (NMPF) shows that it:

Gives the U.S. more dairy market access to Canada. Volumes are slightly more than were agreed to under the now-defunct Trans-Pacific Partnership (TPP), but with USMCA, these volumes are solely for the United States rather than split between all TPP participants.

Establishes new ways to oppose GIs. The deal includes new disciplines to strengthen the ability of common-name users to oppose applications of geographical indications that would monopolize the use of generic terms. USMCA also establishes a nonexhaustive list of commonly used cheese names that may not be restricted by Mexico moving forward.

Provides sanitary and phytosanitary provisions. USMCA establishes rules that will provide for more transparency and more scientific grounding of countries’ regulations in ways that should help prevent nontariff barriers to trade.

What U.S. dairy still needs
Looking ahead, USDEC and NMPF will continue to make the following points on behalf of our industry: Mexican tariffs are still in place. A lot of hard work went into finalizing the agreement, but important work still remains. We will not see the benefits of USMCA until the administration rolls back metal tariffs on Mexico and Mexico ends its retaliatory tariffs on U.S. cheese exports. Tariffs are hurting farmers. Retaliatory tariffs by Mexico and China combined have already cost U.S. dairy farmers an estimated $1.5 billion this year with 2019 losses forecasted to exceed more than $3 billion, according to a recent Informa Agribusiness study. China and other countries need attention. We hope the agreement on USMCA frees up the Trump administration to devote more time to repairing U.S. trade relations with China, which has levied retaliatory tariffs on U.S. dairy exports valued at $577 million last year, and to pursue bilateral negotiations in earnest with high-potential markets like Japan and, post-Brexit, the U.K.
Related