Fluid milk is beyond the crisis point 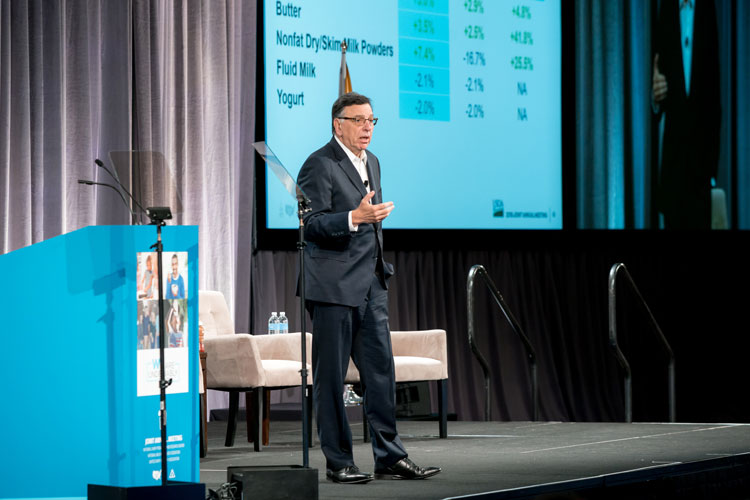 “Milk prices are top of mind for dairy producers,” said Marilyn Hershey, a Pennsylvania dairy woman who is chair of the Dairy Management Inc. board of directors. “In the same breath, dairy farmers want to see innovation,” she stated at the annual gathering of the National Dairy Promotion and Research Board and the United Dairy Industry Association held on October 31, 2018, in Phoenix, Ariz.

“It not only takes innovation for beverage milk, but investment in infrastructure,” added his wife and business partner, Sue McCloskey.

“Coca-Cola has 20, $1 billion brands, and fairlife will soon be the next,” predicted Mike Saint John, CEO for fairlife. And Saint John should know, as he was on the team that brought Coca-Cola’s Simply Orange to the marketplace. It is now one of those $1 billion brands.

When it comes to innovation, “fairlife has 13 times the protein found in almond juice or what marketers call almond milk,” said Saint John. In a good news story for dairy, Saint John added, “Fifty-five percent of fairlife sales have come from taking sales away from the plant-based juice, other juice and juice drinks, water, tea, and sports drinks.”

“I believe a rising tide will lift all boats. We need to promote milk,” said Saint John as to his reason for sharing this market insight with the audience. “Milk is the world’s original health drink.”

The pathway forward
“We have additional partners working on fluid milk in addition to fairlife,” Gallagher later commented. “They are working on lactose-free, chocolate milk, ingredient use, packaging, value-added, brand marketing, and infrastructure,” he said.

As for those partners, some of them include: Darigold, Dairy Farmers of America, Kroger, and Shamrock Farms. All those partnerships required a financial commitment along with an action plan to increase milk consumption, improve utilization, and innovation of fluid milk on a national scale.

Hit the road with this advice in mind
By Corey Geiger, Managing Editor