The frequency and cause of clinical mastitis may differ considerably between dairy herds. Therefore, descriptive results from epidemiological studies characterizing clinical mastitis can provide insight to control, treat, and prevent further cases.

Although several studies have reported the association between pathogen and actual clinical mastitis, few have prospectively monitored clinical mastitis on farms for an extended time. Quality Milk Production Services at Cornell University in New York offers a service where couriers pick up milk samples 360 days per year and return pathogen results the next day for mastitis management decisions, including treatment. This allows us to describe pathogen distribution and the true incidence risk of clinical mastitis.

One year of tracking

A mastitis case was considered new if there was at least 14 days between a previously diagnosed case and the current case in the same quarter. The same held true if a different pathogen was identified. The monthly incidence risk at the cow level within herds was calculated each month as the number of clinical mastitis cases divided by the number of cows at risk.

A total of 7,513 clinical cases were recorded during the year. The most common result was negative culture; this is likely due to the cow’s immune system affecting the bacteria’s ability to grow (killing it) such that there are no bacteria left in the milk sample at the time of clinical signs. The next most common result was environmental pathogens, especially coliforms (E. coli and Klebsiella spp.) and Streptococcus spp. In fact, Staphylococcus aureus was the only contagious pathogen isolated.

The most consistent finding among the eight individual farms was no growth that ranged from 20 percent to 40 percent of submitted samples for each farm. Gram-positive microorganisms caused a third of clinical cases among all farms (ranging from 17.1 to 37.1 percent); while gram-negative pathogens were identified in 26.3 percent of samples (ranging from 18.8 to 30.9 percent). All farms except one had at least a few cases of nonbacterial microorganisms such as yeast and/or Prototheca spp.

On Farms A, D, E, and G, E. coli was the most common pathogen isolated between 19 and 32 percent of the time. Klebsiella spp. showed a higher number of cases on Farms C and F (19 and 10 percent, respectively); while it was lowest on farm H (1 percent). Streptococcus uberis was an important pathogen on Farm C, F and H (34 percent, 21 percent and 16 percent, respectively) and the lowest on Farm A (1 percent). On Farm E, Staphylococcus aureus was the third most common cause of clinical mastitis with 10 percent of cases; whereas on Farm F and H, there were no cases due to this pathogen.

Over the study period, cow-level incidence risk for clinical mastitis was 4.8 percent, while the median was 5.1 percent. This means that out of 100 cows at risk for mastitis during each month, about five of them will experience a new case of clinical mastitis. As we look across these and other herds, this risk is unfortunately common.

More than 95 percent of cows with clinical mastitis during the study period had only one affected quarter at one time. No difference was observed in the distribution of clinical mastitis according to the quarter position: 49.7 percent of cases were identified in the front quarters while 50.3 percent affected rear quarters. Similarly, no differences were observed according to quarter sides: right hind was 25.8 percent; right front, 26.2 percent; left hind, 24.5 percent; and left front, 23.5 percent. 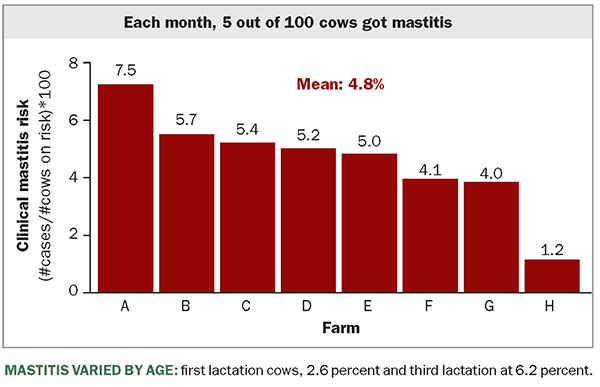 When timely and accurate pathogen identification is provided, more precise treatment protocols can be followed on-farm. This leads to more economical use of antibiotics and more saleable milk by not treating cases where there are no bacteria present at the time of clinical detection.

As farms do a better job identifying mastitis cases and performing better milking procedures, the frequency of cows affected with contagious pathogens has diminished. Conversely, environmental microorganisms have emerged as the current challenge of mastitis control.

Utopia does not exist

It is practically impossible to eradicate environmental pathogens from dairy herds, especially because they survive and multiply in extramammary reservoirs. This data highlights the fact that although farms may have similar clinical mastitis incidence risk, the pathogen distribution was different between farms, thus practices to control and treat these mastitis causing pathogens may differ between farms.

It’s all in the flow
By Valeria Alanis 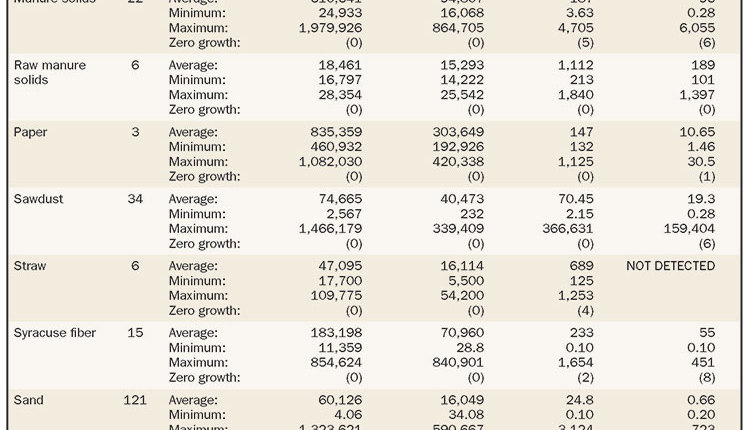