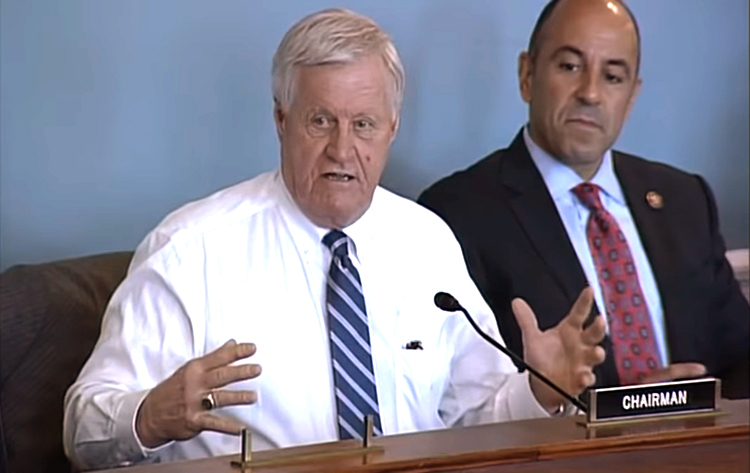 Sign-up for USDA’s new Dairy Margin Coverage (DMC) risk management program begins in less than a month (on June 17). House Ag Committee Chairman Collin Peterson (above in white shirt) has advice for producers who are trying to decide how much coverage to get and for how long.

During his introductory comments at a recent public hearing, “Reviewing the State of the Dairy Economy” in Washington, D.C., he said, “In my opinion, there is no question about what to do. It is very simple. Unless you are wealthy and have deep pockets, if you want to stay in the dairy business, you should take the $9.50. You should take it for five years and lock it in. And if you don't, don't come and complain to me.

“Hopefully, we won't have to use it. Hopefully, the market will be there, and we will not have to dip into this. But you know, for a relatively small amount of money, you can lock in a gross income for five years. It's probably not as much as people would like, but it’s enough to get you through some of these tough times.”

Premium cost is 15 cents per hundredweight at the maximum margin level of $9.50, which is pretty affordable. He’s also right about it being a no-brainer choice for small farms.

But low-priced DMC coverage is capped at 5 million pounds of annual production at all margin levels. If a farmer wants to protect more milk, the highest coverage option they have is $8 — and it costs 18.1 times more than it does to cover the first 5 million pounds ($1.813 per hundredweight versus 10 cents).

Larger farms have some other options
Farms producing over 5 million pounds of milk have additional options for milk price protection.

Federal officials took note of the dire situation when dairy farms became swamped in red ink. As a first step last summer, USDA approved Dairy Revenue Protection (Dairy-RP) insurance. That program operates much like crop insurance and it can even be a standalone risk management tool, or it can complement other risk management tools such as the farm bill’s Dairy Margin Coverage program.

As the farm bill was signed into law, Congress also pulled the restrictor plate off other dairy programs. Dairy farmers can now participate in multiple programs such as DMC and the Livestock Gross Margin-Dairy program, which is a benefit to larger dairy farmers exceeding the 5 million-pound mark. That dual participation wasn’t possible under previous federal rules. Again, this new provision is important given the annual 5 million-pound milk cap on the DMC program.

In addition to these options, dairy farmers producing over 5 million pounds of milk can consider the Dairy Forward Pricing Program (DFPP) and CME futures contracts.

Use IV calcium when it best helps the cow
By Dennis Halladay, Western Editor