Physically effective fiber should no longer be synonymous with long, indigestible, and sortable ration ingredients. 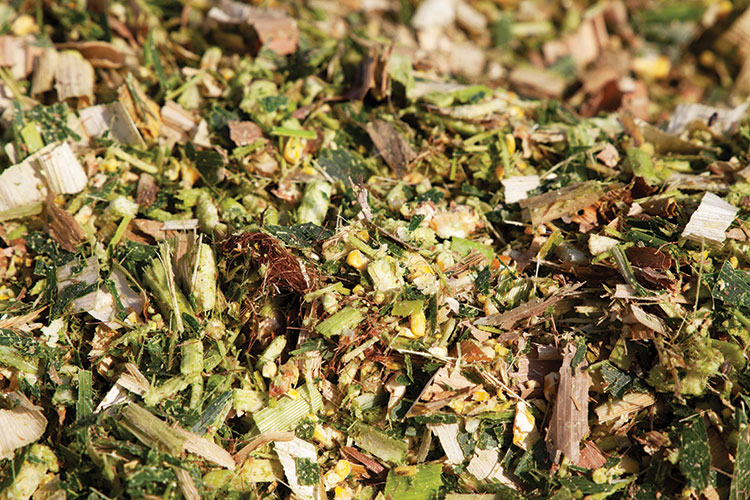 Take a look at long forage particles in your feed. They may be slowing your cows down at the feedbunk.

It is time to update our recommendations for optimal ration particle size. Physically effective neutral detergent fiber (peNDF) was defined by Dave Mertens in 1997 as the portion of forage or feed particles that are retained on the 1.18-mm (millimeter) screen during dry sieving multiplied by the NDF content. This proportion of fiber is effective at stimulating chewing and forming a functional rumen digesta mat.

More recently, the modified Penn State Particle Separator (PSPS), which includes a 4-mm sieve, can measure peNDF on-farm. Lactating dairy cows require about 20 to 22 percent peNDF for adequate chewing and rumen function, but recent research suggests that the particles do not need to be excessively long. It is time for us to re-evaluate our recommendations for ration particle size and minimize excessively long particles.

Research conducted at the Miner Institute found that by feeding a diet with finely chopped hay, in a corn-silage based diet, total eating time of the cow was reduced by 45 minutes per day in comparison to a diet with long hay. Research from China published in the Journal of Dairy Science found a similar change in total eating time when the peNDF concentration of the diet was altered by changing the forage to the concentrate ratio. In this study, an elevation in the peNDF of the diet from 23.9 to 29 percent resulted in 51 more minutes of eating time daily.

These studies demonstrate that the length of particles in the diet can have a dramatic impact on the cow’s time budget and how long it takes the animal to eat, and it can be easily explained.

When fed a silage-based diet, the dairy cow reduces the particles in the diet during initial mastication (eating) to a rather uniform particle size, regardless of the initial size in the feedbunk. This has been determined by collecting boli that have just entered the rumen and then evaluating their particle size. While conducting the previously mentioned study at Miner Institute, we were able to collect boli for a portion of the project and evaluate particle size. The results can be found in Table 1. In this study, there were four diets fed as total mixed rations that differed in peNDF and undigested NDF measured at 240 hours of in vitro fermentation (uNDF240). 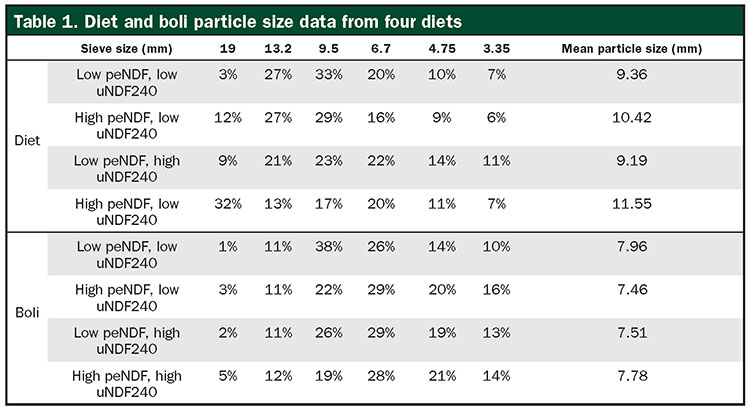 The top portion of the table contains the particle distribution for the four diets. Note that the two high peNDF diets contain a larger amount of particles that were retained on the 19-mm sieve. This is also reflected in the calculated mean particle size of the diet, with the two high peNDF diets having a longer average particle size. But, interestingly, the average particle size for the swallowed boli is quite similar across all four diets. The greatest change reflected the shift of particles that were 13.2 mm or greater to a smaller particle size when chewed during eating.

This research agrees with work conducted by Italian researchers who found that individual forages and silage-based total mixed rations have a similar average particle size entering the rumen after initial mastication. This research group observed that cows must chew more per unit of fiber when the forage or ration particle size is longer.

So what should guidelines be?

With all of this information in mind, we recommend that the quantity of long particles in the ration be reduced. Last year, the Miner Institute suggested a new set of Penn State Particle Separator guidelines, and these guidelines can be found in Table 2.

A reduction in the amount of particles that are retained on the 19-mm sieve will result in a more uniform diet and one that is more difficult for the dairy cow to sort. Recent research from Cornell University confirms earlier work at Penn State that particles retained on the 19-mm screen are most likely to be sorted. This reduction in size can be achieved by shortening the theoretical length of cut (TLOC) for harvested forages or the use of a bale processor for straw or hay. One benefit that will also arise from shortening the TLOC is that the forage will pack better in the bunk in comparison to a longer TLOC.

The take home message is that there is the opportunity to reduce the excessively long particles in the diet. The goal should be to reduce the particles retained on the 19-mm sieve and focus on particles that are retained on the 8- and 4-mm sieves in the PSPS. This will allow us to present a diet that is more uniform in particle size, resistant to sorting, still physically effective, and mindful of the cow’s time budget. 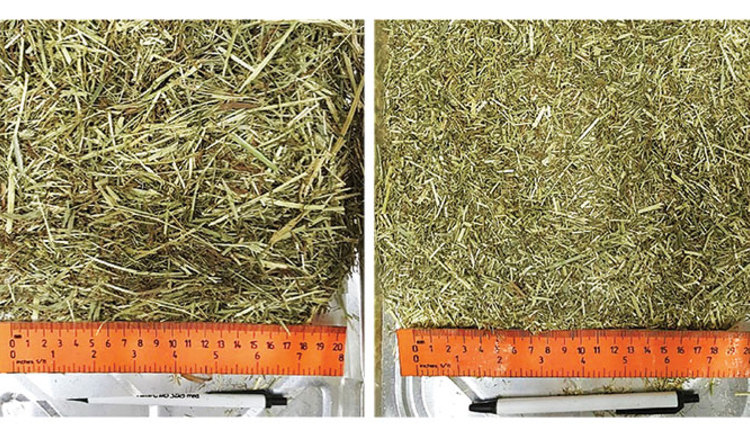