Dairy needs to come out good after this 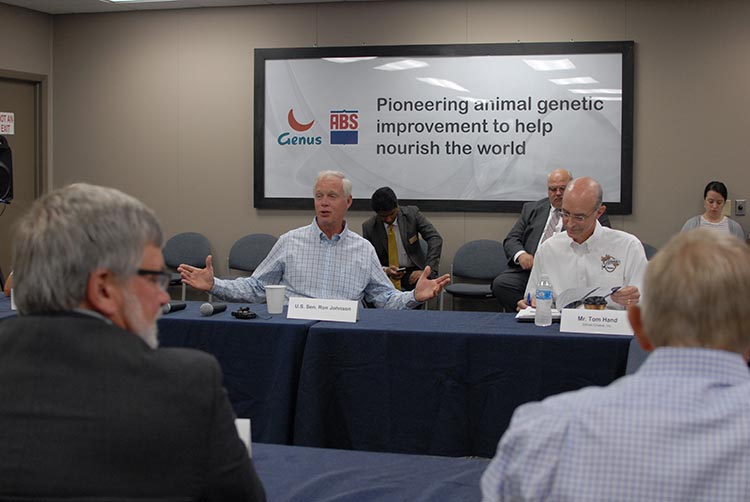 “If we are going endure (low prices) over the course of having tariffs, we need to come out good on the other side,” said Wisconsin dairyman Chris Pollack during a recent listening session with U.S. Senator Ron Johnson (R-WI).

“We don’t want to go back to where we were pre-NAFTA, where we were looking at 45 percent tariffs in Canada and Mexico at that point in time,” added dairy farmer Dave Daniels from southeastern Wisconsin.

“The USMCA is absolutely the most important trade agreement that we have moving forward,” said Kevin Krentz, a lifelong dairyman from central Wisconsin.

Those were among the comments shared by dairy producers who attended a listening session held by Senator Johnson on Friday, July 26, at ABS Global, one of the world’s largest artificial insemination centers.

The United States-Mexico-Canada Agreement or USMCA is the pending trade agreement between the United States, Mexico, and Canada. It would replace NAFTA or the North American Free Trade Agreement.

In 2018, the top three trading partners for Wisconsin agriculture were Canada, China, and Mexico — in that order. While trade battles are boiling with all three countries, China is the most embroiled battle with trade now down over 30 percent between Wisconsin and China. That ultimately caused a reranking in trade in the current year: Canada, Mexico, and China.

While those numbers represent Wisconsin trade, the numbers are similar for many other U.S. states when it comes to agricultural sales.

Brought value to all three countries
“I thought NAFTA was a huge success,” commented Senator Johnson to those attending the DeForest, Wis., listening session. “We had a trade surplus with both Mexico and Canada. Mexico is our largest cheese market.

“Fine,” he said of the current action between Canada, Mexico, and the U.S. “Update it. Let’s get USMCA ratified as quickly as possible,” he said. “I am still scratching my head why we did not ratify it in the last Congress when we had Republicans in control of the House,” he went on to say.

“The holdup right now is in the House,” said Senator Johnson.

As for the logistics in passing it, “There is no opening up this deal,” he said of the pending USMCA agreement. “That’s not the way it works. The trade deals are negotiated and ratified by the countries,” he said, alluding to the fact that Congress needs to have an up or down vote on the matter.

Important to dairy
“On balance, fair trade is very important to the agricultural community, especially the dairy community that exports a lot of products we create, and we need places to sell those,” said Nate Zwald, chief operating officer of ABS Global. “The dairy farm community has had a challenging four- to five-year run, and part of that is if we can open up more export markets, that will be very good for the dairy farmers of Wisconsin and the country,” continued Zwald.

“Likewise, for our business, we sell lots of semen around the world, almost all if it is produced here in Wisconsin, and we need those markets to be open to take U.S. products,” said Zwald whose company exports to over 100 countries around the globe. “It’s very important for our business abroad.”

Reminiscent to a generation earlier
“Five to 10 years from now when we look back at history . . . my dad’s generation had to work through the late 1970s and early ‘80s and depressed prices . . . I think we are going to look at this time frame in the past five years in a very similar light,” added Pollack. “The challenge and timing of these tariffs have come along at a time when we already endured three to four years of tough prices. Then you throw the tariffs on top of it when farmers were starting to see a little light at the end of the tunnel,” said Pollack.

What does this mean to dairy farmers?
“From the dairy perspective, over history, if the U.S. can export just a simple 1 percent more of our production, it has a huge impact on prices,” said Zwald whose family dairy farms. “If we export 2 to 3 percent less, we are talking about a $2 to $3 downward swing,” said Zwald of milk prices on a per hundredweight basis.

Johnson’s takeaways
“They (farmers) are suffering,” he reconfirmed to the dozen dairy farmers in attendance. “If prices were depressed before the trade wars, the trade wars are not helping that whatsoever. I am making the administration well aware of the pain being felt in Wisconsin agriculture and Wisconsin manufacturing as well,” continued the U.S. Senator.

“Sixty to 70 percent of our trade in Wisconsin is to Canada and Mexico, so that takes care of an awful lot of it,” said Johnson if USMCA were to be ratified by Congress.

When asked what he heard from his constituents at this listening session, Senator Johnson had this to say,” Get it ratified. To a person, they want ratification.”

Creating a culture during crisis

Hoard's Dairyman Intel
There are reports milk is being dumped