This teenager became a full-time dairyman

Following the untimely death of his father in 2003, Michael Oosten became a quick study on all things dairy.

By Deena Migliazzo
The author is a graduate of Washington State University and her family has a dairy farm in Merced, Calif. 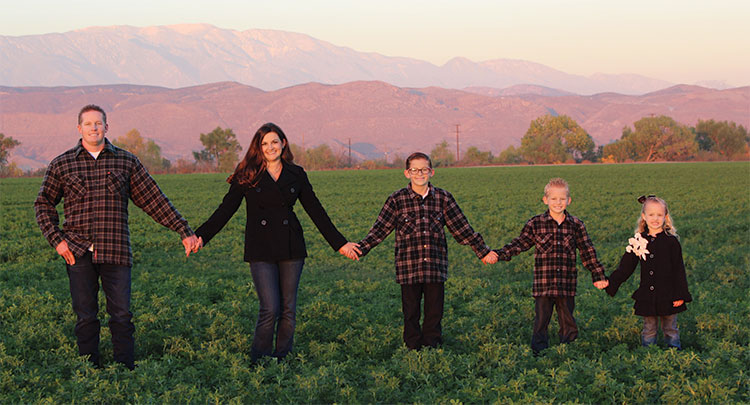 Dairying is a family affair for Michael Oosten and his family. Shown left to right are Michael and his wife, Jackie, and their children Mark, Jack, and Allie.

For most 17-year-old teenagers, managing the family business and finances is not the first thing that crosses their mind in the morning. The same held true for Michael Oosten . . . until his father unexpectedly passed away in 2003.

Due to those repercussions, the younger Oosten suddenly oversaw the family dairy operation and finances. Having little practical experience in managing employees, finances, raising animals, or farming, Oosten was faced with many challenges that later blossomed into great successes.

Fast-forward 16 years, Oosten, owner of Marvo Holsteins in Lakeview, Calif., turned his dad’s dairy into two facilities. Over the course of many years, he doubled the number of animals and even started a second dairy and farming enterprise. However, it was a long journey for the Oosten family to get to where they are today.

Michael Oosten’s grandfather, Marinus Oosten, migrated from the Netherlands in 1929 and started a dairy in Paramount, Calif., with 20 cows. He later created a partnership with his son, Marvin, in the 1970s and eventually built the current dairy in 1988. The dairy was designed to milk 1,600 cows, and at the time of Marvin’s death, the dairy was milking 1,400 cows and housing 1,400 additional calves and heifers.

Oosten grew up on the family dairy with his mother, Marla, and two younger sisters, Jeanna and Kristen. He enjoyed spending his formative years helping with calf care and tractor driving, duties that didn’t exactly teach him all aspects of running a business. At the time of his dad’s death, Oosten quickly became the man of the family. To bridge the learning curve, he turned to the family’s accountant and herdsmen for guidance on both the financial and dairying side of the business.

Maintaining the dairy’s profitability was one of the biggest challenges for Oosten, as his understanding of finance was limited at the time . . . not knowing how much feed cost or when to purchase feed was challenging for the then 17-year-old Oosten.

“I was pretty inexperienced at the time, not knowing the ins and outs of business or how things should and need to look, I basically did chores growing up . . . going from chores to management was a drastic change,” Oosten said.

After graduating high school, Oosten enrolled in business courses at the University of California-Riverside, but after a few semesters he decided to transfer to California Polytechnic State University for classes more specific to dairy science and management. He enrolled in all undergraduate dairy sciences courses hoping to bring skills he learned in the classroom to the family’s dairy.

Oosten attended California Polytechnic State University for six months before returning to the family dairy and starting his role as manager and owner of Marvo Holsteins.

Challenges that led to success

Oosten’s eagerness to improve and grow his operation led him to making some substantial changes to the family business.

“I always wanted to get into more row crops to grow more of my own forage. That was my new adventure. My dad never really wanted to do anything with row crops; it really didn’t make economic sense in his day,” Oosten said.

As the financial crisis hit in 2009, many dairies closed their operation, opening the opportunity in 2010 to move the overcrowded springers to one of the nearby vacant dairies in the area. Oosten also started a second dairy, milking 300 cows at a vacant facility and later moved to a larger dairy after a neighbor approached him with the opportunity to rent his farmland and purchase equipment, growing both his farming and dairy operation.

The world’s growing population, water policy issues, and the growth in hay exports from California were the main drivers for Oosten to start expanding the farming operation. At the time of his father’s death, Marvo Holsteins’ operation consisted of no land base. By 2013, Oosten grew the farming aspect to 200 acres, and today, the dairy farms 1,500 acres. Oosten uses a variety of irrigation systems including sprinklers, drip, and center pivots. Each irrigation system is based on the land’s topography. The main crops grown on the farm are alfalfa, corn, ryegrass, and wheat.

Another driver that encouraged Oosten to start the farming operation was being able to have more control over forage quality fed to the dairy’s milk cows. This additional oversight resulted in more milk per cow. Oosten continued to grow the dairy herd from 1,400 to 2,500 cows during the ensuing years. These days, the average milk production between the two dairies is 76 pounds with a 3.75 percent butterfat and a 3.26 percent protein.

With the help of a new nutritionist, Abraham du Plessis, who came on board in 2013, Oosten improved production, cow comfort, and overall welfare of the herd. Along the way, the nutritionist taught Oosten how to identify the little aspects that can affect a cow’s production, such as bedding maintenance and water trough cleanliness.

“He would see a pen, for example, and say, ‘You notice that?’ Most of the time it would be a water trough overflowing; it’s the little things he notices,” Oosten said, eluding to the fact that little things add up to create larger issues.

Being able to identify the imperfections on a dairy is what helped Oosten improve his operation and continue to implement new strategies and tactics.

The California native seeks never-ending improvement. Oosten started focusing more on dairy genetics this year by utilizing sexed semen on high-genetic cows, along with switching from blood testing to ultrasound on pregnancy checks.

Opportunities for the dairy industry

Oosten believes that automation is one of the biggest opportunities for the dairy sector. This especially holds true when it comes to assisting with labor availability and cost.

“In the last two years, labor cost has been terrible; you are paying people more than ever and getting less than you ever got,” Oosten said. “Many workers just don’t seem motivated to do a good job.”

After touring robotic dairies in the Midwest, Oosten isn’t convinced that robotics has been proven to work on large-scale dairies like his. The transition from manual to robotics has been difficult for many dairies that have made the switch.

“The robotic carousal is your best bet for a large, commercial dairy. Dairies that already have a big carousal will probably be able to adapt the automation, but for a herringbone dairy like mine, the technology hasn’t been refined,” Oosten said.

Milk prices for the last couple of years have left dairymen struggling financially. Oosten believes California’s move to the federal order has been a step in the right direction. Another challenge is all the products that are now available to mimic milk.

“This isn’t new. We have seen this before with margarine, and now trans fat has links to cancer and all sorts of stuff that has bad health attributes,” Oosten said. “I think it is something we will overcome eventually, but nonetheless, it is going to affect our market share and cause a dent in sales. But there is still hope with the example of the return to real butter,” he added.

The opportunity for the dairy industry is to promote the proven health benefits of dairy products, suggested Oosten. Dairy products all contain natural ingredients with short product labels compared to milk alternatives with many added ingredients.

“The consumer doesn’t get sold on science alone, that’s going to be the industry’s job; not to just educate, but to make dairy great again,” Oosten said.

Oosten cited the example of Domino’s pizza and how the company used “synthetic cheese additives” as a topping in the 1990s. Domino’s tried to cut costs by using “synthetic cheese” but instead caused a drop in sales, resulting in a return to real cheese and a spike in sales for both industries.

Another example Oosten uses is McDonald’s return to real butter.

“Fat was demonized for years, and now fat isn’t what’s making people fat, it’s the carbs and high sugars,” Oosten said. “It wasn’t whole milk, it wasn’t butter, it was all these other alternatives.”

Now the science has proven that butterfat isn’t the reason for obesity; the return to real butter has made its way back to the market, noted Oosten, who closely follows dairy promotion and marketing patterns. The dairy industry can use proven science to support the argument and can use past experiences with alternatives to move forward in a more effective way.

Oosten might have not entered into the dairy industry the way he wanted, but he has been able to overcome challenges and accomplish the many goals he has set. Today, Oosten is on the board of directors for the National Dairy Council for Region 2 and a delegate for Land O’Lakes Cooperative. He recently completed the Holstein Foundation Young Dairy Leaders Institute’s Class 10 of the program. At that leadership conference, Oosten learned about how to advocate for the industry on a global platform.

Oosten hopes to continue improving his operation’s efficiency, but he also wants to see the dairy industry unite to find a solution to low milk prices and implement more technology for large-size dairies in order to make them more economically viable.

It’s all in the flow
Milk Quality
Related to:
features, farmlife
In Features