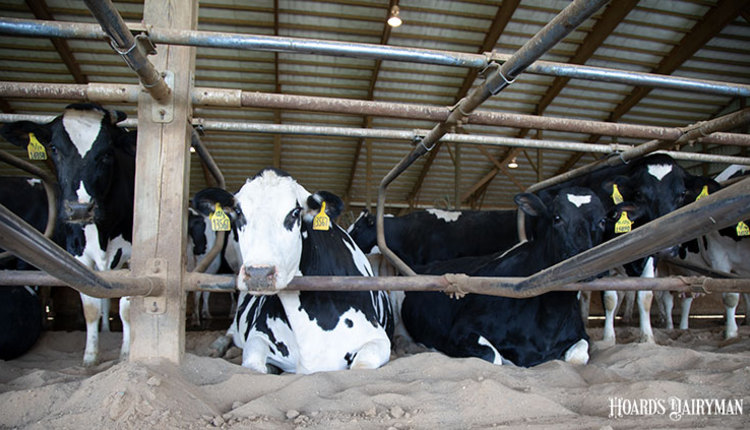 When we talk about stocking density in a dairy cattle barn, most often, we base that rate on the number of stalls. For example, if a freestall barn has 90 stalls and houses 100 cows, we consider the stocking density rate to be 110 percent.

Overcrowding a barn can have negative impacts on milk production and animal health, but stalls are not the only limiting factor. In a Penn State Extension newsletter, Agricultural Engineer John Tyson pointed to several factors that could restrict the number of animals a barn can house.

Stalls are easy to count, but feeding space is also straightforward to measure. Tyson explained that the total usable bunk space divided by the number of cows in the pen gives the inches of feeding space per cow.

The recommendation for how much bunk space is needed per cow isn’t quite as clear. Tyson said the general rule has been 24 inches per cow, but today’s cows are bigger than they used to be. Age of cows in the pen (first lactation versus mature cows) plays a role in this, and so does number of hours feed is available each day.

Ventilation also impacts the ideal stocking rate. The goal of any ventilation system, according to Tyson, is to maintain excellent air quality by controlling moisture, temperature, gas, and pollutant levels. “Air quality inside the shelter should be equal to or better than air quality outside the shelter,” he said.

Tyson also mentioned water and inches of drinking space per cow. To determine water availability, add up the accessible linear water space in the pen and divide by the number of animals. Tyson said the goal for lactating groups is at least 3 inches per animal.

Water flow rate is also important. He said to observe waterers during times of peak use (for example, when cows return from the milking parlor) and take note if any go dry because demand is outpacing water delivery.

Tyson shared a few other factors that can be limiting when barns are overstocked. One is the ability for cows to move around in the pen. Wider alleys can create more open space for movement.

Pen size also often determines milking group size. As groups get bigger, cows may spend more time away from the pen. This means less opportunity to eat, drink, and rest.

With all of these factors at play, the maximum stocking density that will work successfully varies for each barn. “There can be many limiting elements to any housing system,” Tyson said, “but just like a chain, the housing system is only as good as its weakest link.”