A solution for the farm labor headache 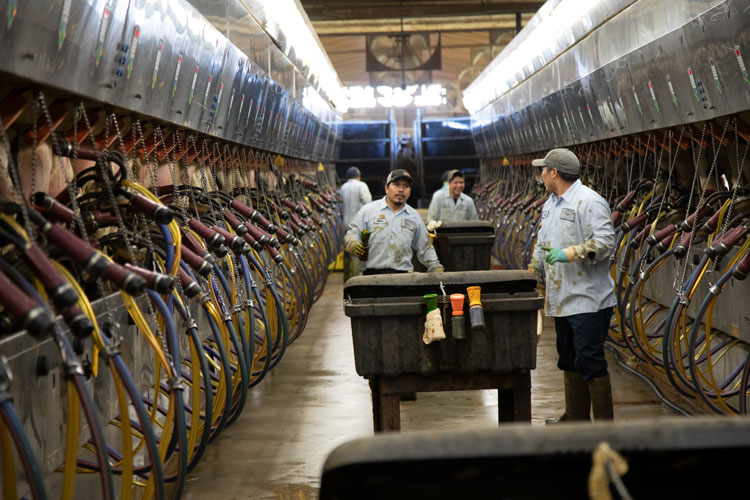 “We brought a bill that addresses every single issue that we need to solve,” stated Mike McCloskey, Labor Issues for Dairy chairman for the National Milk Producers Federation (NMPF). That statement was made at the introduction of the Farm Workforce Modernization Act in Washington, D.C., on October 30.

Representatives Zoe Lofgren (D-Calif.) and Dan Newhouse (R-Wash.) took the lead on the bipartisan measure that would create big changes in accessibility of farm labor if passed. A breadth of agricultural organizations has spoken in support of the bill, including NMPF, United Fresh Produce, and the National Turkey Federation.

Rep. Lofgren said that the proposed measures will address the “uncertainty and fear” that farmworkers across the country live with. Additionally, she cited the improved stability that farms will benefit from with more legalization routes for their employees.

How it works
The bill provides for two paths of earned legalization. With proof of at least 180 days of employment in agriculture over the last two years, an individual will receive a five-year agricultural visa. The individual must then work at least 100 days in agriculture each of those five years to be able to renew the visa.

The second option is to request Legal Permanent Resident status, which comes with a $1,000 application fine. But before an individual is eligible to apply, they must either:

1. Work another four years in agriculture if they worked in U.S. agriculture for at least 10 years before enactment of the law.

2. Work another eight years in agriculture if they worked in U.S. agriculture for less than 10 years before enactment of the law.

The bill is also designed to make the H-2A program more effective and accessible for farmers; for dairymen, this means strategies to provide a year-round supply of H-2A workers. The act will fill this need by dedicating an extra 40,000 green cards each year for employers to sponsor farm workers and by creating a new program in which a certain number of laborers, set by the secretaries of agriculture and labor, could work under temporary three-year visas.

Finally, the act aims to phase-in a national E-Verify system that would be mandatory only for agricultural operations and businesses. This would allow employers to confirm the legality of their employees and then follow the appropriate legalization path if necessary.

What it means
Farmers, perhaps dairy farmers most of all, are hungry for some kind of solution to the labor problems that have plagued their harvests. The optimism of the agriculture community indicates that the Farm Workforce Modernization Act may be that answer.

Rep. Newhouse highlighted the historic nature of the bill during its public introduction but also recognized that there is still work to be done. “Do you know when the last time any significant agricultural labor legislation was passed in the House of Representatives?” he asked. “1986.”

A full synopsis of the bill can be found here.