The three-title bill would address current workers, improve the existing H-2A program, and require mandatory use of E-Verify for farm employers.

By Charlie Garrison
The author is president of The Garrison Group LLC and a longtime dairy policy adviser. 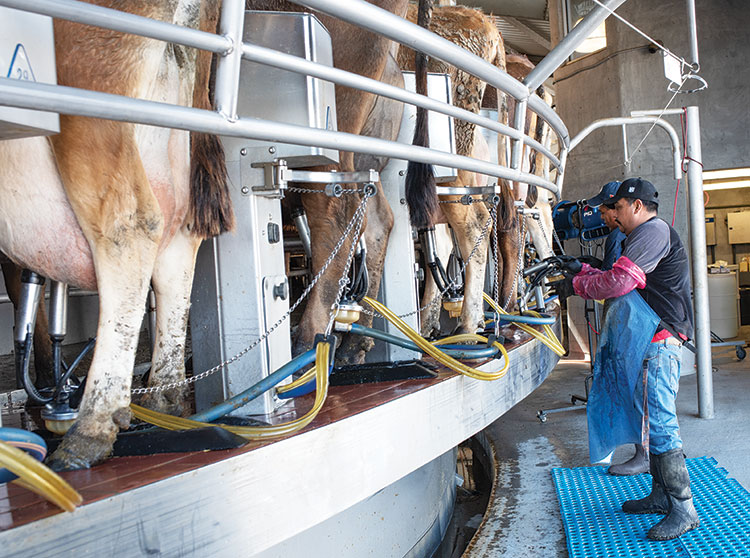 Farm workers with 10 or more years of agricultural experience must agree to work 100 days or 575 hours on farms in each of the next four years to maintain work status under HR 5038. For those with less than 10 years, the same hours and days apply, but the work requirement jumps to eight years.

The U.S. House of Representatives has begun consideration of HR 5038, “The Farm Workforce Modernization Act.” It is a bill that fully addresses both immigration reform priorities for the dairy industry by offering legal status for current improperly documented workers and allowing farmers with year-round labor needs to petition for temporary workers to fill those jobs.

Few would argue the bill is perfect. However, there is ample opportunity for improvements by the full House of Representatives and again when a bill begins moving in the Senate.

It may sound counterintuitive, but a divided U.S. Congress presents an opportunity to accomplish the kind of effective farm worker visa reform that has eluded agriculture for two decades. The House version has 51 co-sponsors from 21 states with 27 Democrats and 24 Republicans. With Republicans in the majority in the Senate and Democrats in control of the House, politics forces the issue to the middle for both parties.

For those already here

The new House bill has three titles. Title I offers earned legalization for the current workforce. With past, present, and future work requirements and a fine required to go farther than work authorization in agriculture, the bill legitimately neutralizes the shouts of “amnesty” for the vast majority of Americans and their elected officials, who genuinely want to solve this problem.

The earned legalization in Title I starts with protection from deportation for those who can document 180 days of work in agriculture over the past two years and are currently working on a farm in the U.S. Those are the past and current work requirements in the bill. Immediate family members residing with the worker can also stay but do not automatically receive work authorization.

Following rulemaking, those who meet past and current work requirements will be placed in “Certified Agricultural Worker” (CAW) status. Workers with 10 or more years of past work in agriculture must agree to work 100 days or 575 hours in agriculture each of the next four years to maintain work authorization. Those with less than a decade of work on farms in the U.S. must agree to the same number of days or hours for the next eight years to stay..

After completing the future work requirement, the worker may choose to simply maintain CAW status in five-year renewable increments or, with the payment of a $1,000 fine, choose to apply for Legal Permanent Resident (LPR) status. That “green card” allows employment in any job in the U.S. and places the worker at the back of the line for U.S. citizenship.

Back to the divided Congress forcing the issue to the middle, the House bill does not create a new pathway or allow a worker applying in this manner to “jump the line” to U.S. citizenship. Equally important on the politics side of the issue, a worker who has gotten right with the law may access the same pathway to citizenship that exists for other applicants.

Title II of the bill makes improvements to the existing H-2A program for temporary and seasonal work in agriculture. It also extends H-2A to allow farmers with year-round labor needs to petition for temporary workers to fill those jobs.

The bill would streamline the H-2A program by establishing a single online portal for petitioning for workers. That would replace the current three-agency process. That alone will allow more timely access to workers when they are needed for seasonal jobs. It reduces paperwork and costs for employers by allowing for visas of up to three years in length instead of the current annual petitions.

The wage structure in H-2A would continue to be based on the Adverse Effect Wage Rate (AEWR) established for each state by the U.S. Department of Labor every year. The bill would freeze the 2020 AEWR at the 2019 level. Beginning in 2021, the AEWR could not grow more that 3.25 percent or decline more than 1.5 percent from one year to the next in most states. The annual adjustment in higher minimum wage states or local jurisdictions could not exceed 4.5 percent. Rulemaking on a new wage structure is to begin in Year 8, with the secretaries of labor and agriculture to set a new one or eliminate the AEWR entirely beginning with Year 10 under the bill.

Transportation to and from the home country, and housing for the worker while in the U.S., continue to be requirements for the employer. The bill does require written heat safety plans of all H-2A employers and would allow H-2A workers to sue employers over disputes after mandatory mediation if either side requests it within 90 days of a complaint being filed.

Year-round H-2A includes the same employer requirements as the seasonal program. In addition, the employer must pay the cost of the transportation for an annual round-trip visit home for the worker. There is some flexibility built in with that requirement in that the trips can be as much as 14 months apart. Workers in year-round H-2A must be outside the U.S. for a cumulative 45 days during the three-year work authorization period.

Employers seeking workers for year-round jobs must offer to provide housing for the immediate family of the worker if that is the prevailing practice in the industry or area. The employer may charge rent for the added cost of housing the family.

Dairy employers are required to have written worker safety and anti-sexual harassment and violence plans. All nonfamily members working with animals on dairies must complete a worker safety training program.

The current seasonal H-2A program would continue without numerical limitations, or “caps.” In year-round H-2A, there would be 20,000 visas available each year with half of those allocated to dairy employers. Beginning in Year 4, that number can grow by as much as 12.5 percent each year. In Year 10, the U.S. Secretaries of Labor and Agriculture are to determine if a cap is needed going forward.

Two provisions of the bill offer some relief on the cap. First, an additional 40,000 green cards are authorized annually with first access reserved for farm employers. And current workers gaining status through Title I of the bill are considered to be domestic workers going forward and not part of H-2A.

Title III of the bill would apply what is referred to as “Mandatory E-Verify” for employers covered under the legislation. Employers would be required to use the federal online system to confirm the work authorization for new hires with documents that expire. That would include CAW and H-2A workers under the program. Implementation of the E-Verify requirement for employers is timed to coincide with workers becoming available under the terms of the legislation.

Immigration reform is the most complicated domestic political issue of our time. Farm worker visa reform has proven no less difficult for Congress to address. The Farm Workforce Modernization Act may be the best opportunity for a resolution agriculture has had in some time, but there is undeniably a long way yet to go.

It’s all in the flow
Milk Quality
Related to:
features, dairy policy, employees
In Features