Almond milk may be killing honeybees 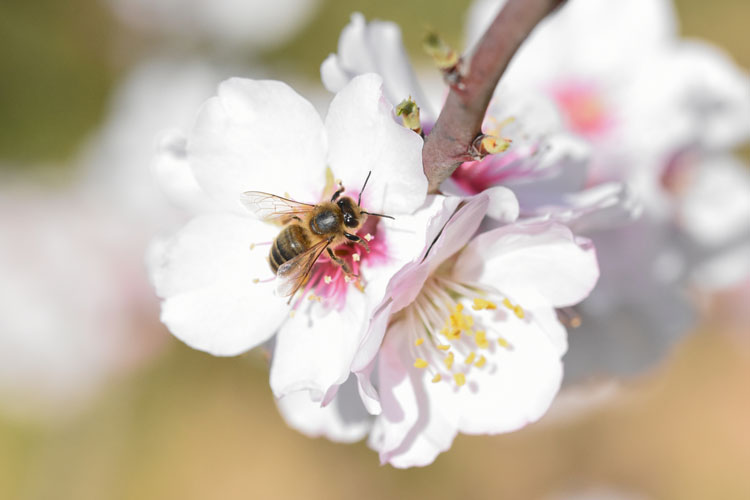 There’s a developing story that presents vegetarians and vegans with a quandary.

Those who drink almond juice (almond milk) may be helping to kill billions of bees. That’s far from the environmentally friendly narrative, which that consumer group has come to embrace.

As it turns out, pollinating all those almond trees in California’s Central Valley is tough and dangerous work. Pesticide exposure, diseases from parasites, and habitat loss all team up to send bees to an early grave. Those threats are further compounded by the monoculture environment created by California’s $11 billion almond industry.

Almonds are hard on bees
A recent survey of commercial beekeepers showed that 50 billion bees were wiped out in just a few months during the winter of 2018-2019. This represented one-third of America’s commercial bee colonies.

“The high mortality rate creates a sad business model for beekeepers,” Nate Donley, a senior scientist for the Center of Biological Diversity, told reporter Annette McGivney. “It’s like sending bees to war. Many don’t come back.”

That’s according to the article “‘Like sending bees to war’: the deadly truth behind your almond milk obsession,” by McGivney for The Guardian.

Bees are a must for almonds
The article is quite a compelling read as McGivney contends, “Bees are essential to the functioning of America’s titanic almond industry — and billions are dying in the process.”

Almonds are indeed big business. Nut juice, which some marketers prefer calling milk, posted $2.1 billion in sales during 2017. That’s a 61% gain compared to just five years earlier. Almond milk commands a 64% market share with soy a distant second at 13%, according to research from the Mintel Group.

It’s been estimated that California’s Central Valley is home to 80% of the world’s almond supply. And as consumer demand grows, more almond trees get planted. But there’s a catch — those enormous orchards cannot function without bees.

Bees are so vital to almonds that the next largest crop in need of pollinators — apples — only need one-tenth the bees.

For Dennis Arp, a lifelong beekeeper who has a vast apiary, half of his revenue comes from pollinating almonds. In fact, renting bees is far more lucrative than selling honey itself.

But that lucrative part comes with high costs as mentioned earlier — lots of dead bees.

In October 2019, Arp found out that 150 hives had been wiped out by mites. That was 12% of his bees, noted McGivney in writing for The Guardian. She noted that this shouldn’t be happening with a bee expert like Arp, age 67, who has decades of experience.

This issue involving bees and almonds is just beginning to gain traction. More will be learned with each passing year. In the meantime, cow’s milk may do the human body good, but almond milk is sure wreaking havoc on a bee’s body.

In the alternative dairy world that creates a challenging decision — drink plant-based milk and kill bees or turn to another alternative.

How far out should a farmer contract milk?
By Corey Geiger, Managing Editor