It's a party of five

Facing an uncertain dairy future, Brian Gerrits shares how he and four other families collectively transformed their business.

By Carla Wardin, Michigan dairy farmer
The author and her family own and operate a sixth-generation dairy farm near St. Johns, Mich. 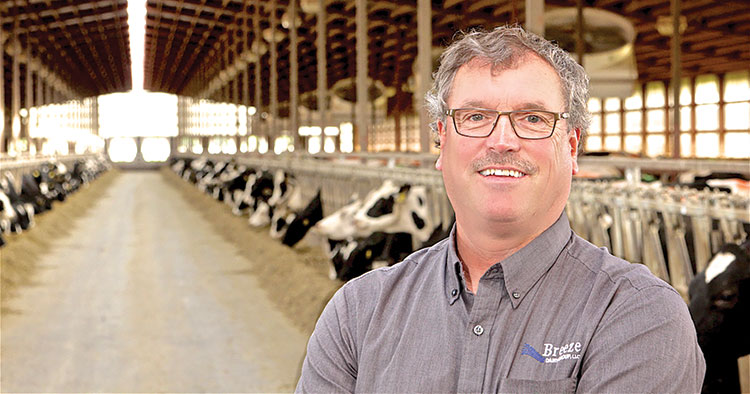 Brian Gerrits, along with the partners in the Breeze Dairy Group, have grown their dairy business a great deal. Even through all this growth, Gerrits admits, "My heart is still with my home farm. I still live there, and I still see it every day."
At the Great Lakes Regional Dairy Conference on February 6 to 8 in Frankenmuth, Mich., producers gathered together to hear from industry experts on current topics, including retrofitting buildings, transitioning cows, and operating new ventures.

Brian Gerrits, partner and CEO at Breeze Dairy Group LLC, offered his perspective, which differs from that of many organizations. At Breeze Dairy Group, five separate families came together to form a partnership to milk 10,000 cows.

Gerrits didn’t start farming on a large operation. He grew up on a dairy farm in De Pere, Wis., where he and his wife, Lynn, raised three boys. They partnered with his parents before becoming sole owners in 1990.

Gerrits first realized he wanted to take his farm a different direction after his dad died and he and his wife were operating on their own. He and Lynn had won an outstanding farmer award from their co-op, and as a result, they went to the 1990 National Milk Producers Federation Council meeting in Florida.

A tour that opened his eyes

“Part of the meeting was a tour of farms in northern Florida, and one was a 5,000-cow dairy,” Gerrits said. “They had three double-12 parlors under one common roof. I was on the catwalk, looking over the parlor area, watching all of the cows filing in, the feed trucks coming and out, and all the activity. I thought of my 60-cow dairy, where it was taking hours to milk them, and here they were milking 60 cows in a few minutes.”

Gerrits said he left feeling sick to his stomach, wondering how he was going to stay in the dairy business.

“This was a real ‘aha’ moment for me,” he said. “I realized I was going to have to change to stay in this industry. Some people get caught up in thinking they have to hang onto what they’ve got. They get married to how they do things, and they think the industry has to adjust to make them survive instead of making the change themselves.”

From 1995 until 2000, they formed a partnership with a nonrelated family to milk 500 cows. They then joined several other nonrelated partners to construct and manage a 1,500-cow dairy. This partnership didn’t work out, and Gerrits left to work as a consultant for a feed company.

Gerrits was then approached by his current partners. They asked him to work on a business plan, and then join a construction of a new dairy. They began milking 1,500, expanded to milk 3,200, and then in 2013, formed Breeze Dairy Group. They have since purchased two more farms to form the 10,000-cow milking herd.

“I enjoyed consulting, but it wasn’t a hard decision to go back to a dairy,” Gerrits said. “Like a lot of farmers, my passion is being in the trenches actually farming.”

It begins with respect

Gerrits gets a lot of questions about how to form and maintain a successful partnership. He stresses that respect is the key.

Not only do the partners have to care about each other’s well being, but they also have to work well together as a business.

Breeze Dairy Group holds a formal board meeting every month, and they haven’t missed a month for 18 years. Before the meeting, every board member is sent the monthly financial report and balance sheet. Of course, operating this way is different than when a farmer works alone.

“Yesterday was a good example,” Gerrits said. “We had to make a decision as a board. When you’re farming by yourself, you do your homework, run the numbers, and make your decision. When you’re making decisions as a board, not only do you do that, but you have to answer all your partners’ questions, show everything, explain everything, and write a detailed business plan. It’s a great exercise, because nothing is overlooked. It forces you to make better decisions.”

Gerrits and his partners at Breeze Dairy Group also field questions about being a mega farm, or a corporate farm. Their expansion and building in the past has generated headlines asking questions about their size and setup.

“We’re a group of families that are farming together,” Gerrits said. “We haven’t even had any change in the five families from the very beginning, and now we’re working on transferring ownership to the next generation. In our hallway, we have pictures of our home farms to show where our roots are. My heart is still with my home farm. I still live there, and I still see it every day.”

Gerrits has experienced many more eye-opening moments during his farming career, but his initial one had the biggest impact on his career path.

“I feel so strongly about the partnership. If we hadn’t done it, I’d no longer be farming. There’s no doubt in my mind,” he said.

The future of partnerships and the dairy industry in general is interesting to Gerrits, as producers try to plan for the future. Breeze Dairy Group’s latest setup was a 72-stall rotary.

“I’ve watched the evolution of the rotary, but we haven’t had a project where it fit in from an economic standpoint,” he said. “When I’m in the conference room overlooking the parlor, I can set my watch to the end of the first shift. It’s never more than five minutes either way. The rotary makes it work like clockwork.”

Breeze Dairy Group is looking into robots for another farm, since Gerrits projects that a high percentage of cows 10 years from now will be milked by robots. The speed and growth potential continues to impress him.

“I read an article this week that said there's a dairyman in Texas that milks 100,000 cows, and at some point there could be 90 farmers supplying milk to the entire country. I don’t know if that will ever happen, but it was another 'aha' moment,” he said.

This year, Gerrits is preparing to pass on some of his responsibilities. He has decided he’s ready for retirement, but he will still continue as an owner and board member.

“I’m going to start passing the baton. My wife and I have travel plans, and we have a lot of friends and family to visit. I’ve got a few things on my bucket list,” he said.
Related