Where does the energy go?

A study of five Midwestern dairies unearthed which parts of the farm use the most electricity.

By Kirsten Sharpe     Kate Creutzinger     Mike Reese And   Eric Buchanan
The authors are all with the University of Minnesota West Central Research and Outreach Center in Morris, Minn. 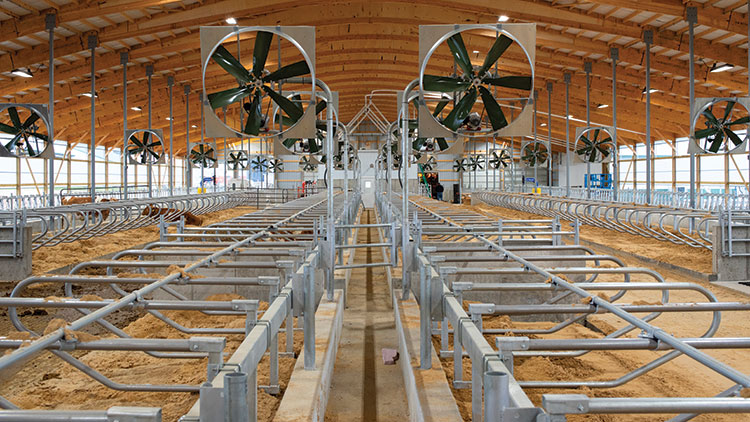 Ventilation and lighting are often two areas that use the most electricity on dairy farms.

One of the biggest challenges we face today is how to feed the ever-growing population while producing our food in a manner that is environmentally, socially, and economically viable. Consumers have become increasingly concerned about how their food is produced, where it is produced, and in what manner it is produced.

Food that is raised or grown utilizing environmentally conscious methods is often sought after in grocery stores. In response, the dairy industry as a whole has been focusing on sustainability through the entire production chain.

Baseline data on fossil fuel consumption within dairy production systems is scarce, and determining baseline energy use is the first step in investigating opportunities for lowering a farm’s carbon footprint. The objective of our study was to measure total electricity use and determine specific areas of high energy consumption on Midwestern dairy farms.

Five operations representative of typical Midwest dairy farms and located in Minnesota were evaluated for the study. The dairy farms were:

1. Farm A — a 9,500-cow cross-ventilated barn with a rotary milking parlor

5. Farm E — a 275-cow, low-input, and pasture-based dairy with outdoor housing and a parabone milking parlor.

Electricity use was tracked from July 2018 to December 2019. There were 302 electric components monitored across the five farms. They were monitored on the farm side of the electric utility meter to evaluate areas of highest energy usage. Some of the monitored electric loads included panel fans, water heaters, compressors, chillers, and manure pumps.

The electric loads were monitored by data loggers and electric current sensors at the circuit panels. Electrical use data (kWh) of each load were collected and analyzed on a monthly basis. In addition, monthly inventory of cows on-farm, cows milked per day, and milk production was recorded. Bulk tank production records, including milk, fat, and protein, were also documented. 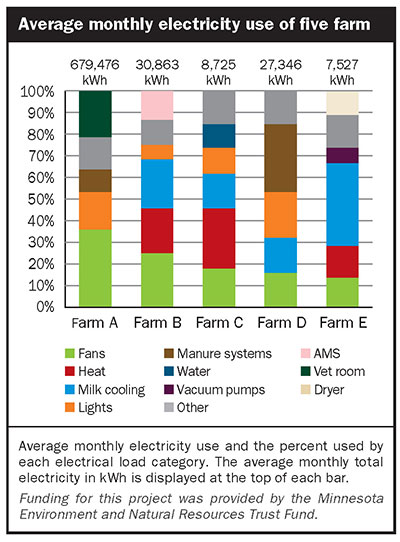 Average electricity used per month and the total monthly use by category (on a percentage basis) is shown in the figure. Fans were the largest electrical load in Farm A and Farm B. Farm A also utilized a veterinary room that included a separate maternity calf area and a 16-stall, single-sided milking parlor for fresh cows. The six robotic milking systems on Farm B averaged 13% of total electric use.

The largest electrical use on Farm C was from electric water heaters and fans. Farm D had a manure composting system which supplied bedding for cows and used 34% of the total electricity.

Lastly, Farm E had 37% electric use for milk cooling because of an electric heat pump, which removed heat from the milk for storage into a hot water tank for cleaning purposes. For all farms, lighting was also a significant user of total electricity.

Annual electricity use per cow ranged from 400 kWh per cow on Farm E to 1,145 kWh per cow on Farm B. On a kWh per hundredweight (cwt.) basis, Farm C had the least electricity per cwt. at 2.3 kWh while Farm A had the most electricity per cwt. at 4.5 kWh. The higher electrical use to produce milk at Farm A was likely because the dry cows were housed in the cross-ventilated barn with the milking cows. About 11% of the cows were dry cows on Farm A, and those cows used electricity but did not produce any milk.

Regular fan maintenance, proper fan control settings, location of fans, and energy efficient motors all could influence the efficiency of ventilation systems. Farms A and B did not have variable frequency drives installed on any of their fans.

Lighting use ranged from 7% to 19% of the total electricity use measured across the farms. This suggests there is potential to reduce energy usage by upgrading to more efficient lighting systems such as LEDs.

Other options for producers to investigate are renewable energy systems such as solar photovoltaic or small scale wind turbines. Renewable energy generation on-farm is one way to reduce reliance on fossil fuel-derived electricity while providing the farm revenue and decreasing electric costs.

Using an agrivoltaic system, which is the integration of solar photovoltaics and agriculture, could boost land efficiency up to 75%. Potential on-site renewable electric generation could also supply some or the entire electric load, allowing farms to approach net-zero (producing as much energy as is used).

The results of this study provide recent energy usage for farm energy benchmarks, agricultural energy policy, economic evaluations, and future research into dairy farm energy studies. The data will also be useful to producers who are searching for areas for reduced energy usage in their own production systems. Improving the efficiency of electrical components in dairy operations could provide opportunities to further shrink the carbon footprint of dairy production systems.

The randomness of reproduction
Reproduction E-Source
Related to:
features, cow comfort
In Features