A reset on calving ease

By John Cole     Sophie Eagle       Thomas Lawlor   And   Ezequiel Nicolazzi, COO, Council on Dairy Cattle Breeding
Cole is the acting research leader of USDA’s Animal Genomics and Improvement Laboratory; Eaglen is the international program director at the National Association of Animal Breeders; Lawlor is the executive director for research and development at Holstein Association USA; and Nicolazzi is the technical director of the Council on Dairy Cattle Breeding. 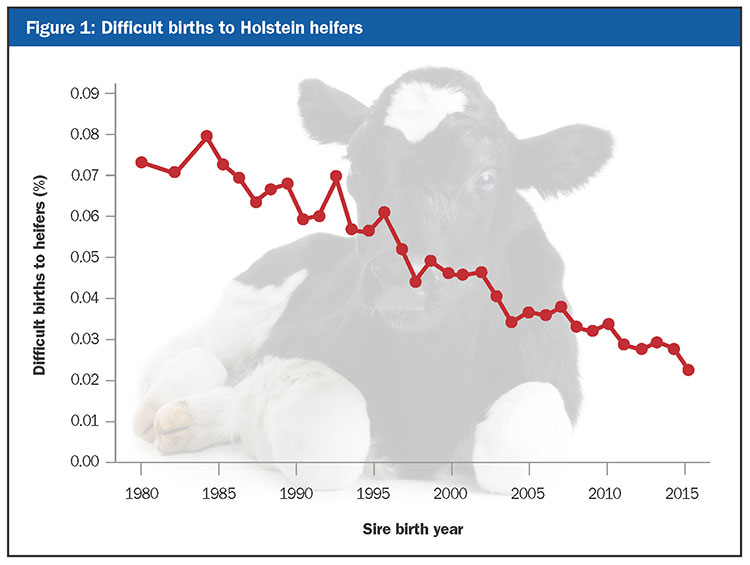 Calving ease evaluations have evolved immensely over the decades. When first released in 1977, 28% of heifers and 15% of cows needed help calving. That was according to joint research by Iowa State University and the National Association of Animal Breeders involving some 125,000 births in Holsteins.

In recent years, the predicted transmitting ability (PTA) for calving ease has been centered on phenotypic bases of 8% for Holsteins and 5% for Brown Swiss. Fast-forward to April 2020 . . . new genetic bases were adopted to account for selection gains over the last five years. Calving difficulty has been steadily dropping, so dairy producers were surprised to see higher PTAs for many familiar bulls this April. Some bulls had PTAs of 8% to 10%, but only averaged 2% to 3% calving difficulty on farms.

The word spread quickly after the April evaluations that there was a mismatch between the PTAs and actual rates of calving problems on most farms. Chad Dechow expanded on that notion in his May 25, 2020, Artificial Breeding column, “Calving ease evaluations shifted in April” on page 318.

This article explains the new phenotypic bases that will be implemented in August 2020. For brevity, we will focus on calving ease in Holsteins, and briefly comment on changes to Brown Swiss calving ease and Holstein stillbirths, too.

The rate of difficult births has diminished substantially as shown in the figure above. Better genetics and improved calving management have resulted in less dystocia and fewer stillbirths. Cows and calves are healthier, and producers obtain more realized income from investing in better genetics.

Variation in the data will decrease, too. In April, most Holstein bulls fell between 4% and 12% for sire calving ease (SCE) PTAs. This August, most Holstein bulls will range from 1% to 4% SCE. Similar changes will be seen for all traits in both Holstein and Brown Swiss, and there will be fewer bulls with extreme PTAs.

Changes to the genomic PTAs will be very similar. Reliabilities will remain the same because base changes do not affect the amount of information in the PTAs. The stillbirth base is changing from “all births” to “heifers calving for the first time” so that all calving traits have the same interpretation.

Adjustments to Net Merit (NM$) and other indices, such as the total production index (TPI), are needed to account for the lower spread among the PTAs. Both the overall emphasis on calving ability and individual PTAs for NM$ will change. The emphasis on calving traits in NM$ is likely to drop from 5% to about 2%, allowing more emphasis on other traits, such as cow health.

How will this affect individual bulls?

The bull rankings have always been correct, but the differences between bulls may change in August. In Table 2, the example bulls rank exactly the same on their April and August PTAs, but there’s a 0.7 point difference between Riveting and Rome in August where there was previously a 1.8 point difference.

Are calving traits a solved problem?

We have successfully controlled a situation that was problematic for many dairy farmers, but it does not mean we can be complacent. The genetic control of calving traits is fairly small (heritability of 3% to 8%), which means that sire selection, proper staff training, and care in the maternity pen are needed to keep dystocia and stillbirth rates low.

It remains important to select for animals with favorable PTAs for calving traits. If you have been using a hard PTA cutoff for calving traits, you can stop using that threshold to exclude undesirable bulls. Rest assured that selection on indices such as NM$ or TPI will ensure that the calving traits are properly accounted for.