Let all the cows drink 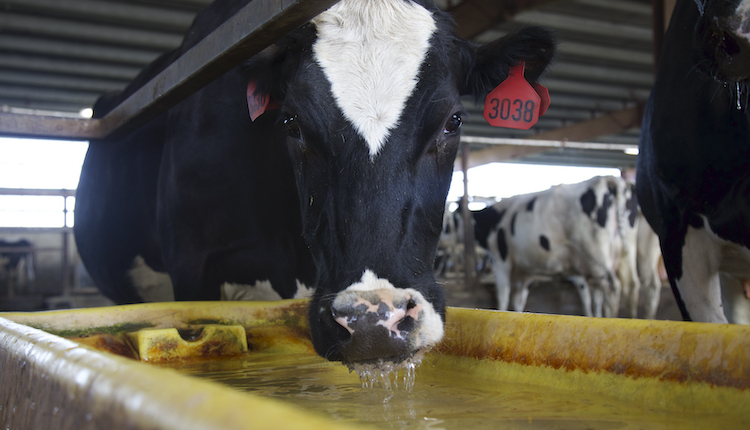 Water trough capacity can make or break how cows deal with the heat of summer, not only for milk production but also to maintain body functions. That water capacity encompasses the size as well as the number, location, and flow rate of waterers in a barn.

Penn State Extension educator John Tyson recommends that the total perimeter area available for drinking should allow 15% to 20% of a pen’s group to use the waterers at a time. On a per cow basis, this means providing at least 2.5 to 3 inches of drinking space. “Why use a small waterer if a larger one will fit?” he asked.

When evaluating water space, only take into account the perimeter of the trough that is accessible to cows and not blocked by walls, stalls, or other materials. Water access less than 2 inches per cow can present welfare and production problems. In fact, an experiment in Norway found that when cows’ water access is limited to less than about 3 inches of water trough space, older cows especially can drop significantly in milk production. “Higher parity cows produce more milk and seem to be more sensitive to water access,” the researchers wrote.

Within a group, provide at least two watering stations so that a single boss cow can’t prevent others from drinking. More waterers will likely be needed, as Tyson stressed that cows should be within 50 feet of water at all times.

When planning for the location of waterers, keep in mind the most efficient and desirable cow flow, for both the animals and the handlers. A study from Kansas State University evaluated the use of waterers at different crossovers in the barn and found that the most water is consumed at middle crossovers, which must also be wide enough for cows to pass behind. Of course, water should also be offered near the parlor exit if possible.

Properly sized and located waterers won’t be useful if they aren’t kept full of fresh, clean water. He advised setting each waterer’s “recharge rate” at 6 to 10 gallons per minute, depending on the season and usage.

Regular cleaning must also be conducted. Try mounting brushes on walls near a waterer to provide easy access for employees to complete the task, Tyson suggested.