A study of small- to medium-sized dairy farms revealed certain strategies that led to more profit per cow.

By Joleen Hadrich And   Amber Roberts
The authors are with University of Minnesota Extension. Hadrich is an associate professor and extension specialist, and Roberts is an extension educator. Funding for this work was provided through USDA-NIFA 2019-68006-29333. 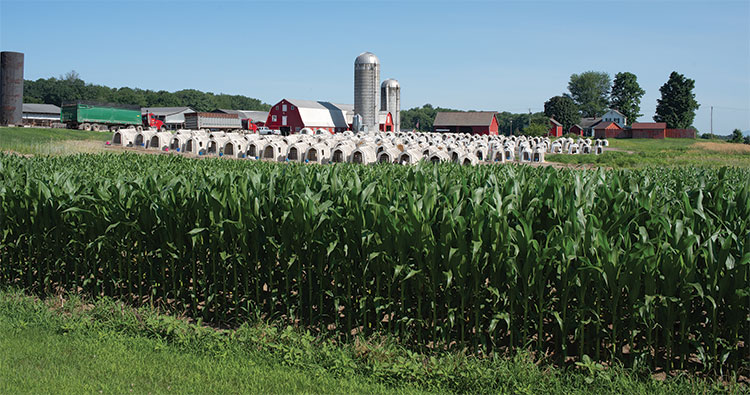 The ability to endure and recover from fluctuating milk prices is a strong indicator of farm success.

As dairies face low milk prices, their ability to endure and recover from volatile conditions is more important than ever. This has certainly been true for the dairy industry from 2015 through mid-2019, and most recently, in the second quarter of 2020. Dairy farmers overwhelmingly want to stay in business, but tight profit margins make this challenging.

Over the past 18 months, a unique dataset at the University of Minnesota was created. It combines animal health, production, and farm financial data to assist dairy farms in creating more financially sustainable operations. In all, 87 Minnesota dairy farms across 29 counties agreed to share their Dairy Herd Information Association (DHIA) and farm business management records from 2012 to 2018.

Financial resiliency was defined using the adjusted net farm income ratio. Specifically, we calculated the proportion of profits the farm was able to retain from revenue generated by farm production after farm expenses were paid.

Using this measure, we annually ranked the 87 farms against each other from 2012 to 2018. Then we identified resilient farms as those that ranked in the top 25% for the majority of the years of the study. Using this criterion, 24 of the participating farms (28%) were categorized resilient. We then compared the characteristics of the 24 resilient dairy farms to the remaining 63 farms, which we term “non-resilient.”

The milk price used in this study is calculated by dividing total milk income by total milk sold. It does not include government payments, cull sales, or other revenue adjustments. While we do not have detailed information on milk premiums received, they are included in the milk sales total.

Resilient dairies appeared to be proactive in receiving milk premiums and/or using marketing strategies to improve their milk price to counterbalance lower milk production. An important caveat to this point is the farm having a viable market to sell their milk. 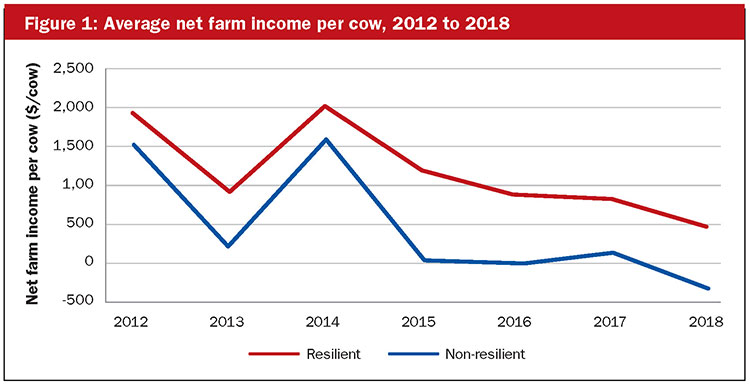 We looked more closely at the cow level data to identify strategies used by these farms to retain profit. First, we observed resilient farms were able to be more responsive to milk price changes with their input purchases while the non-resilient herds were not.

The average age of the principal operator on resilient dairy farms was 43 years old, which was 10 years younger than non-resilient farms. These farms also placed a greater emphasis on educational opportunities. Participation in the Minnesota Dairy Initiatives (MDI) program was used as a proxy for additional education. MDI brings dairy producers, veterinarians, nutritionists, lenders, and other agricultural professionals that support the dairy together as a professional team to identify goals for the dairy farm and find ways to achieve them within their current budget.

The main lesson we learned from this project was that even though resilient dairy farms may not have the highest milk production per cow or net farm income on a pure dollar basis, they were able to retain a larger portion of the milk sales they received as profit. This is more than likely due to the combination of financial and cow management strategies they used to mitigate downside risk.

As farms continue to work through exceedingly tight margins, farm managers must identify what they want to measure as success for their farm. Then, they can continue to build and fine-tune their skill set to achieve their goal.

Mixing it up in the semen straw
Features
Related to:
features, economics
In Features