Make robots work for your cows 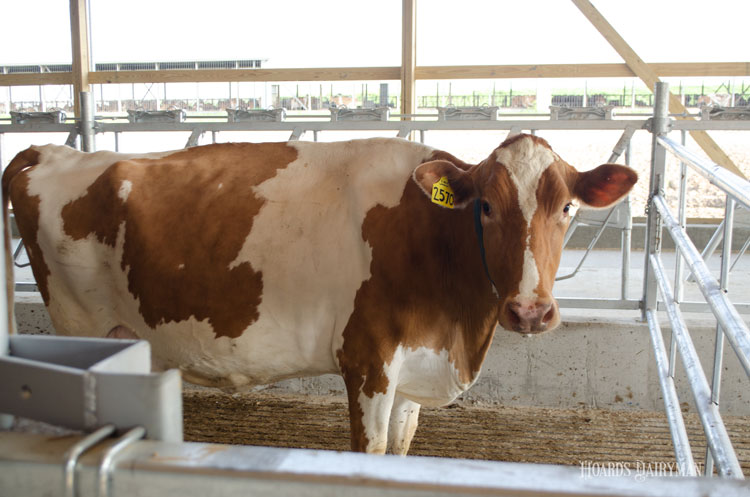 Automatic milking systems continue to grow in popularity as they provide benefits in improved cow health and more behavioral freedom, detailed Trevor DeVries of the University of Guelph. However, just as these barns provide new opportunities, they may present unique challenges to reaching those benefits. In a Virtual Dairy Nutrition and Management Series presentation, DeVries identified how to overcome a few of those roadblocks to achieve effective robot behaviors.

Can’t get milked
If cows can’t reach the milking unit when they want to, the entire premise of the robot system is disrupted. Barn design and barn density affect a cow’s access to being milked.

Robotic dairy barns are generally set up in a free-flow layout or a guided layout to either feed or milk. In a feed-first, guided-flow barn, a cow must move through the robot, either to be milked or to be released, to reach the lying area from the feedbunk. A milk-first, guided-flow barn directs the cow through the robot space from the lying area before it can access the feedbunk.

A free-flow barn has no such restrictions and allows the cow to access the robot, feedbunk, and lying area whenever it wants. DeVries described that any of the systems may work well. “For the most part, the success in those systems comes down to how the cows are managed,” he said. “There’s really no conclusive evidence in terms of which system is best from a cow behavior and milking visit standpoint.”

Each system has its own challenges. DeVries presented that if management is not optimal, guided-flow cows may eat fewer meals and be subjected to longer wait times at the robot. Free traffic barns see a slight increase in milking visits, but farmers will be at greater risk for fetching cows. “The question becomes, whose behavior is easier to manage, cows or farmers?” DeVries asked.

Cows may also not be able to reach the robot when they want if the barn is crowded. DeVries noted that most studies have found that cow numbers in the high 40s to low 50s per robot work best. There is also no evidence to suggest that feedbunk density can be reduced even though not all cows will be eating at once.

Some cows won’t get milked
Lame cows that don’t want to visit the robot can be a serious problem in automatic milking barns. These cows are 2.2 times more likely to be fetched, with fewer robot visits and less milk produced. DeVries found that, in general, moderate lameness isn’t any more or less common in robotic herds than conventional ones, but there is a very low prevalence of seriously lame cows on robotic farms.

The same factors contribute to lameness in a robot barn as in a conventional barn, DeVries pointed out. That means lying time, standing time, stall size, or bedding material could all create issues.

Getting feed
Besides being milked, cows in a robotic barn must have access to the partial mixed ration when they want in order to meet their dry matter needs and daily time budget. This includes regular bunk practices such as providing enough space and keeping feed pushed up.

DeVries also noted that peaks of milking activity often follow the pattern of when feed is delivered. If feed can be kept pushed up and available regularly, the milking system will likely be used more consistently, shortening wait times for cows to enter the robot.