How do we maintain consumer confidence?

The public’s perception of animal care influences their purchasing decisions and the way they vote on regulations. 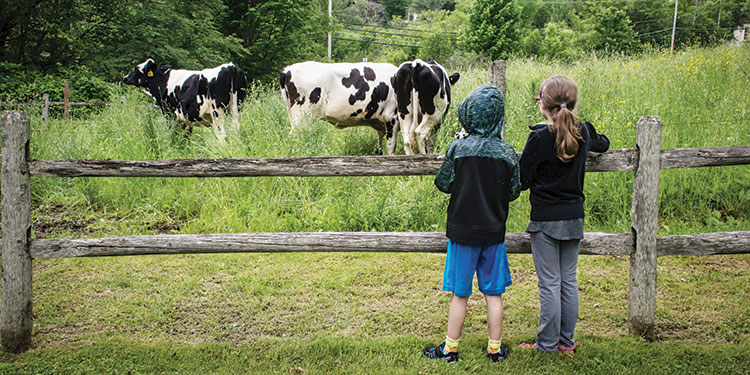 farm tours may have varied effects on the public’s perception of farming, but they bring opportunities for us to highlight shared values around animal care.

The vast majority of our country’s population is several generations removed from farming. Most people are unfamiliar with modern production practices, yet dependent on agriculture and the food supply chain. Nonetheless, consumers today have a great deal of choice. When certain practices do not align with people’s expectations, they may choose to not consume dairy products or turn to alternatives.

Animal care is a key topic that affects how consumers view their food choices. That means animal welfare is critical to the dairy industry’s ability to maintain its “social license” and consumer base into the future.
Many consumers want to be confident their purchases don’t conflict with their values. Analysis of more than 40,000 survey responses from U.S. consumers showed that although most people prioritize price, safety, taste, and nutrition when buying food, they also put animal welfare ahead of other factors, such as convenience, environmental impact, and labor fairness.
Science to inform policyHow should the dairy industry address public concerns about animal welfare and maintain consumer confidence? This is where both the natural and social sciences can play a key role. For example, researchers focusing on the biology and behavior of animals provide invaluable insights into what cattle need and want to have a good life.
Social science is also needed, however, to understand the attitudes, expectations, and values of important dairy stakeholders, such as producers, veterinarians, and consumers. Sustainable policy recommendations will depend on solid research from both areas, conducted using rigorous, validated scientific techniques.
There is a large amount of data showing sizable majorities of Americans are either somewhat or very concerned about how food animals are treated. Research also reveals people can think or behave differently about these matters, depending on whether they are wearing their “consumer” hat or their “citizen” or “voter” hat. People are often more willing to take an action, like voting for a regulation, than putting their money where their mouth is.
Over the past two decades, at least seven states have passed regulations on farm animal care, mostly having to do with housing and allowing the animals to have greater freedom of movement. In states where citizens voted directly on these laws through ballot initiatives, 55% to 78% voted in favor of such regulations.
Not sure who to trustWhy would people want more regulation of farm animal care? Part of the issue is the public knows very little about the details of dairy farming, and very few indicate they have reliable sources of information on animal welfare.
Related

There are new guidelines for feeding calves
Dairy Calf & Heifer
Related to:
features, consumers
In Features