We started the pandemic thinking milk production would need to be cut somewhere between 3% to 10% to bring supply into alignment with the weaker demand. After some initial cuts, milk production has surged higher, with production in the fourth quarter up 3% from the previous year. But maybe the most surprising statistic is that the dairy cow herd has expanded more in the past six months than we have seen at any point since at least 1998, and probably longer.

Double the typical pace
We have added 93,000 dairy cows to the U.S. dairy herd between June and December 2020. At six months into an expansion, the herd is usually up just 55,000 head. (Graph 1) Why has the herd expanded at almost double the normal pace? 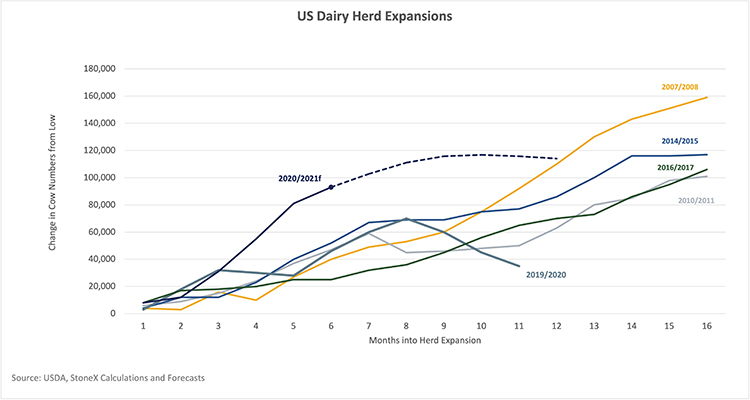 One possible explanation would be direct government payments to dairy farmers. While the exact payment per hundredweight (cwt.) depends on how large the farm is, my weighted average payment works out to $2.14 per cwt. from the two rounds of Coronavirus Food Assistance Program (CFAP) payments during 2020. That is an 18.4% boost to average farm gate margins for the year. However, even with the government payments included, margins fell short of the highs in 2008 and 2014 that sparked other large gains in the U.S. dairy herd.

If you look at the herd expansions regionally, almost all of the growth has been in the central U.S., from Texas all the way up through the Upper Midwest, with the herd basically unchanged along the coasts. (Table 1) We produce a lot of cheese in Texas and New Mexico as well as the Upper Midwest, which made me think that maybe the record-high cheese price is boosting production in those areas. That might be true, but I’m having a hard time finding statistical evidence for it.

About 40% of the milk in the Pacific Northwest and Southwest goes into cheese (Class III). However, cow numbers are up just 2,000 head in the Pacific Northwest, while the Southwest numbers are up more than 30,000 in the past six months. But I still think cheese returns, relative to butter and nonfat dry milk (NFDM), have probably played some role in where the expansion has been regionally.

Regional supply controls (base/over-base pricing programs) and new plant capacity are probably also playing a part. Some processors in the Pacific Northwest (and I believe Northeast) have kept supply controls in place since last spring, while farmers in the central U.S. have largely been free to produce as much milk as they want.

Some of the growth may be driven by increased processing capacity, the biggest being the new cheese plant in St. Johns, Michigan. That may be contributing to the herd growth in Michigan, Indiana, and Ohio. Expanded cheese capacity in South Dakota may be boosting cow numbers in South Dakota and Minnesota. The enhanced plant capacity in the region should be beneficial for Wisconsin farmers too, but oddly, the herd in Wisconsin is only up 3,000 head.

No clear answer
I don’t think I have a complete answer on why the herd has expanded by so much and why the growth was concentrated in the central U.S. The more important question is, “What happens next?”

There was no direct payment to dairy farmers in the stimulus package that passed in late December and President Biden’s proposed $1.9 trillion package doesn’t have direct payments for farmers either. So that kills any direct incentive from the government to boost production.

We still have roughly $1 billion in announced or expected dairy purchases by government programs during 2021 (down from $1.325 billion in 2020). However, with the increased milk supply, the expected boost to milk prices from the purchases this year is much smaller than last year. Mix in the higher feed costs and farm gate margins don’t look great. They don’t look bad enough (yet) to cause a big drop in the size of the herd, but they aren’t encouraging expansion either.

If the herd expansion is to fill new plant capacity, there seems to be more than enough milk available across the country already, but there may still be some farms where they started construction last year and won’t finish (and populate the barns) until this year.

The 2021 outlook
So, it is hard to argue for a continued large expansion in the herd, but we probably have a few more months of growing cow numbers before the herd flattens out. That will put the herd up more than 1% from year-ago levels for at least the first half of this year. Long-run trend for production per cow is a little over 1%, so the larger herd locks us into something like 2% or greater growth for the first half of 2021.

But it’s possible milk buyers and cooperatives could put their supply restrictions back into place, or margins could turn out a lot worse than expected and we could get a significant adjustment to the size of the herd and production per cow in the first half of the year. Without some type of big shock, we’re likely locked into strong milk production growth for the next six months. 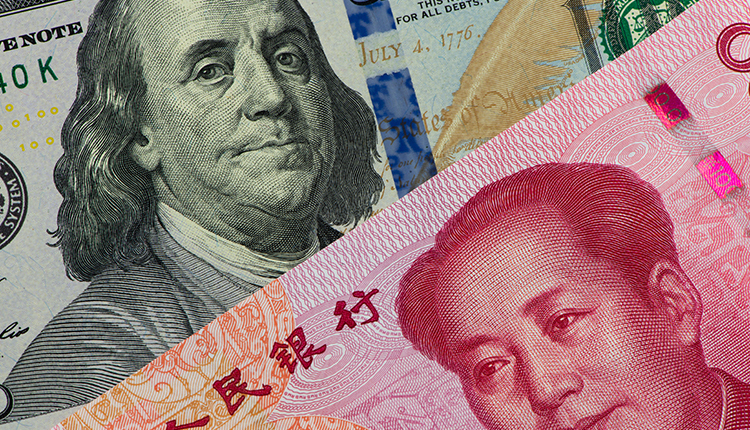