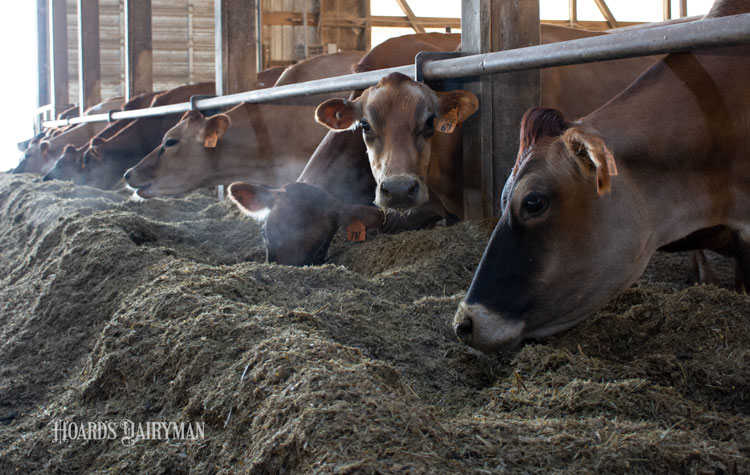 Although it might be entertaining to see cows running toward the feedbunk and eagerly start eating, this is also a sign that they’re hungry. Unfortunately, they might be so hungry that it’s a detriment.

“The reason why that can be concerning is that if cows do that too much, they’re going to consume too much feed too quickly,” said Trevor DeVries, professor and cattle behavior specialist at the University of Guelph. “That can then have a negative impact on the rumen environment.”

“Those large meals get digested fairly quickly, particularly the highly fermentable carbohydrates,” he continued during “Troubleshooting Herd Health Issues on Your Dairy-Feeding Behavior,” a Cornell Cooperative Extension podcast. “As a result of that, rumen pH gets potentially depressed, and with that, fiber digestibility gets depressed. Those things can then have a negative impact on passage rate from the rumen, overall digestibility, and even influence the risk of milkfat depression, so that’s potentially problematic.”

Factors to consider when troubleshooting feeding behavior include:

Stop the sorting
Management plays a role in feedbunk behavior, as farmers don’t have to just think about what feed animals consume, but also the manner in which they eat it. For instance, it’s important that the total mixed ration (TMR) is well-combined so they can’t completely sort it.

“Cows are pretty adept at picking through what they like,” DeVries said.

He cited data from studies that showed that when calves are weaned and fed grain and hay separately, farmers don’t always get the results they want.

“What we’ve found in some of that work is that when we feed calves that way, they tend to go to the feed bunk and consume all their grain fairly quickly, particularly if there’s any competition at the feedbunk, and then pick at the forage for the remainder of the day,” he said.

In their studies, they compared animal behavior in calves getting a mixed TMR and a nonmixed variation.

“So, we actually induced the learning of that slug feeding just based on how we fed those animals. Definitely, there is opportunity managing feeding early on in life to have a potential impact on the development of the carryover of these meal patterns and meal behavior patterns,” he said.