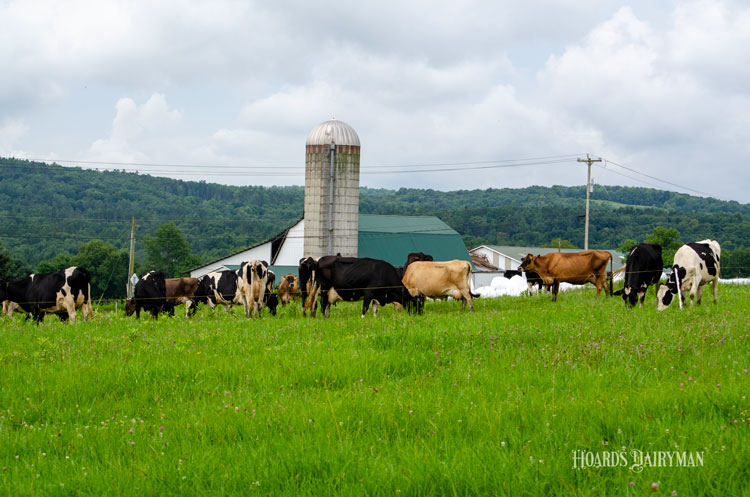 One of the beautiful things about dairy farming in the United States is the variety. There are a number of ways to milk cows and be successful. So, when the question, “What economic factor matters the most?” was posed to a panel of dairy loan experts during the February 17 Hoard’s Dairyman DairyLivestream, the conclusion was simple — it depends on the farm.

“Generally, you tend to stay in your band, but you can fluctuate between them,” Miller commented of data presented on dairy farm profitability by quartile. “Frankly, it’s only in a couple of areas. It’s in heifer raising costs, feed expense, to some degree equipment investment, and in the capital structure,” Miller went on to say about expense variables that impact a dairy farm’s profitability. In 2019, the top 25% of herds in the Northeast Dairy Farm Summary earned $925 per cow while the bottom 25% lost $325 per cow. In speaking of “band,” Miller made reference that farm income varies year to year; farms generally do not move too much between quartiles.

“Sam talked about how individual this whole analysis has to be, and it’s so true. The budget on one farm can be totally different than another,” explained Farm Credit East’s Roger Murray, who was alluding to similar comments made by BMO Harris’s Sam Miller.

Each of these factors can vary widely from farm to farm and region to region across the country. Throughout the course of the webcast, the commentators offered examples of economic areas that can exhibit such fluctuations from operation to operation. One of the examples offered by Cornell’s Chris Wolf was grown versus purchased feeds.

“We did some very detailed enterprise accounting studies where we looked at the dairy herd, the heifer enterprise, the corn enterprise, and so on and so forth,” he shared of a dairy farm data set developed at Cornell. “What we consistently found was that the forages paid for themselves all the time and the concentrates many years did not.”

Miller echoed those comments, “When you have high commodity and feed prices, you’re better off with homegrown feed than you are with purchased feed. When that situation is the opposite, then it can be more beneficial to buy everything instead of grown it,” said Miller. “Having some kind of risk management with some grown and some purchased tends to be the wisest plan on a long-term basis.”

“We look at them a little uniquely,” Murray said of organic dairy farms. “We look at their overall ability to manage and their cropping program because organic tends to be a lot more forage-based and grass-fed. Their ability to have consistent access to resources that way makes a big difference as well. To me, it’s a lot more about the management and location than anything else.”

Miller has seen similar impacts with farms that work with BMO Harris. He also noted that the organic market has less volatility because the price fluctuates less. That being said, the organic milk price has been pressured down as more production history came online in the last few years. “The real key on the organic side is where you can source your feedstuffs. Again, a lot of it tends to be local and forage-based,” Miller concluded.

An ongoing series of events
The next broadcast of DairyLivestream will be on Wednesday, March 3 at 11 a.m. CST. Each episode is designed for panelists to answer over 30 minutes of audience questions. If you haven’t joined a DairyLivestream broadcast yet, register here. Registering once registers you for all future events.