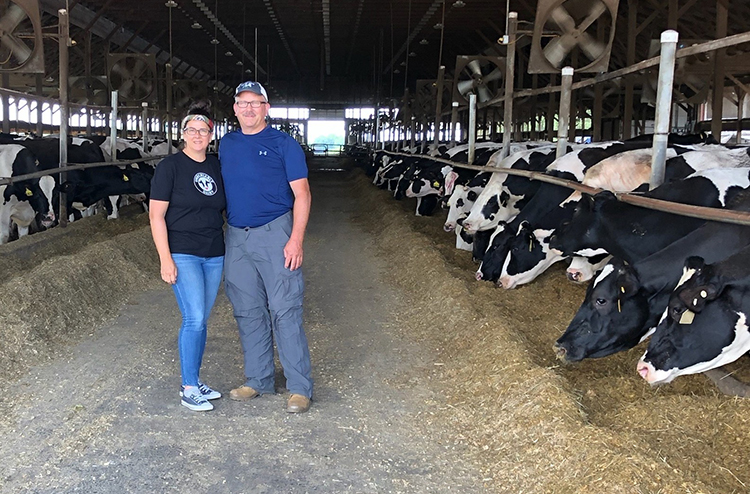 Trying to breed a better cow has been the continuous goal of dairy farmer Duane Hershey. For the past few decades, he has farmed with his wife, Marilyn, on Ar-Joy Farms, their Cochranville, Pa., dairy that has grown over the years to its current size of 850 head.

“I’ve always been intrigued by the registered Holstein business,” Hershey shared during a Center for Dairy Excellence Cow-side Conversations podcast. He said it always amazed him that a small herd could breed a cow or bull that could have an influence on the whole breed.

Traditionally, Hershey would purchase the best semen he could to use on his best cows, and two years later, he said they would know if they made a good decision once that animal entered the lactating herd. Since genomic testing came along, that waiting period has been removed. “We could speed up the process,” he noted.

The Hersheys employ a cherry-picking strategy when it comes to genomics, testing between 10% to 20% of their herd annually. They use a combination of genomic testing and Net Merit to detect genetically superior animals to flush or sell.

Hershey explained that he used to be of the mentality that they needed to raise every heifer born on the farm, but as the herd grew and reproductive efficiency improved, suddenly they had more heifers than cows. To cut back on the number of heifers they were feeding, they started to crossbreed lower-end animals and trouble breeders with beef semen.

“It’s time to get picky about what heifers you raise out of these cows if you have enough of them,” Hershey noted. They don’t test all their heifers, however, because they are doing some flushing and need quite a few animals for recipients anyway.

Genomic testing has also helped with their breeding program. When they transitioned from a tie stall barn to a freestall system, Hershey said they did not want to ignore type, but they had to breed for a little different type of a cow. They didn’t need cows that were quite as big, he explained, and they wanted them wider and to make as much milk as possible. “Genomics played a big part in that, and we are still learning,” he said.

Hershey credits genomics with helping continuously lower their somatic cell count, a priority selection criterion for Ar-Joy Farms. Hershey said he tries hard to not use any sires with a somatic cell score over 2.9. Additionally, he keeps a close eye on rump angle and teat placement when making matings.

“What’s important to me may not be important to the next guy down the road, and that’s okay,” he said. He also indicated that his genomic testing strategy would not be ideal for everyone, but it works for him. “If we sell one bull to A.I. per year or sell one heifer in a high-profile sale, that more than covers the investment we have in genomic testing,” he said.

His advice to other farmers looking to implement genomic testing is to first decide what they want to get out of it. “What’s important to you? Go after it,” he said. He also advised others to not be afraid to say no if a strategy or breeding program isn’t a good fit for their farm.

The beverage category is a tough one