Does your corn pass the silage harvest test? 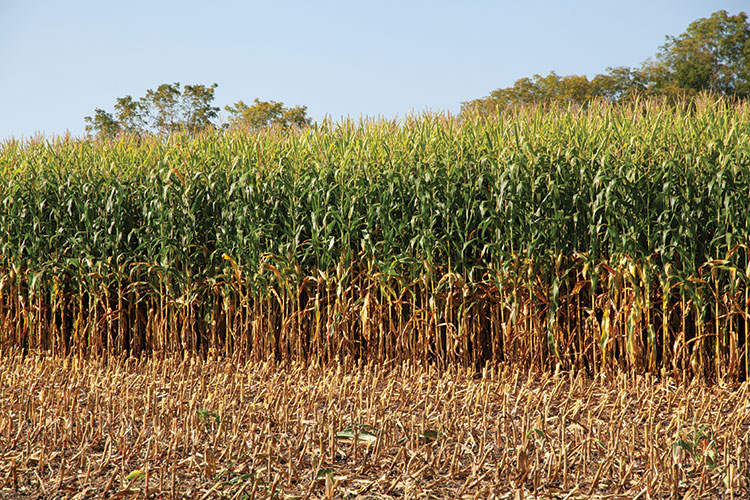 Corn must be ensiled at the proper moisture for optimum fermentation. However, determining whole plant moisture can be problematic.

To better determine a harvest date, we measured changes in ear and stover moisture content in standing corn and determined the number of plants needed in a sample to estimate field moisture content.

We began sampling both years at the milk stage of grain development. This occurred two weeks later in 2019 when compared to 2020, primarily due to late planting. Corn ears were removed from the stalk and kept intact, while cornstalks were chopped. Both were oven dried. Ear and stover moisture were determined and combined to assess whole plant moisture. 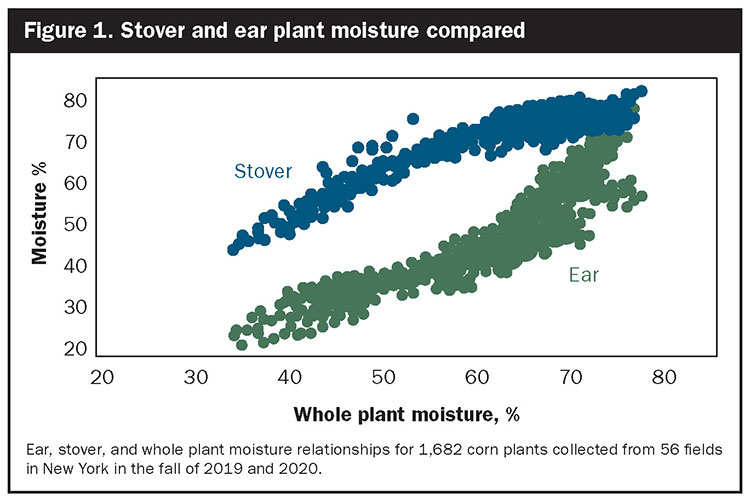 Early in the fall, ear moisture is similar to stover moisture, but the difference between the two plant components sharply changes until well past the optimum whole plant moisture (about 68% moisture) for initiating silage harvest (Figure 2). 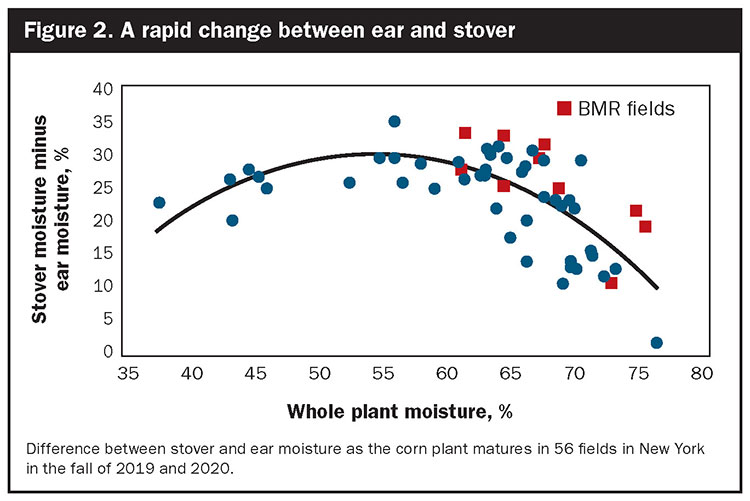 The black curved line in Figure 2 suggests that moisture content is equal for stover and ear at about 82%, and that eventually ear and stover will be equal again when whole plant dry down is complete. Ears lose more moisture than stover until whole plant moisture drops to about 57%.

Variability among fields. The variation among fields as shown in Figure 2 includes environmental variation as well as some variation due to corn hybrid genetics such as brown midrib (BMR) and stay-green traits. Ten of the fields contained BMR hybrids, indicated in red. Stay-green effects are difficult to assess, as one of the stay-green hybrids is simply a cosmetic version with little effect on plant moisture. However, it appears that most current corn hybrids begin ear dry down well before stover dry down.

Ten of our fields had between 40 and 50 plants sampled. If we assume that such a sample adequately represents the moisture content of each field, we can estimate how many plants are required to collect a representative sample for moisture determination. 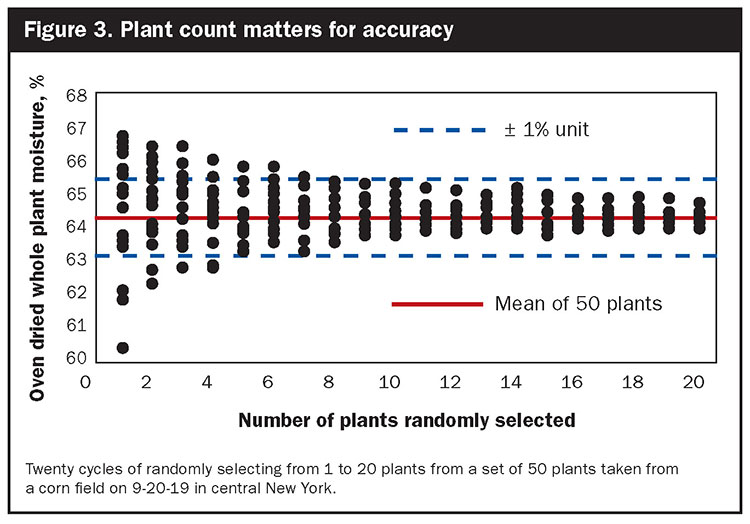 An example field with 20 cycles of randomly selecting from one to 20 plants is shown in Figure 3. A reasonable goal would be to collect a sample that is within plus or minus 1 percentage unit of field moisture 19 out of 20 times. This required between three and 16 plants per field for these 10 fields. One field was much more variable than the rest with a 13 percentage units moisture range among 50 plants sampled, likely due to uneven germination. The average number of plants required was seven. For nine of 10 fields, 10 plants were sufficient to average plus or minus 1% percentage unit of field moisture, while for six of the 10 fields, five plants were sufficient.

Estimating whole plant moisture is critical for optimum harvest timing for corn silage. The two major corn plant components, ear and stover, differ greatly in moisture content prior to harvest. Stover keeps almost all of its moisture until after the harvest season is past. It appears that most, if not all, current hybrids follow a similar pattern for ear and stover moisture loss.

For a cornfield uniform in appearance, sampling five to 10 representative plants (chopped and dried) is likely to provide a good estimate of field moisture. This estimate should be as accurate as chopping a short swath in the field using a harvester equipped with on-board near infrared spectroscopy (NIRS) equipment. In the future, we should be able to estimate corn whole plant moisture from an ear moisture determination. However, more research is needed.

This study was supported by the New York Farm Viability Institute.