The world opened before their eyes

Twenty years ago, a magazine advertisement for a dairy employee brought an international guest to a Pennsylvania dairy farm — and it opened the doors to trainees from around the world. 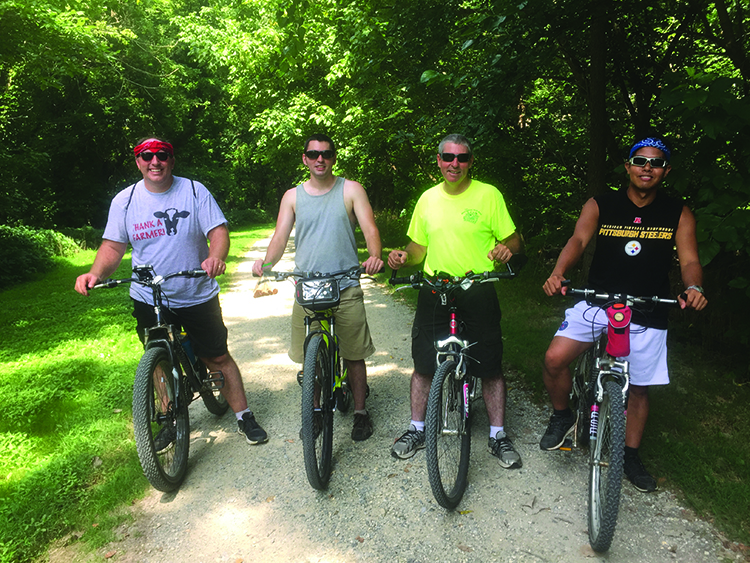 Both work and culture are important to the trainees at Diamond Farm. That’s why bike trips to Washington, D.C., are incorporated into the experience.

In 2001, Paul Diamond placed an advertisement looking for help on their dairy farm in southwest Pennsylvania. The gentleman who responded was from Argentina, a recent veterinary graduate looking for more experience on a dairy farm in the United States. He spent more than two years on their farm, eventually moving to New Mexico for dairy employment opportunities there.

Paul and his brother, Louie Diamond, operate Diamond Farm in Smithfield, Pa., a 125-cow dairy with 200 acres of corn and another 200 acres in hay. Their mother, Polly Diamond, is also on the farm and has opened her farmhouse to more than two dozen international dairy trainees since 2001.

After placing that first advertisement, the world opened before their eyes following a trip to World Dairy Expo. That’s when Louie connected with the international aspect of the event. Working first with Global Cow, and now with World International Student Exchange (WISE), he has hosted trainees from South Africa, the Philippines, Kenya, Uzbekistan, Peru, Argentina, and several other developing countries. Currently, two gentlemen from Tanzania are spending a year at the farm, gaining real-life dairy farm experience.

The two men, who are temporarily residing in the U.S. on a J1 (educational) visa, are both university graduates. Their roles on the farm include milking, cow and calf care, heifer management, and assisting with traditional “cowside practices” such as A.I., hoof trimming, and running a feed mixer.

Goals as large as the globe

“Every trainee who comes has a different level of experience and different goals they want to see from their time here,” Louie said, “but they all really want to improve their skills so when they return home they can have a better life.”

Each applicant goes through a screening process in their country, including a test of their knowledge and level of proficiency of the English language, both spoken and written. Louie said most of the farm’s trainees have a good grasp of English and can communicate; it’s the accents within a region or country that often pose the biggest barriers.

“Accents are hard,” he said. “We sometimes have to write things down and that helps get our messages across. But after training on the farm for a year, they usually speak English very well, even if they were limited when they arrived.”

When Louie reaches out to WISE about hosting another trainee, they send several applications for him to read and see who might be a good fit on their farm.

In the early years there was no communication between Louie and applicants before they arrived. Now, emails and Facebook messages allow them to send photos and information quickly and easily. Most of the trainees are in their early 20s and are recent university graduates.

The cost to come to this country on a training experience is substantial for a developing nation’s resident. “It costs about $5,000 for the entire process, so the individuals who come are committed to gaining as many skills as they can,” he said. “It’s a year-long commitment to be away from their families and their homes, so they are dedicated to learning about dairy farming.”

While they are in the U.S., Louie tries to take time away from the farm to travel with the trainees. Visits to local sites, historical properties, state parks, and even bike rides into Washington, D.C., all play a part in exposing the trainees to American culture. Louie said he always tries to fit in a trip to the nation’s capital since they are only 200 miles away.

“We try to take advantage of the off-farm stuff as well, from ball games to cow sales,” Louie said. “In 2020, we were unable to do that because of the pandemic, but our trainee went to church with us every weekend and went with me to several dairy promotion events, including milk drops for families in need.”

Every trainee is different, he added. While some are ready to share readily about their background, others are not that social. One individual went along to a dairy promotion event and ended up as the guest speaker, sharing about his own culture and lifestyle.

On the farm, Louie relies on the trainees to take ownership of the experience. For example, they make their own decisions about work schedules. Both of the current trainees milk together in the double-10 parallel parlor.

“I give them the ability to make decisions as long as goals are being met,” he said. “They are learning about our modern farm life experiences, something we take for granted in this country.”

He commented on one trainee from Uganda, who had two cows and was trying to decide how he could sell the milk to villagers. “For us, that’s an easy situation to solve,” Louie said. “For him, transporting milk meant carrying it on his bicycle, because he didn’t trust hiring anyone to drive the milk to the village because there was so much corruption.”

Once the trainee’s year-long learning experience is completed, they return home or occasionally travel to another country to work there for more experience. Louie said five of his former trainees worked in New Zealand because that country was looking for agricultural workers.

“We teach them the basics here (in the U.S.), and hopefully they return to their country with those skills,” he said. “In a developing country, if you have a certificate saying you have trained in the United States, that is a symbol of prosperity. The U.S. has great training opportunities that these other countries don’t have.”

The trainees who arrive at his farm are committed to gaining knowledge about dairy farming, he said, and are not here to have a working holiday. Louie provides meals and lodging and pays trainees a stipend. Most of the trainees save their money, spending very little while they are here, or send it back home to support their families.

“Many are saving up their money to buy their own farm,” he said. “These are go-getters — they wouldn’t be here unless they were dedicated to learning and improving their lives.”

Louie said the international aspect of farm workers has been enjoyable for his entire family. He likes teaching young people about not only the basics of dairy farming, but the most up-to-date technology as well. His mother, he said, enjoys having the trainees in her home. The young men are willing workers, eager to learn and apply their new skills to the day-to-day chores.

He admits sometimes he questions how they can apply the new technology in their home countries, given their limited circumstances.

“Then I remember we are opening doors to opportunities they might not have otherwise,” he said. “These young men want to go back and make better lives for themselves and their families, and they take what they have learned and apply it the best way they can.”

Reduced-lignin alfalfa can improve digestibility
Crops and Forages
Related to:
features
In Features

Features
Don’t power through a concussion