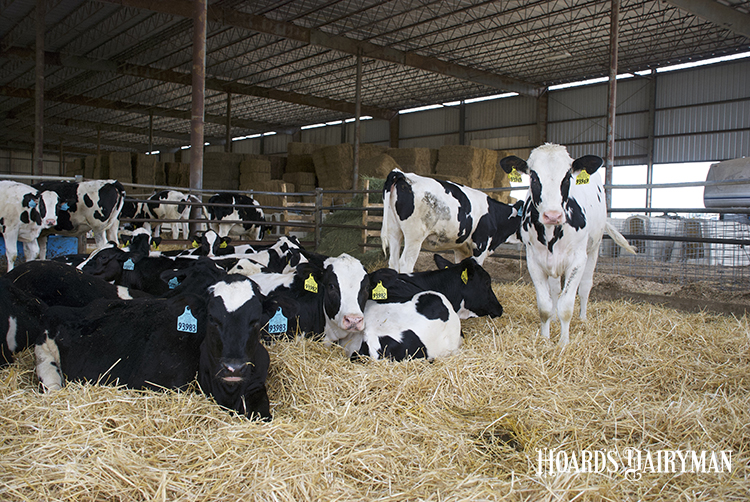 Housing calves in groups can sound like a jump into the deep end, far from the safe waters of individual pens long considered the standard to prevent disease transmission. But just as in the pool, proper technique and practice can make the unfamiliar possible.

Three farms that have worked hard to fine-tune their group housing strategies joined a panel discussion during the Western Dairy Management Conference. The best practices they shared will sound familiar to those that have raised calves in any system: cleanliness, ventilation, and good employees. In other words, don’t mess with the fundamentals.

That advice was delivered by Pam Selz-Pralle, who raises 300 Holstein calves each year in central Wisconsin in groups of four on mob feeders. Although her family found that building an automatic calf feeder barn would be too expensive, she still wanted the advantages of a facility that provided fresh air to the calves and would be easy to work in.

“The most important air is what’s 8 inches in front of a calf’s nose,” Selz-Pralle believes. So, they moved into a positive pressure-ventilated barn that provides a full air exchange every six minutes. This has drastically cut down on the pneumonia cases they previously saw with individual hutches, and Selz-Pralle said they are currently at less than a 1% treatment rate overall.

Rickreall Dairy in Oregon has also spent less on treatments since moving to a ventilated group housing barn with automatic feeder from wooden hutches, said Nate Kazemier. With more space per calf and an all in/all out system, calves are healthier and maintaining 1.5 pounds to 2 pounds of average daily gain. Age at first calving has been reduced by 85 days, and first lactation mature equivalent production has climbed 551 pounds, he continued.

The top concern of group housing for many people is likely the spread of disease, but clean facilities and equipment limit that issue just as they do in individual pens. Selz-Pralle explained that their mob feeders are cleaned after both feedings every day, including flossing the nipples to prevent as much contamination as possible. Though not every farm with mob feeders does this, she believes it’s a critical step of their system.

At Green Point Dairy in Michigan, calves spend their first five to seven days in individual pens before going to pairs until 20 days, then groups of four, and then groups of eight at weaning. The final step is one of two 50-calf transition pens. Brent Moyer admits that maintaining cleanliness can be a challenge with these transitions, but they have made improvements that have worked for their team. One tool he shared is his farm’s relationship with a nearby farmer to purchase corn cobs that are filled into a trench below the calf pens. The cobs are bedded with straw on top and retain much of the moisture produced in the pens. After each group, they’re cleaned out and replaced.

Both Moyer and Kazemier said they have essentially zero problems with calves cross sucking in the group pens, and Selz-Pralle has had very few. She recommended using restricted nipples to ensure calves are feeding for about five minutes. This will tire out their sucking need, she said.

Finally, an individual or team committed to calf health is still critical, especially when automatic feeders are used and people aren’t physically mixing and delivering milk to calves. The calf feeders must become calf managers to stay on top of animal well-being, growth, and care.

Moyer noted that a system like theirs may not work for everyone and will only be as successful as the people behind it. “You have to have the right people and the right team,” he said.

Dairy has no quick fix for labor shortfall
By Katelyn Allen, Associate Editor