Not only is it one of the largest metropolitan centers in the Middle East with its 5 million-plus people, but it could also be considered the pearl of the United Arab Emirates (UAE) as it ranks among the most dynamic, trendsetting cities in the world.

A new trend in Dubai is retailing more cheese from the USA.

Located in the heart of the UAE, one of the city’s largest retailers — LuLu Hypermarket — has tripled the number of cheese options from the USA. And with it, cheese sales on a value basis also skyrocketed.

It took hard work and a game plan to bring those sales about.

“At the moment there are 167 natural cheeses from the USA on those dairy shelves out of 300 natural cheeses,” said Firas Zahreddine in discussing the cheese sold in the Lulu hypermarket visited by a farmer delegation on a U.S. Dairy Export Council (USDEC) trade mission in early November. Zahreddine is shown on the right in the opening photo talking to USDEC Chairman Larry Hancock of Muleshoe, Texas.

“We have 54% of those shelves represented by USA cheese,” added the key account manager for USDEC. “This has been done with a strong partnership with LuLu hypermarkets (supermarkets). This partnership began through our USA Cheese Retail program,” said the marketing specialist with 21 years of work experience.

“We began by trying to understand the issues and bottlenecks that buyers were facing when it came to stocking American cheeses. Most of them will tell us, ‘U.S. cheeses are expensive, and there is not much awareness about it,’” he said of retailers’ perceptions of their customers.

“When we came to check about the prices, there were two issues. If you want to ship by air . . . and most buyers in the region do ship U.S. cheeses by air . . . the airfreight cost was almost double than that from Europe,” said Zahreddine of the region located far closer to Europe than the U.S. “Number two: we found that there are at least two or three layers between the retailer and the cheese producer in the USA. That may have included consolidators, wholesalers, or suppliers that are all adding to the markup of the cheese,” said Zahreddine, whose position was funded by state and regional checkoff programs, known as S&Rs, in the U.S. via “The Next 5%” initiative.

“Our Middle East marketing team brainstormed ideas to make this situation better. That’s when we came up with the USA Cheese Retail program,” he explained.

“If you buy USA cheese from our members, we will help you reduce the air freight (on a trial basis), educate your staff, educate your shoppers with in-store activities, and we will have merchandizers who will help fix your shelf displays,” said Zahreddine. “We will look after all the opportunities and obstacles related to U.S. cheese in your store and we will be your partners in any vital activity,” continued the Lebanese national who can speak multiple languages and easily communicate with others in the region to build relationships on behalf of U.S. dairy farmers and processors.

“When we pitched this idea, one of the LuLu team members in New Jersey said, ‘What’s the catch?’” recalled Zahreddine with a smile on his face.

To say the least, the LuLu team was quickly on board. 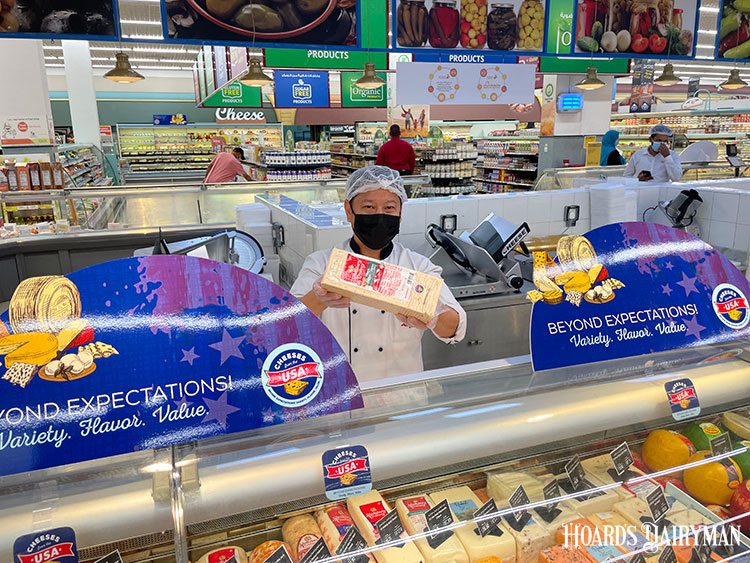 “Since we started working with LuLu in 2018, we expanded the stock keeping units (SKUs) from 90 to over 300 for USA cheeses between both the dairy case and the deli shop. We also increased sales from 60 metric tons to 120 metric tons. That equates to $1 million increase in purchases of USA cheese.”

People bring the partnerships to life

“Welcome to my second home,” said Loren Briones, shown in the photo, who works as a USA Cheese Guild Merchandiser. 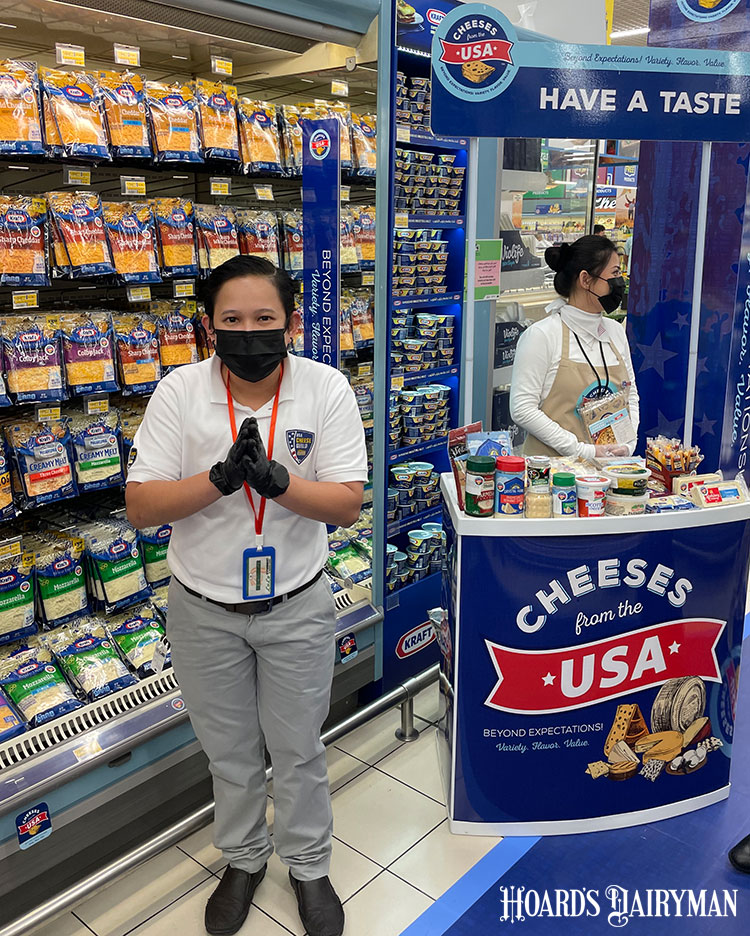 “In-store, I am the one responsible for the display and that all the cheese SKUs from the USA have their own facing,” Briones said with a smile as she pointed to displays in the LuLu hypermarket. “In many cases, the cheese had been getting displayed out of category and in other times the multiple SKUs get displayed on the same facing. When that happens, I am bringing the cheese out and giving each a single facing. Having the cheese displayed in the proper category helps consumers in purchasing decision,” said the Philippines native, who has been in the UAE since 2013.

“I also report all the movements I make to the store managers and staff,” she said of her activity in some 350 stores that have partnered in the USA Cheese Retail program.

“Equally important, I am making sure the price labels match the cheese. As I do that, I also make sure all the products are displayed first-in, first-out so that the freshest product is in the back. If I find any near to expire items, I pull the products,” said the USA Cheese Guild Merchandiser with two years of in-store experience in both LuLu hypermarkets and convenience stores.

With all this in place, the USDEC team added in-store promoters to ramp up consumer awareness.

“We developed a whole curriculum to train the promoters. This just got up and running in October,” said Zahreddine. “Before working in-store, the promoters learn about cheesemaking, cheese varieties, sampling and selling, as well as how aging affects the taste, texture, and color.”

Due to COVID-19, those working on behalf of USDEC cannot offer the equivalent of open-plated cheese boards in stores.

“We came up with the trick to make sealed-packed portion sizes,” described Zahreddine, who is a quick thinker on his feet. “This way the shoppers can taste it,” the people-pleasing leader added with a smile. 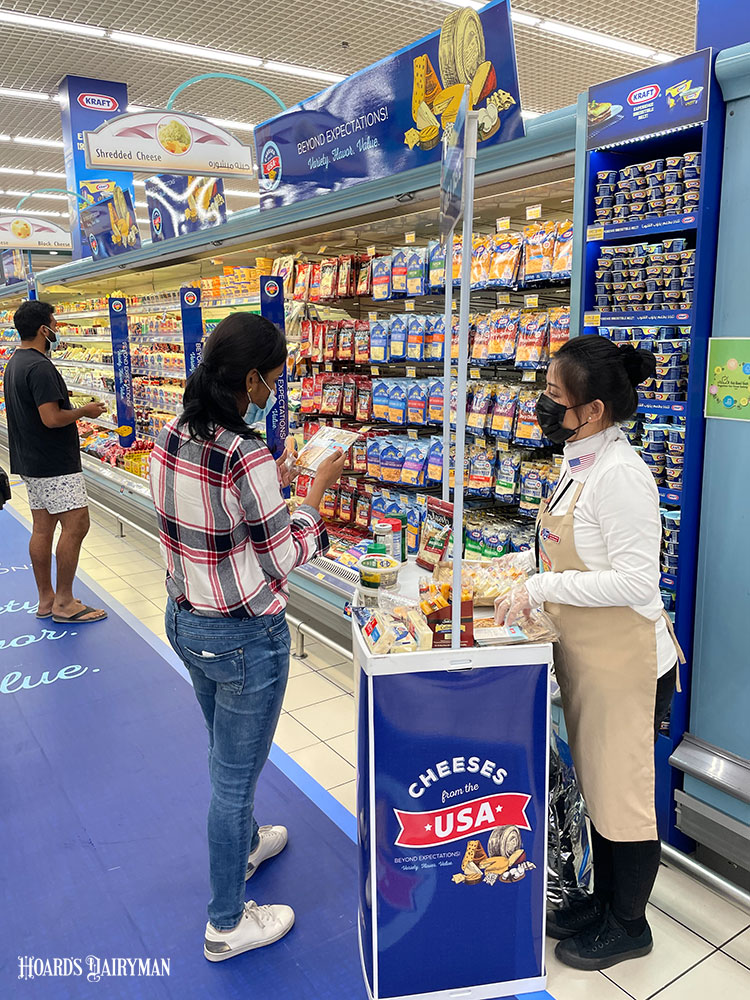 “The team that U.S. dairy farmers and USDEC members have working for them in this market is building a successful model for enriching U.S. dairy trust and sales,” said Alex Peterson, who was one of the U.S. dairy farmers on the trade mission. “I am very encouraged by the direction our team is going and the massive possibility for growth here in the Middle East and as ingenuity of our staff is replicated in other markets,” continued the Missouri dairy farmer, who also chairs the board of directors for the National Dairy Board, the nation’s dairy checkoff program.