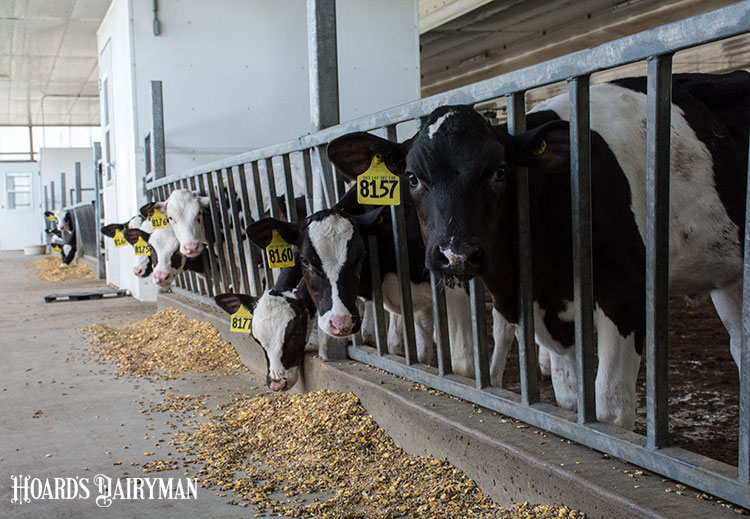 Once calves are weaned off milk, some may believe the hardest part of raising heifers is done, but that is not the case, according to Casey Havekes, a dairy management specialist for Cornell Cooperative Extension.

“Nutrition is equally important in the weeks and months following weaning to make sure calves are getting off to a good start,” she noted during a Cornell Cooperative Extension “Healthy, hardy heifers!” webinar.

Havekes said the goal is to have healthy heifers that achieve optical growth to calve between 22 and 24 months of age. In order to meet this goal, heifers must reach puberty in a timely fashion, with a target breeding age of 12 to 14 months and 770 to 880 pounds.

Besides body size, nutrition also aids in mammary growth at this age. “Nutrition remains very important postweaning because mammary development occurs at a faster rate than any other organ during this time period, and it is heavily impacted by what the heifer eats,” she explained.

“After weaning, the goal is that heifer development continues with the objective of achieving high rates of protein/muscle gain and low rates of fat gain,” Havekes continued.

Average daily gain during this period is dependent on an individual farm’s target age at first calving. As a reference point, Havekes noted that the recommended average daily gain for Holstein heifers from birth to breeding is 2 pounds per day.

If heifers are fed too much energy, it can cause reduced epithelial cell proliferation, more deposition of adipose tissue in the mammary gland, and later in life, lower milk production. On the flip side, shortchanging energy and nutrients can lead to poor growth, delayed puberty, delayed breeding, and delayed age at first calving, resulting in negative economic consequences for future performance.

To achieve the desired average daily gain, Havekes said calves should be eating about 85% of their dry matter intake as solid feed at weaning. While it is tempting to replace some of the more expensive grain or starter fed to recently weaned calves with corn silage or other fermented feeds, Havekes cautioned against that.

“Rumen development is still occurring at this time, both in size and microbial populations, so this is not the time to be introducing fermented feeds,” she said. She advised waiting until at least 3 to 4 months of age, and preferably 6 months, before feeding fermented feeds. Then, slowly incorporate the fermented and fiber ingredients into the diet in a way that reduces the likelihood of sorting.

To maximize the nutrients in the ration and ensure heifers are eating the diet intended for them, she said to reduce competition by limiting stocking density in the pen and ensuring adequate bunk space. She also recommended keeping feed in front of calves with frequent pushups to avoid slug feeding.

Heifer raising expenses can represent up to 25% of a dairy’s operating costs, and Havekes said that 50% of that is related to nutrition. That means both financial implications and animal development are reasons to ensure heifers are fed a well-balanced diet.