Rightsizing repro with steers and IVF 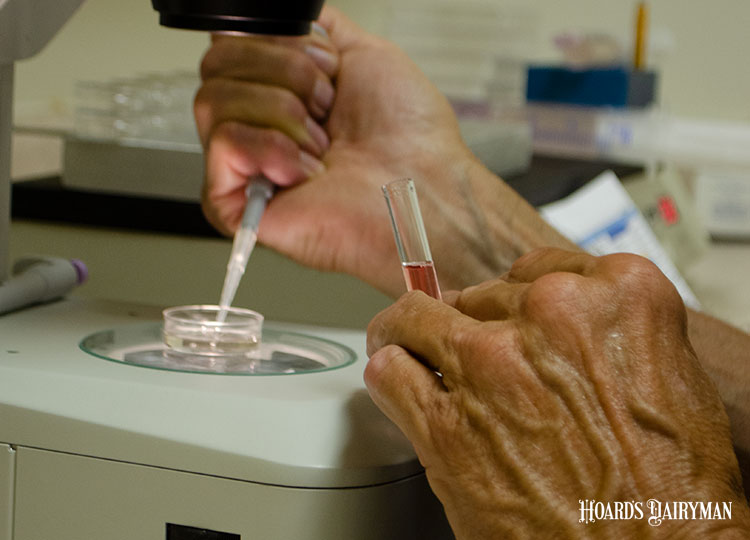 Some could argue that the upward trend in reproductive efficiency achieved by U.S. dairy farms started around 2009 with the advent of genomic testing, giving us more information about our animals. Others might believe it to be closer to 2006 when sexed semen came on the scene and allowed us to produce more heifer calves.

Paul Fricke of the University of Wisconsin-Madison pinpoints the shift further back to the year 2000. At that time, average days open in the U.S. had been climbing since 1955 as farms selected for other traits. Average pregnancy rate was 14%.

“Then, we had a reproductive revolution,” the professor and extension specialist of dairy reproduction said during the Western Dairy Management Conference.

Ovsynch had been introduced in 1995, and timed A.I. programs really began to take off, Fricke said. Along with wider access to and adoption of automated monitoring systems, more cows were found in heat and service rate rose across the country. Fertility improved, and with more cows calving in a timely manner at a healthy body condition, the cycle of good fertility was able to continue. For the first time, farms had too many heifers.

Different dairies have dealt with this situation in different ways, and Fricke moderated a panel including two dairy farmers that have taken opposite approaches to creating useful calves.

Many farms have adjusted by using beef semen to produce calves that bring more value at the sale barn. Darlington Ridge Farm in Wisconsin steps up that strategy to another level by using sexed male beef semen on all first services for the nine months out of the year the weather is not extremely hot or cold.

Owner Katie DiGangi explained that the farm is focused on making the best beef cross calves possible since they retain ownership of the animals to sell at 400 pounds. They are grown in Texas after leaving the dairy at one week old. Since beef heifers take longer to feed out than steers, the cost of using sexed beef semen pays off, DiGangi said.

The 3,700-cow dairy genomic tests all animals and has not used any conventional semen in about four years, she continued. With overall conception rates consistently around 45% or above, the breeding plan allows them to home in on the genetics they really want in their herd and create value from the others.

Arizona Dairy Company in Mesa, Ariz., also focuses on the genetics they want to build their herd, thought their strategy involves utilizing in vitro fertilization (IVF). The 6,000-cow dairy has an IVF lab on site, which is operated every Monday and Wednesday and collects about 40 animals each week.

“My ultimate goal is to not use any semen on my dairy,” said owner Denton Ross of his approach to transferring pregnancies into animals.

They believe in creating detailed matings that result in valuable embryos. Some genetics are sold, but most embryos become the farm’s replacements, which are all raised at the dairy. And even in the heat of Arizona, they have seen favorable results. Most embryos are transferred fresh into cows in a natural heat, while the rest are frozen. Ross explained that pregnancy rates have been better than with semen, especially in the summer. And there is low embryo loss, with upward of 92% of pregnancies carried to term, he noted.

Though creating replacements and bringing cows back into production are central to every dairy, how that happens can take multiple forms. On some farms, gone is the day when every heifer calf needed to be raised and rearing costs were only recovered once an animal entered the milking herd. Streamlining replacement herds to make the most valuable animals possible may be the next reproductive revolution.