One farmer’s tips for planting green 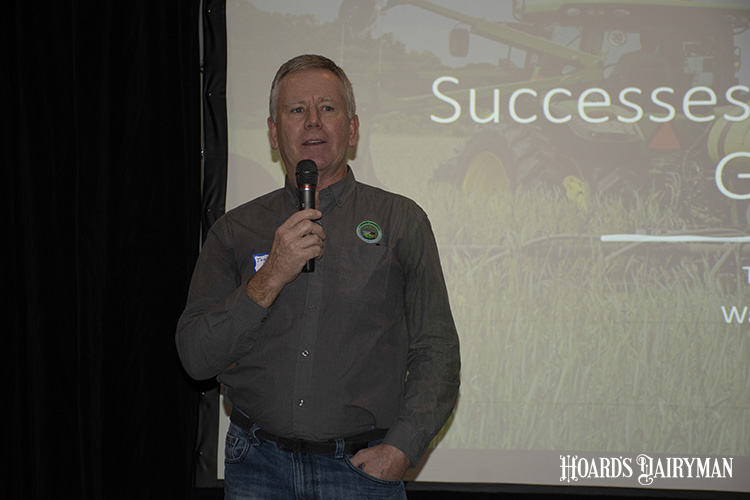 Planting a grain crop like corn or soybeans into a growing cover crop is a practice that is gaining popularity. For dairy and crop farmer Tony Peirick, “planting green” is a concept that he has fully embraced.

In addition to his own experience on their farm, as chairman of the farmer-led Dodge County Healthy Soils and Healthy Water watershed group, Peirick talks with many farmers who are utilizing conservation practices on their land. During the Yahara Pride Farms annual meeting, Peirick shared his advice for farmers who want to try their hand at planting green.

He said the simplest cover crop to start with is cereal rye. Plant it in the fall, after corn or soybean harvest. He shared that they have planted as late as December and that it can be planted on frozen ground.

In the spring, plant corn or soybeans, and then a week later, terminate the rye. If it is a dry spring, Peirick said termination should occur right after planting or the cereal rye will use that limited moisture.

One benefit of planting green with cereal rye is that it helps with weed suppression. “It is surprising over the years how much weed pressure we don’t have any more. We get by with a lot less chemicals,” he shared.

He pointed out that cereal rye does take up a lot of nitrogen, so when planting corn into growing cereal rye, be sure to apply more of the nitrogen earlier in the season. Later on, the nitrogen will be returned to the soil when the rye decomposes, so more nitrogen is not being added to the system – the application is just moved forward.

He also said it makes a farm more resilient to the weather and more profitable. They can get into fields and plant earlier in the spring, and he estimates they save close to $100 per acre due to reduced passes over the field for tillage and chemical application and lower machinery costs.

Peirick recommended working with a neighbor or extension agent who has some background in this practice to help get started. When his farm first began planting green, he said a lot of people told them it couldn’t be done. However, several years of trials on their farm have shown a 5-bushel yield increase in fields that have had covers and were planted green.

“There are benefits to it, from soil structure to everything down the road,” he said. “It’s a great way to help soil health, get the soil biology going, and make use of the nutrients.”

As you can tell, Peirick is a true believer in planting into a growing cover crop. “Planting green 100% is the way we are going,” he stated. “It does work, and we haven’t seen any negatives yet. The goal is to have living root in soil 24/7.”