Data review is a must for this dairyman 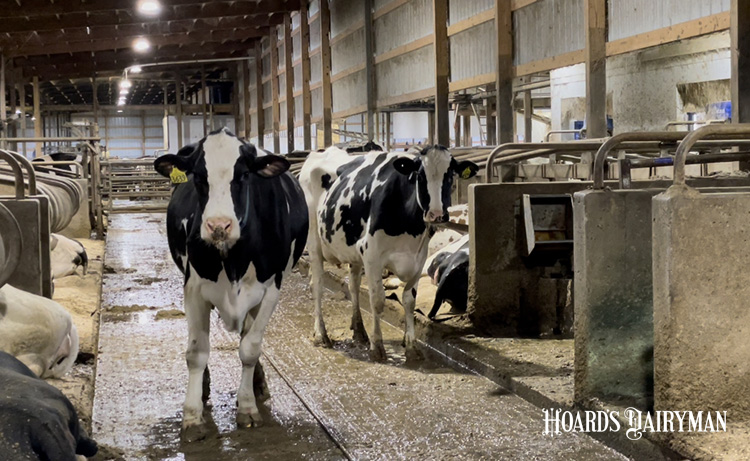 The day-to-day tasks of a dairy farm can be enough to fill anyone’s plate. Paired with the physical work, though, is a need to evaluate and utilize whatever data is available to best manage the herd.

“I use data to replace the human element that was present in the barn when we milked conventionally,” he shared during a University of Wisconsin-Madison Extension “Five Minute Farm Focus” video. Without people in the barns watching for lame cows or people in the parlor checking for mastitis, Diederich now relies on data from their robots and activity monitors to monitor cows.

Diederich, who farms with his parents, Raymond and Debra, and his wife, Sarah, said that data gives them early warning indicators of cows that are becoming sick or those that have not transitioned well after calving. They also use that data to find cows that are entering a lameness event.

“In a robotic setting, lameness is crucial to control,” he noted. “On any dairy, it’s one of the main drivers of a cow’s ability to eat and milk, so no matter what, it matters.”

He said one of the challenges with all of this data collection is that many people don’t know how to utilize it. He noted that their robotic data doesn’t sync with their other systems on the farm, and that makes it more difficult to integrate and utilize to its full potential.

His recommendation to other farmers is to involve outside consultants to help interpret the data. His work with a University of Wisconsin-Madison Extension program helped him better organize data and create meaningful insights on managing cows.

“In our system, it’s not just milk production that matters. It is time spent in the robot and how the cows flow through the system,” he shared. “I can have two cows milking 75 pounds. One can be profitable for me while the other one is not because that cow takes too long to milk and requires too much individual attention in a system that is designed around eliminating that individual attention.”

His advice to other dairymen is to embrace the use of data.

“Data is only useful if you do something with it,” he said. “The biggest thing you can do is to spend the time on it. It’s not something you can push aside.”

Diederich recommended that data review become part of a manager’s daily farm routine, just as one would check over cows or make sure there is fuel in the tractor.

“It’s something you need to do to have a well-run operation,” he concluded.