The world’s most productive cows emerged from resilience

This country’s focus on genetics, data collection, and heat abatement led to the world’s highest average milk yield per cow.

By Michele Ackerman
The author is a dairy and agricultural writer based in Columbus, Ohio. 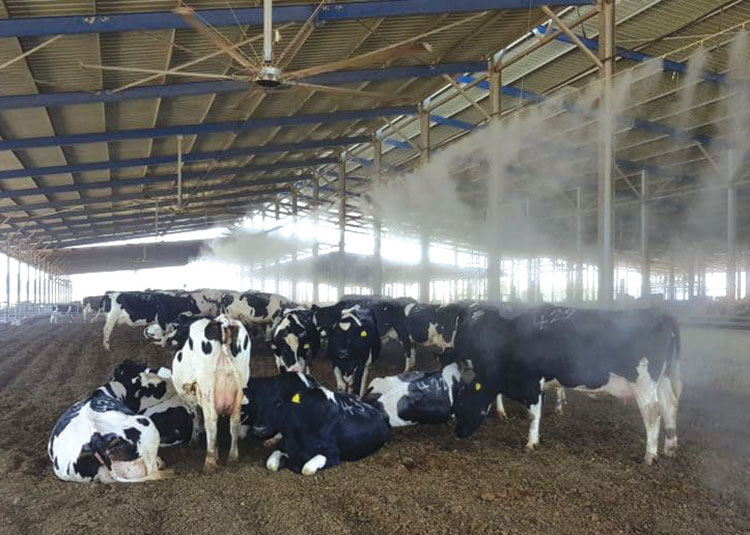 To help mitigate extreme heat, ventilation is provided by large, slow-moving overhead fans. Misters help provide evaporative cooling in the dry, desert climate.
If our collective experience with the pandemic has taught us anything, we have learned that resilience matters. With resilience, we can forge rivers in deserts. With resilience, we can create masterpieces from what we are given.

For one very small country known more for creed than cows, resilience and an innovative spirit have helped it achieve an enviable title: home of the world’s most productive dairy cows.

This country, Israel, has led the world in annual per cow production since the 1990s. Today, the 115,000 cows in the national herd produce 26,288 pounds of milk, 1,010 pounds of fat, and 880 pounds of protein each year on average. All of this can be found in a country of 550 square miles, about the size of New Jersey, our fourth-smallest state.

Much of the genetic base for these cows traces to cattle purchased from the United States in the early 1950s. By breeding the American Holstein-Friesian to the local cow, the Israelis developed a bovine suited to their region. By taming their environment, they created an oasis in a desert. And by working together and sharing information, they developed tools that advanced the Israeli Holstein to world leader status.

As recently as 100 years ago, there were few domestic dairy cows in the Promised Land. The “milk” in “a land flowing with milk and honey” came primarily from goats and sheep. The birth of the modern dairy industry in Israel coincides with the birth of Israel itself following World War II.

During this time, hundreds of thousands of Jewish refugees, many survivors of the Holocaust, fled to the region then known as the British Mandate of Palestine. In November 1947, the United Nations (UN) General Assembly adopted a plan that partitioned the area into two states: one Jewish and the other Arab. In May 1948, Jewish leaders declared independence for the State of Israel; the conflict known as the “War of Independence” ensued. Israel was admitted to the UN as a full member the following year.

The new nation was a blend of cultures from the Middle East and eastern European. Immigrants brought with them a taste for fluid milk and products made from cow’s milk. But the environment was hardly hospitable to the European dairy breeds of which they were familiar. The land in Israel was either swampy, rocky, or arid. With no lush pastures, little arable land, and a scarce water supply, the Israelis were forced to learn new ways to farm and find a different milk cow.

In 1946, the Israelis transitioned from Dutch to Holstein-Friesian bloodlines with the import of 70 head from Canada. These matings yielded the early Israeli Holstein. With the huge influx of Jewish immigrants post-war came a need for significant numbers of Holstein-Friesians. Most were sourced from the United States.

The first order for 700 heifers, cows, and bulls from the U.S. sailed from Newport News, Va., in November 1949 aboard the S.S. Pass Christian Victory. The Victory made two additional voyages with orders from the Jewish Agency Agricultural Department in the coming months. The cargo was tended by “seagoing cowboys,” young members of the peace churches who jumped at the chance to make a trip of a lifetime.

In all, Israel imported about 18,600 American head, all made possible in part by post-war grants from the U.S. government. The Israeli dairy herd grew to 100,000 cows by the late 1950s.

The Israeli Holstein is slightly smaller than its American counterpart at maturity. It is bred for production, longevity, fertility, and an ability to withstand heat and humidity.

The Jews who emigrated to Israel left behind everything, including their occupations. Though well-trained and educated, farmers they were not. Ironically, this may have suited them well as they brought no preconceived ideas about farming to Israel.

Their mode was to work together, assimilate into the two farming concepts already in place — the kibbutz and the moshav — and build a dairy industry.

The kibbutz, a collective community with communally owned wealth, gave immigrants a place to live and a fresh start. Unique to Israel, the first kibbutz was established in 1912 with a dairy herd. The concept is contemporary even now, with kibbutzim pioneering much of the dairy technology used around the world today. The 163 community farms in Israel produce 58% of the country’s total milk production. Annual per cow production is 27,284 pounds milk, with tests of 3.6% fat and 3.3% protein.

The moshav is a farming village that resembles a kibbutz. Machinery is shared, supplies purchased collectively, and products marketed cooperatively. However, each family maintains its own household and works its own land. The 521 moshavim, considered family farms by American standards, produce 41% of total milk production. Annual per cow production is 25,472 pounds milk, with tests of 3.7% fat and 3.3% protein.

The mindset of shared assets has also extended to information. The integrated data system managed by the Israeli Cattle Breeders’ Association (ICBA) is a computer techie’s dream. Not only does it include information on nearly every cow in the Israeli herd, but information on its ancestors and progeny as well. It is a significant database because nearly all cows are registered, classified for conformation, production tested, artificially bred by Sion (the country’s genetics organization), and cared for by a single veterinary service. Nearly all farms contribute herd management information to the ICBA as do the national milk laboratory and slaughterhouses across Israel.

The whole is indeed greater than the sum of its parts. This collaboration has made possible the development of powerful, multidisciplinary tools for herd management. As well, by focusing on the entire industry, the bell-shaped curve for production per cow in Israel looks very different than it does in other parts of the world, where outliers can substantially impact the average.

A robust dairy industry also hinged on overcoming the hurdles of too little water and too much heat and humidity.

Precipitation in Israel occurs only in winter in the north and very seldom, if ever, in the south. The country has led the way in conserving conventional resources and using nonconventional resources. About 80% of water is recycled for agriculture and public works; virtually every household uses desalinated water. Israeli companies invented drip-irrigation and technology that generates drinking water from the air.

Water scarcity influences the dairy ration as well. Because most traditional forages require irrigation, cows are fed a low-forage diet of 33% to 35% dry matter based on wheat. Crop is seeded in November, harvested in April as silage, and stored in concrete bunkers. Wheat and oat hays are the main forages for dry cows; wheat straw is the main forage for heifers. Nearly all grains and by-products are imported.

Most farms feed a total mixed ration (TMR) to all animals. These TMRs are produced at 20 regional feed centers across the country and delivered to farms twice daily. A central cooperative for storage of homegrown forages and purchased feed has been in place since the 1960s to reduce feed and machinery costs and homogenize ration quality.

Temperatures in Israel during the summer hover around 86°F, with humidity of 50% to 90%. Cows are housed in large, covered loafing sheds lightly bedded with composted manure. Ventilation is provided by large, slow-moving overhead fans. The cow cooling system, which typically occurs in the holding pen, was developed nearly 30 years ago. Each session is a five-minute cycle consisting of 30 seconds of direct watering of cows, followed by 4.5 minutes of forced ventilation. Sessions are provided five to seven times per day.

To further abate heat and humidity, heifers and cows are seasonally bred to calve from August through May to avoid peak milk and matings in the summer. Pedometers are used on most farms to detect estrus and improve conception rates.

Afimilk, the Israeli company that developed the pedometer, earned its reputation for state-of-the-art dairy technology as far back as 1977, when it marketed the first electronic milk meter. Afimilk also developed the first dairy herd management software and the first online milk analyzer with scientists from the Volcani Institute. Another industry first includes robotic milkers, initially installed in Israel in 1999.

Though dairy producers in Israel and America live nearly half a world apart, that distance gets closer each day as technology advances communication, travel becomes more accessible, and businesses operate on a global scale.

Their challenges now look remarkably similar, on and off the farm. Efforts to improve sustainability and reduce the carbon footprint impact production agriculture around the world. Labor challenges are universal. Global warming invokes calamities that pay no mind to borders. Plant-based alternatives to dairy are sprouting everywhere. And consumers in all developed nations increasingly expect transparency in business.

No matter where they live, successful dairy farmers are cut from the same fabric. They are well-trained, adopt technology, seek innovation, demand individual animal information, rely on automation, use management software, keep records, and are willing to share farm data and results.

Israeli Dairy School
Among the institutions with aims to share the country’s experience is the Israeli Dairy School, established in 2010 as a global training center for dairy professionals. Israeli Dairy School offers seminars for local dairy producers and international guests as the five-day Israeli Experience.
The Israeli Experience includes tours to Israeli farms and visits to Israeli sites. It could be described as the sweet spot where history, knowledge, and cows converge.
“From a learning standpoint, I appreciate seeing different approaches to common challenges and viewing problems from a different perspective,” said Calvin Mast, a California dairy producer who participated in the January 2020 seminar. “This is not a typical, commercial Holy Land tour. It is a local experience, carried out by local experts explaining how they dairy, showing you their country, and discussing history in a personal, meaningful way.”
“From this experience, we made new friends and developed deeper bonds with old friends,” continued Mast. “We communicate regularly and look forward to future reunions.”
Phil Kaatz, an extension educator with Michigan State University, is among the new friends Mast met in Israel. He agrees there are tidbits to be gleaned from the Israeli approach to dairying. On top of that he shared, “Where else can you experience the heritage of three world religions — Judaism, Muslim, and Christianity — and enjoy some of the most amazing food on the planet?”
The next international session will be held June 26 to 30, 2022. Visits are also specially tailored for companies, organizations, or other groups of 10 to 20 people. If you are interested in learning more, visit the website at www.dairyschool.co.il/ or contact Ofier Langer at ofier@dairyschool.co.il.
Related