About the Holstein that sold for $1.9 million 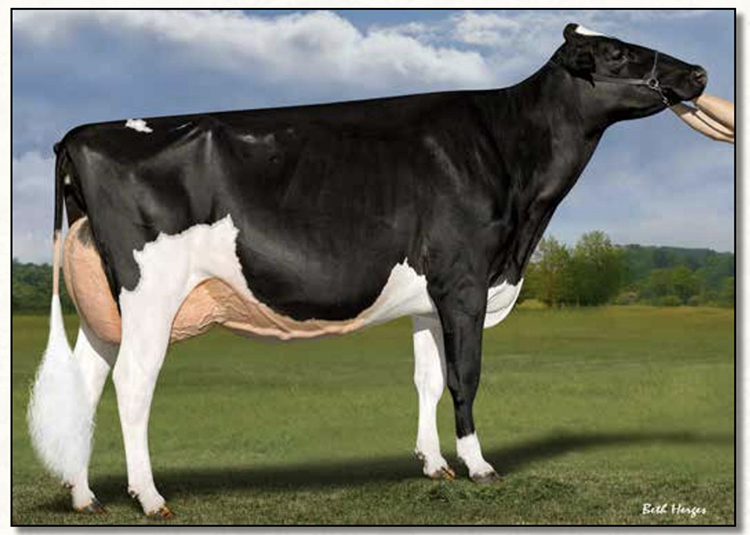 Since selling for a historic $1.925 million on Saturday, June 11, the internet has been a buzz regarding the Holstein cow S-S-I Doc Have Not 8784-ET. Often social media questions center on, “Did that Holstein cow really sell for that amount of money?”

That question is often followed by some variation of, “Why?”

Known simply as “Doc” to many, the $1.925 million cow simply looks good. Classified Excellent 94 at 4 years 8 months old, S-S-I Doc Have Not 8784-ET is scored Excellent 96 in the udder. That’s an incredibly high score for a young cow. However, type alone did not vault this cow into the million-dollar category.

Genomics also played a major factor. In her own right, S-S-I Doc Have Not 8784-ET has a Genomic Total Performance Index (GTPI) value of +2742 and a predicted transmitting ability (PTA) of +2.93 for type.

But that’s just part of the story when it comes to genetic predictions. She has already produced three offspring over +3035 GTPI. So, S-S-I Doc Have Not 8784-ET is a proven transmitter and is making offspring that compete with the very best on the genetic front.

In addition to all these market factors, S-S-I Doc Have Not 8784-ET directly traces back 10 generations to Snow-N Denises Dellia EX-95. That cow ranks among a handful of the greatest cows in the Holstein breed and is the dam of the famous Regancrest Elton Durham-ET.

Then there’s the most important market fact. Not only did S-S-I Doc Have Not 8784-ET sell at the Summer Selections II hosted by Mike and Julie Duckett in Rudolph, Wis., she sold with some 40 pregnancies carried by recipients.

There’s just a little bit more to the story.

While she didn’t show at the 2021 World Dairy Expo, the cow was on the grounds the entire week. Here’s what a long-time show observer had to say.

“Last year, at Madison, “Doc” was considered the most valuable cow on the grounds,” said Dan Cnossen, who for many years lived in Wisconsin and now calls Middleville, Mich., home. “She has the genomic numbers that intrigue many A.I. companies worldwide as well as incredible phenotypic type.”

Unfortunately, the cow took ill the day prior to the Holstein cow show and didn’t make the ring.

“It would have been an epic contest,” said Cnossen, a long-time Holstein guru said of the extremely deep senior three-year-old class at last year’s show. “She is a one in a million cow.”

Indeed, this one in a million cow, along with her pregnancies carried by recipients, sold for nearly $2 million to a group that included AOT Holsteins and Kings-Ransom Farms, both of New York, Tim and Sharyn Abbott of Vermont, and Mike and Julie Duckett of Wisconsin.

Many of the new owners played an important role in developing S-S-I Doc Have Not 8784-ET throughout the generations. Tom Kugler of AOT Holsteins bred the cow’s dam, Fly-Higher Jedi Havenot-ET. Kings-Ransom Farm bred another cow in the direct line, Ms. Kngs-Rnsm Champ Haley-ET. In fact, she’s the first cow after the famed Dellia to carry a prefix other than Snow-N or Regancrest. And, of course, Mike and Julie Duckett already had interest in the outstanding young cow.

Time will tell if S-S-I Doc Have Not 8784-ET walks on the colored shavings this fall in the four-year-old class at World Dairy Expo. If she does, it just may be the most watched class of the entire 55th World Dairy Expo.

But one thing is for sure – this cow is the complete package as she has the potential to compete at the world’s best shows, has an extremely deep pedigree, and is a proven transmitter. The odds are in her favor to have a tremendous impact in the Holstein breed for many years to come. And that’s why her new owners made the investment in S-S-I Doc Have Not 8784-ET. She’s a franchise cow.