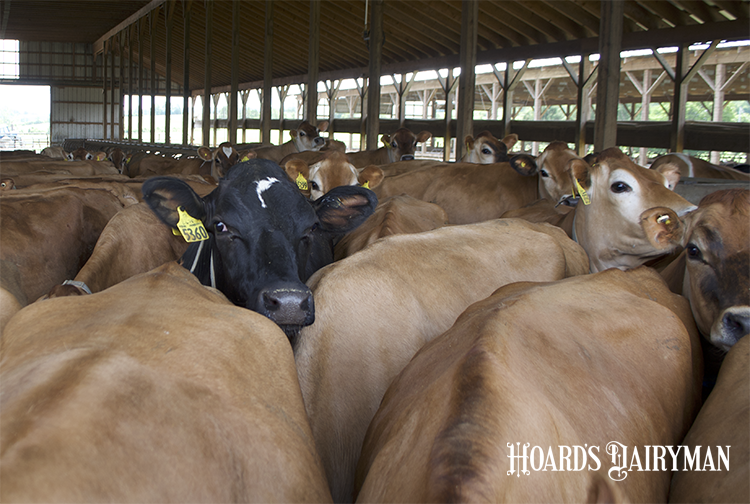 Farmers have their reasons for why they choose to milk a certain breed of cows, and each breed features unique and valued characteristics.

The breeds often compared are Holsteins and Jerseys, the two most common dairy cattle breeds in the country. While Holsteins have historically been the predominant breed, the number of Jersey and Jersey-cross cattle continues to grow. The expansion of the Jersey breed has taken place as farms were looking to milk smaller cows that were more space and feed efficient.

A recent Michigan State University study looked into the Holstein versus Jersey debate once again, evaluating costs and revenues of cows of both breeds managed in the same manner and location on three farms. They assessed breed differences in milk revenue, milk bonuses and discounts, feed costs, cost of herd replacements, and value of cull animals and calves not kept as replacements.

The Jerseys were found to be more feed efficient, producing 1.75 pounds of energy-corrected milk for every pound of dry matter consumed compared to 1.67 pounds for Holsteins. The feed cost per pound of fat was $1.82 for Jerseys, while it cost $1.97 per pound of fat produced by the Holsteins.

Overall profitability, though, went to the Holsteins. On average, the Holsteins on these three farms were $456 more profitable annually than the Jerseys. Most of that revenue advantage (77%) resulted from 810 extra pounds of components produced annually.

On farms with both breeds, each cow – whether a Holstein or Jersey – takes up the same space in the barn or in the parlor, but the average Holstein will produce greater volumes of milk and components over a lactation, further diluting the fixed costs associated with production compared to Jerseys.

The Michigan researchers looked to see if milk component prices, bonuses, or discounts would change the overall profitability, but they did not make a notable difference. They did point out that improving the Jerseys’ milk production, perhaps from 60 pounds to 70 pounds per day, while maintaining Holstein production at its current level would even out the profitability between the two breeds. In addition, new facilities that can incorporate smaller stalls and more head per barn would be able to take better advantage of the efficient Jersey cow.

In this study, the Holstein cow’s ability to produce more milk offset the greater expense associated with more feed consumption. However, individual farm features, preferences, and measures of profitability and efficiency would come into play in determining which breed is the best fit for each operation.