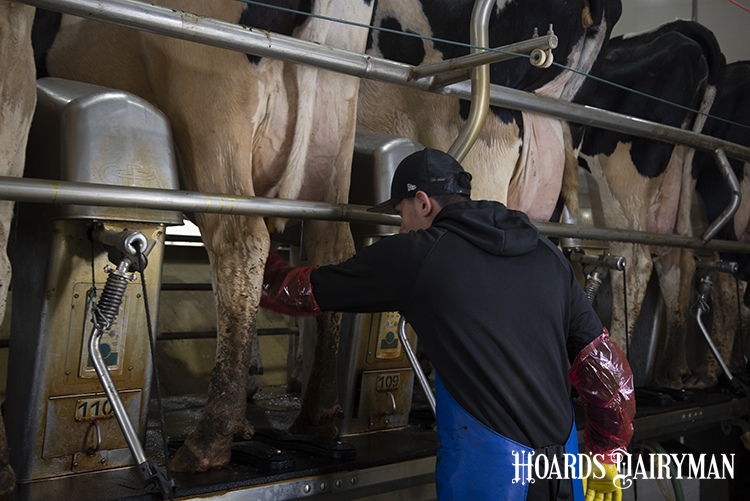 This month marks a full year of declining U.S. milk production growth. Beginning last June . . . within the space of four months . . . production growth downshifted from 4.6% annual growth to nearly 1% under a year ago by September – an almost unprecedented drop over that short a space of time. Monthly production has subsequently remained solidly below a year ago, except for a less than 0.1% rise last October.

This extended absence of the buoyancy typical of the output of America’s dairy farms has both generated – and resisted – a growing string of record-high milk prices, which normally would spur a quick rebound in production. So far, this hasn’t materialized. Together, these two factors form the dominant and defining feature of the current dairy situation, with the extremely high production cost and disrupted supply chain situations forming a critical link between the two.

The chart shows year-over-year changes each month for four key aspects of U.S. milk production over the past several years. The average level of monthly changes from September 2021 through May 2022 are:

This unusual and prolonged period of constrained U.S. milk supply has generated a strong milk price runup, as domestic demand for dairy products, particularly in food service, has been recovering from the pandemic, and export demand has increased in the face of lower milk production for other major world market suppliers as well.

The USDA-reported U.S. average All-Milk price, the standard measure of milk prices received by U.S. dairy farmers, achieved three consecutive record highs this year in March, April, and May, of $25.90 per hundredweight (cwt.), $27.10 per cwt., and $27.30 per cwt., respectively. Under normal circumstances, such high milk prices would quickly stimulate increased milk production and consequently lower prices. But in this year’s dairy economy, cost inflation and supply chain disruptions have affected virtually all inputs needed to milk cows, so production has remained constrained and prices have escalated, at the farm, wholesale, and now retail level.

Retail price inflation, which has generally not been a problem in dairy, has risen sharply in recent months and is becoming an important factor to watch in its effects on consumer demand. During the seven years from December 2014 to December 2021, the Consumer Price Index (CPI) for all dairy and related products, with the monthly average during 1982 to 1984 being equal to 100, barely budged from 228.7 to 234.6. Over the same period, the CPI for all food and beverages increased from 245.8 to 286, and the CPI for all items rose from 236.3 to 280.1, with the same basis of 100.

But just five months later, the May dairy CPI had shot up to 258.3, boosting most individual dairy products into the double-digit percentage range of annual inflation, while the food and beverage and overall annual inflation rates have still remained below 10%.

Given all this, the U.S. dairy industry will get a rare chance this year to see just how “inelastic,” or insensitive to prices, domestic dairy consumption really is. It will also get the chance to see just how high prices have to go to spur a production response. In sum, 2022 is shaping up to be yet another “unprecedented” year in dairy – and one that, despite the record revenues coming in, may have many in the industry wishing that a merely “precedented” dairy economy may soon return.