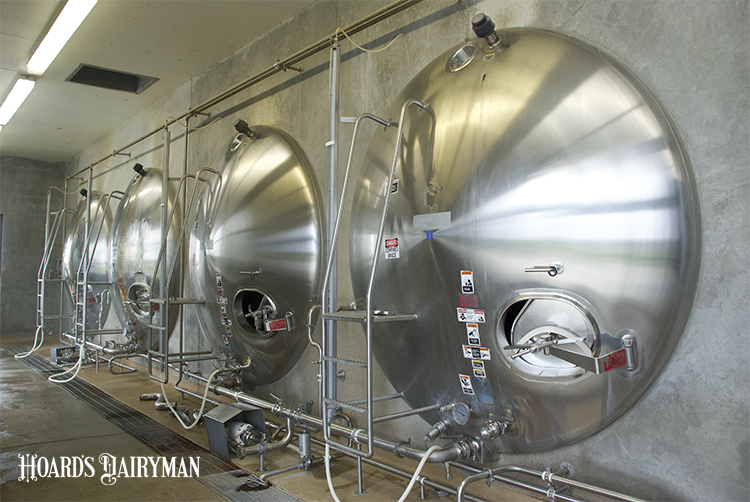 As milk handlers deal with growing challenges to get milk from farms to clients and more milk is produced further away from population centers, it would seem that having more storage on the farm would be a logical response. And while more storage is never a bad idea, it doesn’t really solve the larger problem, agreed three milk transportation experts on the August 31 Hoard’s Dairyman DairyLivestream.

“The milk still has to leave the farm,” said Corey Gillins, chief operating officer of Dairy Farmers of America’s (DFA) seven-state Mountain Area Council. More storage can get you through a hiccup in operations, but in the long term, it only delays the problem. “What will happen is that doesn’t become excess storage capacity; it just gets filled up and now you’re just that many loads behind.”

Jeff Sims specializes in the logistics of moving milk in the dairy-deficit Southeast and the Southwest with Lone Star Milk Producers. He agreed that more storage is better if possible. Still, it isn’t a long-term solution for dairy farmers. “You haven’t solved the problem with more storage. You’ve only delayed having to answer it,” he recognized.

In addition to more storage, farms may consider bigger tanks. That can be done well, but in other scenarios where the tank and truck hookups vary, it can create more backups. For example, Roger Nordtvedt explained that in his time with Southeast Milk Inc., a truck with a 1.5-inch head on the pump and 2-inch line would be hooking up to a tank that has a 3-inch outlet.

“Your hauler’s sitting out there for almost two hours to pump an 8,000-gallon tank,” he said. “Instead of getting to places, he’s standing around for two hours watching that tank so it doesn’t overflow.”

On the other hand, some processing plants across the industry have put up more storage so that they can accept milk even if they are not processing over, say, a weekend or holiday, added the University of Wisconsin-Madison’s Mark Stephenson. In those situations, the milk is at least already at the plant instead of taking up space on the farm miles from the processor. When trucking and labor are available to do that, it can be a useful way to be adaptable with milk supplies.

One consideration that would not shift how milk got to plants but could provide flexibility on where plants could be located or how milk left the facility to get to consumers is ultra-high temperature (UHT) shelf-stable milk. UHT milk has been widely adopted in other places around the world but not so far in the U.S. It may be an option for places like the Southeast, where demand for fluid milk is higher than what is produced in the region. In that case, some of the storage needs would be shifted to consumers as they would buy packages of UHT milk that could be refrigerated as necessary. It will come down to consumer acceptance but could be part of the conversation moving forward, Stephenson said.

To watch the recording of the August 31 DairyLivestream, go to the link above. The program recording is also available as an audio-only podcast on Spotify, Google Podcasts, Apple Podcasts, and downloadable from the Hoard’s Dairyman website.

The next broadcast of DairyLivestream will be on Wednesday, September 14 at 11 a.m. CT. As of January 2022, we moved to a new system. If you have not yet, you will need to re-register to continue receiving email updates and links to the webcasts. You can sign up here now. Registering once will sign you up you for all future events.