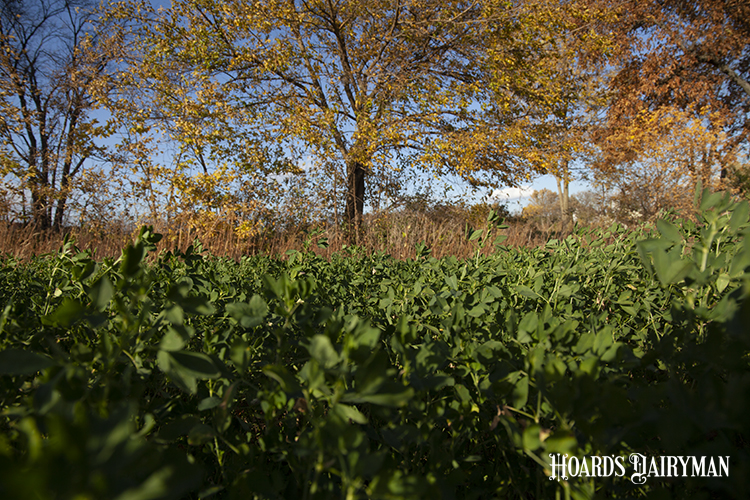 Although we still have plenty of loose ends to tie up for the 2022 growing season, it isn’t too early to think about the year ahead. When it comes to alfalfa, Kevin Jarek, a county-based crops and soils agent for the University of Wisconsin-Madison’s Division of Extension, reminded that the buds for first crop alfalfa are formed in the fall.

“The decisions we make now really can have an impact on those fields,” he said during a recent Badger Crop Connect webinar.

Jarek said there are two major contributors that can lead to problems next spring. The first is severe winter weather, which is out of our control, but there are a few management practices that can help protect against these weather extremes.

Cold temperatures, below 12°F, can kill alfalfa plants, Jarek noted. Since Mother Nature doesn’t always provide enough insulation in the form of snow cover, it is suggested to leave 4 to 6 inches of stubble in the field to act as cover and insurance in case snow cover isn’t adequate.

Ice sheeting is also a hazard when it completely covers and smothers plants. Tiling fields to drain excessive water can help prevent this, along with leaving stubble for insulation.

When the ground goes through freezing and thawing cycles, plant heaving is a risk. While the soil type and texture impact the severity of this issue, Jarek said that tiling to remove extra water may also help with this.

Another weather event that seems to occur more in recent years throughout the Upper Midwest and the Northeast is warm midwinter periods followed by sudden cold temperatures. This causes plants to break dormancy and then be more susceptible to cold damage. Jarek’s recommendation was to select more dormant alfalfa varieties.

While we can’t control the weather, Jarek said, “We do have control over crop management decisions that are being made during this growing season and those can have a lasting impact.”

To extend an alfalfa field’s life, Jarek offered a few suggestions. The first is to let one cutting go to half or full bloom during the season to allow the stand to rest and restore its depleted carbohydrate reserves.

When it comes to a late fall cutting, Jarek said this should occur when there are fewer than 200 growing degrees day left in the season or when more than 500 growing degree days are still expected. If you take a late cutting, he said to be sure to remove the alfalfa from the field and not leave it out there in windrows, as that will smother the alfalfa below.

As for potassium, “We have to replace that potassium that was removed during the growing season,” Jarek continued. Approximately 60 units of potassium (K2O) are removed per ton of dry matter harvested. If a field yields 4 to 5 tons of dry matter, Jarek said it takes 240 to 250 tons of applied K2O to get stand back to where it should be.

With pH, he noted that this has become more problematic over time. Jarek suggested pulling soil tests and plant tissue samples so the right adjustments can be made.

Another way to improve stand life is to get a crop harvested and out of the field in 48 hours to avoid wheel traffic on growth. In addition, Jarek said to avoid driving on fields when they are wet to prevent compaction.